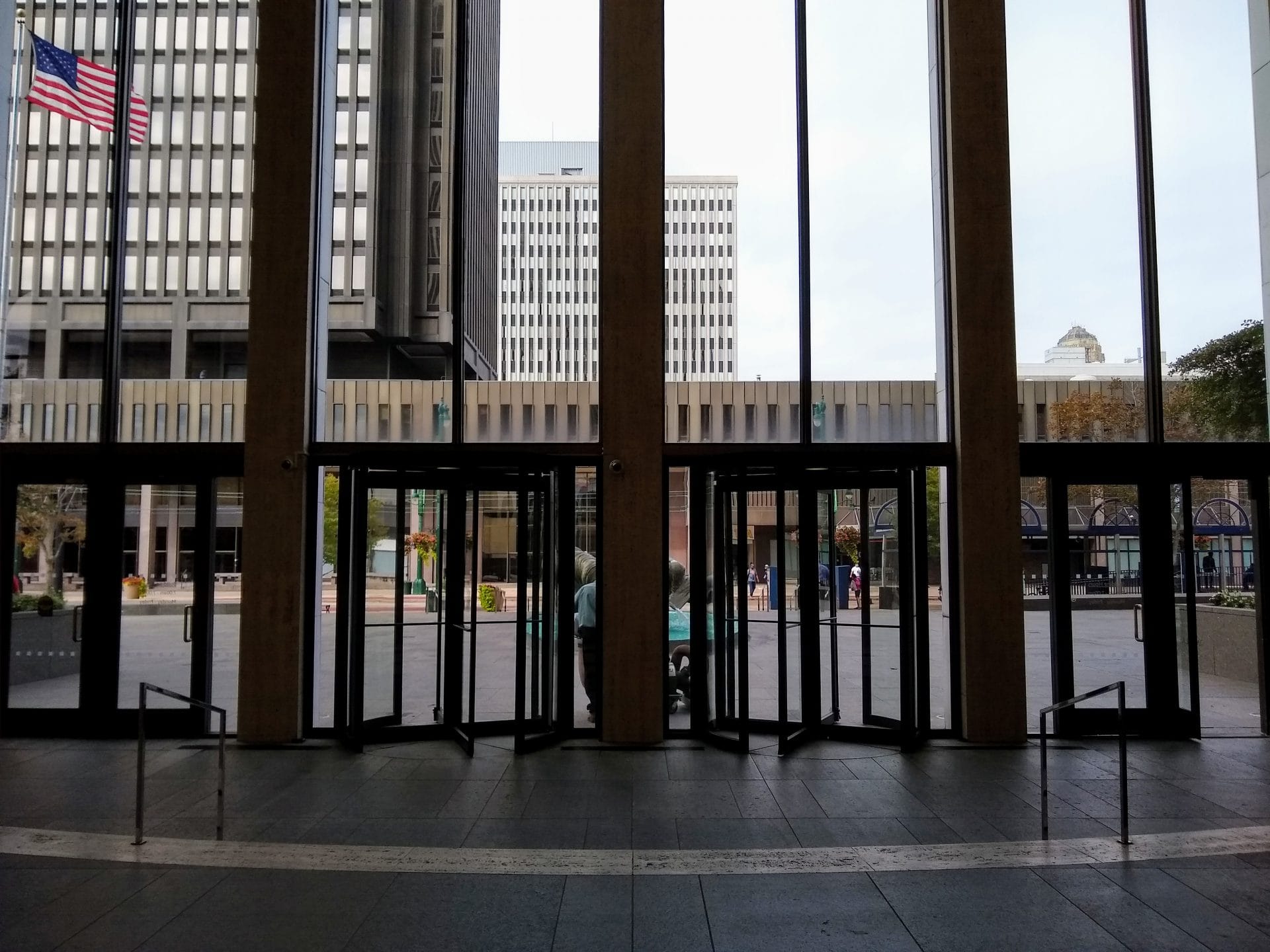 A couple of days ago, on the anniversary of the World Trade Center attack, I got to thinking about the Twin Towers in NYC, One M&T Plaza here in Buffalo, and their common designer/architect, Minoru Yamasaki. 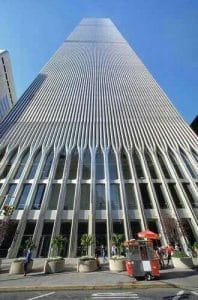 Photo Credit: Nancy Wohlfeil. One of the Twin Towers pre 2001. Looks like a photo I would have taken, doesn’t it? 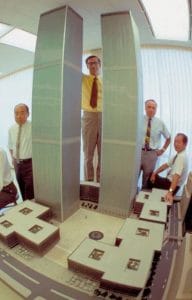 You could say that One M&T Plaza is another one of our architectural treasures that is hiding in plain sight.   We pass by it all the time.   We watch bands there every weekday in the summer.   We run over there to grab a quick bite from a food truck, or to do our banking on our breaks.   But do we ever really look at it?   Or even recognize it for the masterpiece that it is, or for the incredibly talented architect who designed it?

Let’s start with the architect.   Who was Minoru Yamasaki?

Well, he was born in Seattle, Washington in 1912.   Yamasaki was a second generation Japanese American who put himself through college by working at a salmon cannery for 17 cents an hour.   Seeing the elderly men working in the cannery, he became very determined to take his life in a completely different direction.

His uncle, architect Koken Ito, visited the family and showed Yamasaki plans for the U.S. Embassy Building in Tokyo. It was then that Yamasaki set his sights on becoming an architect.   After graduating from Washington State University with a Bachelor’s Degree, he went on to receive a Master’s Degree from New York University.

Early in his career, Yamasaki was heavily influenced by the practicality and austerity of the modern or international style of architecture.   But in 1955, he traveled to Japan to get some ideas for a U.S. Consulate building in Kobe. While he was there, he was particularly struck by the temples hidden among the commotion of the city streets.   The beautiful, calm, serene effect that was achieved in these designs fascinated him. 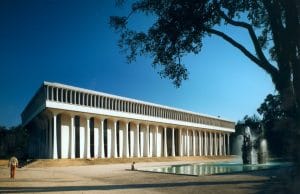 He set out to perfect the art of delighting the senses while using modern building materials such as concrete and steel.   His designs always drew attention, but not always in a positive way. They were criticized for being both too dainty and later too great and powerful looking.   I guess it’s true what ‘they’ say, beauty is in the eye of the beholder.

While working for Duane Lyman and Associates, Yamasaki was commissioned to design One M&T Plaza.  Executives at M&T had a vision of a serene place for their employees to work unencumbered by poor design, with a place out of doors, in the sun to relax during break times.   They wanted their employees to enjoy being at work, feel stress free and surrounded by beauty. In 1966 that was quite a change in vision from the Ellicott Square Building across the street, which was built in 1895 and advertised as the “place where you can get two days worth of work done in one day”.   It seems to me that in 1966 we were moving in the right direction. And Yamasaki was just the person to design this building. 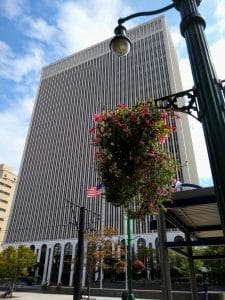 It’s in the International style like almost all of Yamasaki’s designs and has 21 stories.   It’s a classic tripartite design, which simply means that the design has three sections.

The first floor with high ceilings and tall arched windows, faced with marble in white and green, the green being on both the north and south elevations make up the first section.   It’s followed by the office block which houses narrow windows, and piers made with concrete aggregate with small pores that self clean the building when it rains. (It’s effective too. Think about it, you’ve never seen this building appear dirty like some others.   Case in point, the Rand Building.)   The office block is topped by the third and final section, which is a series of white verticals with just a slight hint of a cornice above.   These three are the basis for most modern skyscrapers. 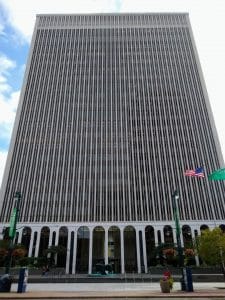 As a side note, Yamasaki designed the windows to be tall and narrow with very narrow piers.   This is said to alleviate that woozy feeling that accompanies the fear of heights from the inside of the building. He did this on all of his tall buildings you see, because he was afraid of heights. Can you imagine? A designer of skyscrapers, afraid of heights?

The steel for the frame was purchased from Bethlehem Steel here in Buffalo, and wraps around the outside of the structure leaving the inside of the building wide open at the center.   The spine at the back of the building on Washington Street houses all the utilities and elevator shafts, allowing for this great openness on the inside.

Incidentally, this spine was built of concrete in a process known as slipforming, a method of construction in which concrete is poured into the top of a continuously moving formwork.   As the concrete is poured, the formwork is raised vertically at a speed which allows the concrete to harden before it is freed from the formwork at the bottom.   Slipforming was used extensively in Buffalo in the building of our grain silos. 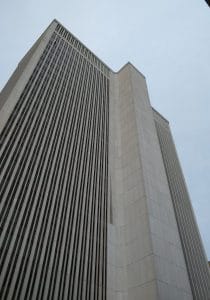 The fountain outside the Main Street entrance was designed by famed sculptor Harry Bertoia.   The curves of the sculpture contrast nicely against the straight lines of the building itself.   The fountain is designed to make you feel as if the water flows out of the sculpture itself onto the ground of the plaza, which is entirely stone, in M&T signature green.   That same stone continues right through the front doors and into the enormous open lobby. 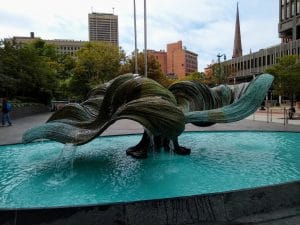 And the lobby is impressive.   You only need to walk through the door (use the revolving door for the full effect) to be awed by the sheer size and openness of it!   I’m told on this visit today that there will be a reorganization of the lobby in the coming months and will be completed in early 2020. 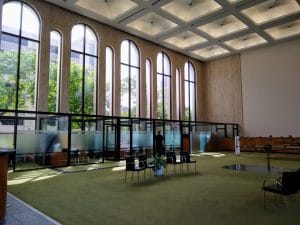 The photo above was taken by me today 9/13/2019.   I’m told the chairs in this photo will be replaced with the original chairs (below) when the reorganization of the lobby is complete. 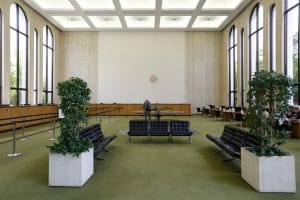 Think for a moment about Manufacturers & Traders Trust Bank (M&T).   It was founded in Buffalo in 1856, as Manufacturers and Traders Bank by two very prominent Buffalo businessmen, Hascal Pratt and Bronson Rumsey. That’s 163 years ago!   And M&T has maintained a very strong presence here ever since. Even when businesses and people alike were leaving Buffalo in droves in the 1950’s, 60’s & 70’s, M&T stayed.   And on top of that, just as everyone else was leaving, they hired one of America’s best architects to build this building in the heart of the downtown business district, with a clear vision for their employees. 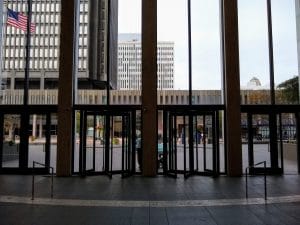 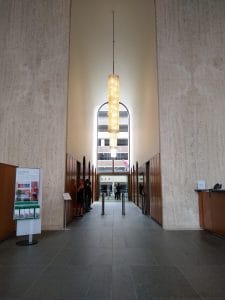 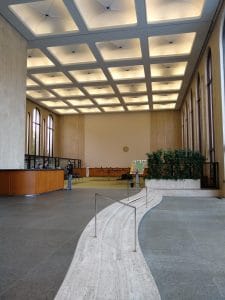 A place to work in relative serenity.   A place to sit in the sun and relax on breaks and at lunch time.   Anyone who works or spends any time downtown knows that this is exactly what happens in the plaza that surrounds the building.   Especially in the warm months. Yamasaki realized that vision in both the building and the plaza. 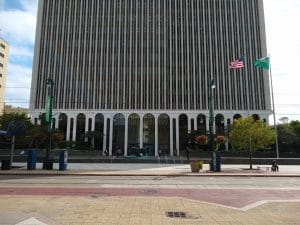 As I sit on the wall in the sun today outside One M&T Plaza, I am grateful that Yamasaki didn’t live to see the horrifying fate of his World Trade Center and the massive loss of lives on September 11, 2001.

But I do sort of wish he could sit here with me today, seeing his plaza at the M&T Building still being used fifty some years later just as he had intended.

If you have never experienced lunch hour at M&T Plaza, head over to the corner of North Division and Main Street to take in some rays, sit back and relax for an hour and just enjoy the people and the plaza.

And don’t forget to head inside to see that awe inspiring lobby!

Share your thoughts on One M&T Plaza in the comments below. 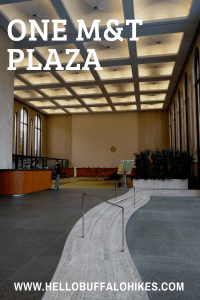