An Unexpected Surprise in Taughannock Falls 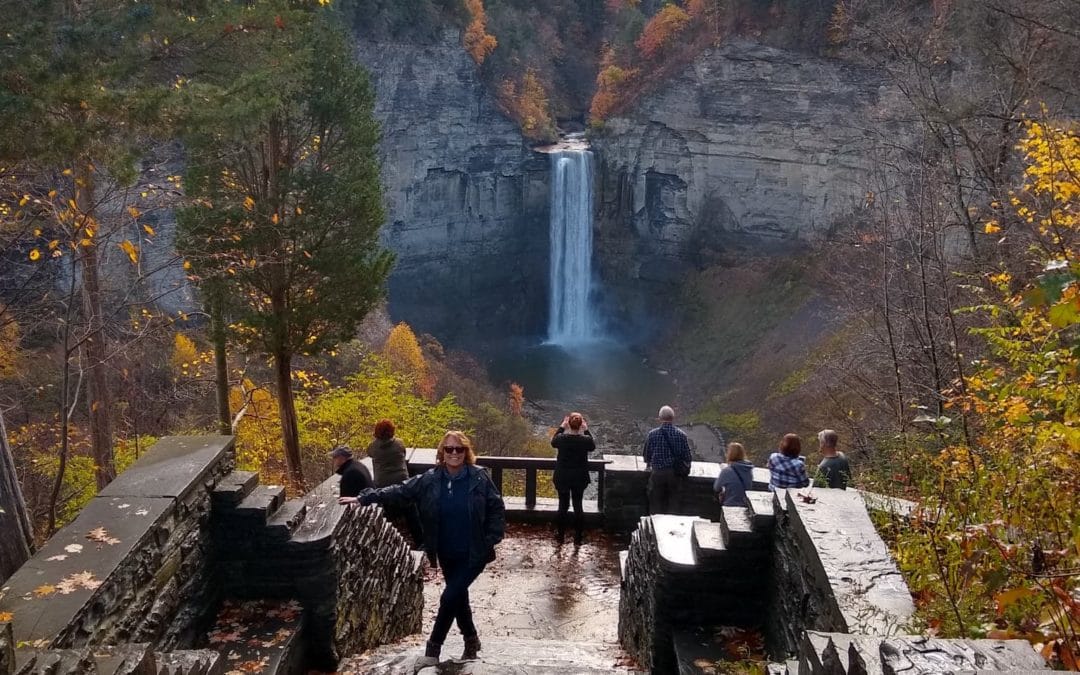 The weather didn’t seem to be cooperating with his hopes for a good first race. But, we like to think we’re adventurous, so off we went on the roughly 2 ½ hour drive from Buffalo.

Enchanted from the Get-Go

Taughannock Falls State Park was easy enough to find, and the photo below is what greeted us off to the right as we entered the park.  Welcome. Even though it’s cold and rainy.

As we pulled in, I was immediately taken in by the charm of the park.  The fall colors seemed brighter because everything was wet. Even though the weather was almost terrible there was excitement in the air given off by the runners in anticipation of the race.  They greeted each other warmly despite the cold.

The park is on Cayuga Lake, and knowing my love affair with water, I was of course, drawn to it.  The rain continued as a drizzle but that didn’t affect the view.

One of my favorite views was of the marina.  It was so quaint. I know that sounds trite, but it really was. Old fashioned, no frills, and very picturesque.  It was like stepping back in time. I could picture the many families over the years, launching their boats for a day on the water.  Just lovely.

I Had To Get a Closer Look

My friend Margy and I took a walk over to that waterfall I had seen on the way in to get a closer look.  The charm of the park itself continued to draw me in.

Race time came.  The rain abruptly stopped and the sun came out.  The timing couldn’t have been more perfect. The teams were so enthusiastic, I couldn’t help but feel their excitement.  And they were off! Into the woods they went.

I roamed around taking pictures in the park while they ran.  Check out these giant leaves we found! We think they were from the huge sycamore trees that were scattered throughout the park.  Any dendrology enthusiasts want to confirm this?

Tim and his team finished the race, and earned the most points that week in the race series, and Tim had a good run.  This added to the magic of the day for us.

We had other plans for the day in addition to the race.  We wanted to hike to Taughannock Falls. Neither of us knew beforehand that the hike WAS the race course.  So Tim did it twice. And what a beautiful course it was. I can see this hike being beautiful in all four seasons.  And we may make plans to see it in all four. It’s that gorgeous.

It’s an easy hike too.  The path is wide and well cared for, easy to navigate, it would be tough to get lost, and the payoff (the views) are well worth it.  Depending on where you start, the hike is between one and a half and two miles, round trip, so it’s a pretty quick hike too. Plenty of time for the many pictures you’ll want to take along the trail.  No fancy gear necessary either.

What Else is there at Taughannock Falls?

A little investigating told me the park offers camping as well.  Both tent sites and cabins. Putting it on my list for next summer.  With Cayuga Lake right there, and the hiking trails, I know we’d love exploring this place some more.

The next thing we wanted to do was hit a bar.  Go figure. Years ago, Tim took a road trip with his brothers, sister, and probably a couple of friends too.  They went to Owego to visit some old friends.

I should explain that Tim’s oldest brother Dan, who has sadly passed, always seemed to know bars in the most obscure places. If you mentioned some small town you drove through in another state, he’d say, “Oh hey, did you happen to see (fill in the blank) bar?  They have the best (fill in the blank) there.”

On that particular trip to Owego Dan had them stop in Trumansburg, NY to go to a bar he knew called The Rongovian Embassy, a dive bar (they are all dive bars, they’re our favorite kind) that had the best lobster bisque he ever had.  I had been hearing about this place for 35 years, so in honor of Dan, we decided to drive the 10 minutes to Trumansburg to check it out.

A quick online search earlier in the week told us what we had suspected, that The Rongovian Embassy was no longer open, having closed only two years ago.  Why did we put off this visit for so long? The good news is that it’s now a brewery and we decided to go anyway. The owners were friendly and the beer was good. I was tempted to try the “Coping with the In-laws IPA, because of the nature of the visit.  But I really love my in-laws, and I prefer lagers, so I went with some of the last of their Octoberfest instead. It was delicious.

The real hit of Trumansburg 35 years later was Trumansburg itself.  So lovely. There were friendly people willing to talk to us about what it used to be like.  Great old buildings, yet with a really modern feel. This town knows who it is.  They are small, and they embrace it. They’re local, because they understand it. They support each other and it shows.  Would love to spend a few days here exploring. It could never be considered a tourist destination, but I’m putting this on my list anyway.  I want to get to know Trumansburg.

The last item on our ‘to do’ list today, was to take a leisurely (20 minutes or so) drive into Ithaca for some dinner.

At this point it was drizzling again, but when we saw a sign that said “Overlook” we made the turn.  And this is what we saw. Well worth stopping!

The route into Ithaca itself was scenic even through raindrops.  Not having made plans in advance of where to stop, we relied on google maps to direct us to The Boat Yard Grille, where we had a truly scrumptious dinner.

My Impressions of our Day Trip to Taughannock Falls

We headed home, talking all the way about what a great day we had.  How we should have figured out a way to spend the night, but we just couldn’t make it happen, too many other commitments.  And how next time we’d spend a few days.

This is the way a road trip should feel.  Like you don’t want it to end. A real memory maker.  I’m smiling to myself as I’m writing this because the day started out so bleak and cold, and ended with such a warm feeling for Taughannock Falls, for Trumansburg and even Ithaca where all we did was eat.  Glad we dragged ourselves out of bed when it would have been so easy not to.

Next time you’re thinking of a day trip from Buffalo, consider Taughannock Falls State Park, Trumansburg or Ithaca.  All three will enchant you.

p.s.  We owe it to the Checkers Cross-Country team for putting Taughannock Falls on our radar.  By the way, the team went on to win the cup in the Pete Glavin X-Country Series 2019. Couldn’t be happier for them.  They worked hard recruiting new team members and training for the series. No team is more enthusiastic than Checkers XC! Awesome win!