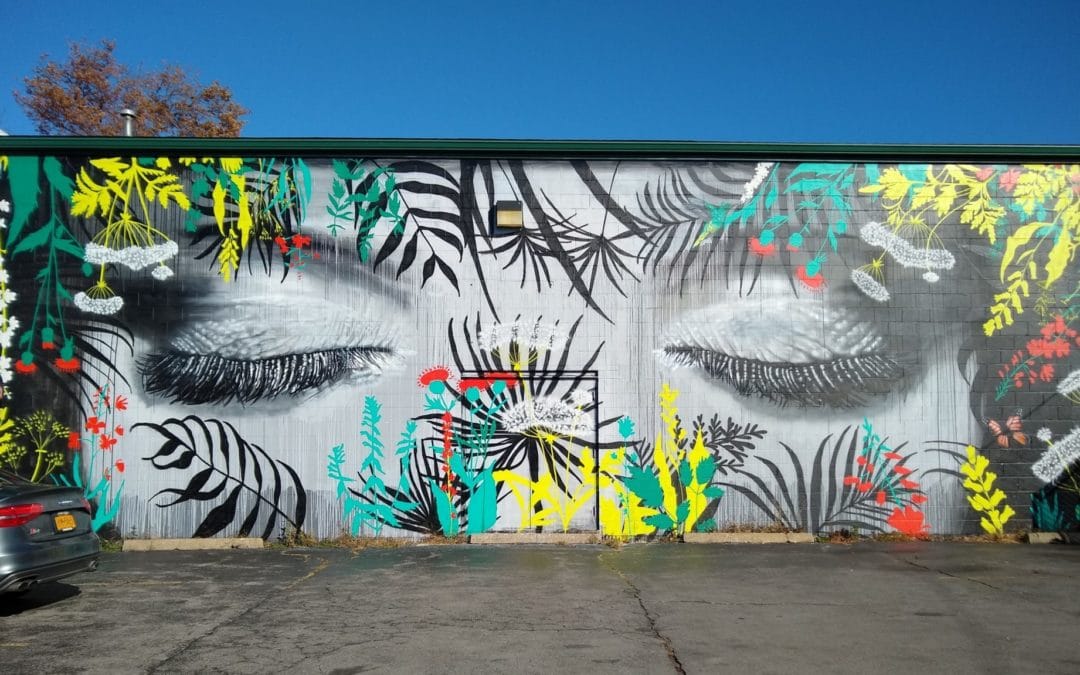 For those of you who don’t live in Buffalo:  Allentown, the Elmwood Village and the West Side are all neighborhoods within the city of Buffalo.  As I sit down to write this, it occurs to me that I should have begun this series in Allentown.  Because the street art movement in Buffalo really began there.

In Part 1 of this series, I mentioned a time when street artists used to (some still do) go out in the dark of night and create.  Illegally. They were constantly looking over their shoulders to make sure they were not getting caught. Some were arrested.  Some went to jail.

In 2013, the Allen Street Street Artists Collective was organized by Buffalo historian, businessman and arts supporter, Mark Goldman in conjunction with the Allentown Association.  The goal of the collective was to legitimize the artwork done by street artists, to enhance the neighborhood through art and to provide legal work for the artists.

Mark Goldman dedicated his work on Allen Street to his late brother, Tony Goldman, who was a well known street artist in New York City and Miami.

Since 2013, the art on the buildings in Allentown has changed some, a few of the original paintings are still there and are noted as such below.  Street art, or public murals, was once described to me as temporarily permanent work.  Must be strange for an artist to know that their work will one day deteriorate and eventually be removed and/or replaced.

I for one am glad that they continue on with their work, to our benefit. 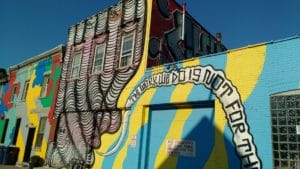 “The work we do is not for the faint of heart.”  This is a quote from Tony Goldman, street artist.  This is the tribute wall that was created in 2013, in honor of Mark Goldman’s deceased brother Tony Goldman, who was himself a street artist, and created large street art displays in both New York City and Miami, by purchasing large scale buildings and hiring talented street artists from all over the world.  Tony Goldman was the inspiration for the Allen Street Street Artists Collective. While writing this post, I was walking on College Street in Allentown, and saw that this work, and the following two, were being painted over, and some construction was taking place inside the building.  See photos at the end of this post* Temporarily permanent.

Located at 245 Allen Street – Rear of Building (Lower) – photo below

This work is based on the Iron Firemen (huge boiler systems) found in old industrial buildings of the Rust Belt.

The artist of this work is described by other Collective artists as reclusive and chooses not to talk about his/her art publicly.  He/she also changes his street name from time to time so as to keep his/her identity unknown. Makes me wonder if it is perhaps a public figure who created this mural.  This is the second of three that has been painted over this week.  See photos at the end of this post*  Temporarily permanent.

Located at 245 Allen Street – Rear of Building (Upper) – photo below

Chino grew up in Brooklyn, NY surrounded by graffiti.  He mainly painted his name on the subway walls while he lived there.  He moved to Buffalo in the early 90’s and would only paint occasionally here because he felt that Buffalo was very clean and it didn’t feel right painting here.  He impressed the other artists in the Collective though, and was asked to participate in the project. This is the third and final mural that has been painted over this week.  See photos at the end of this post*  Temporarily permanent. 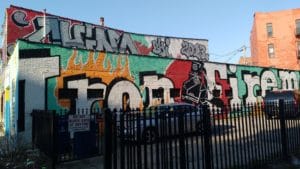 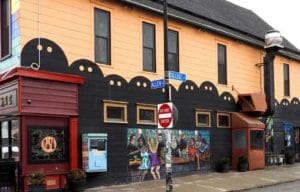 Julian Montague was part of the Allen Street Street Artists Collective.  Earlier he had a project where he created “fake” books by creating new covers for existing books and giving them new names.  One of these “books” he titled “Secondary Occupants”. He used the cover of this book to create a mural. He describes it as cutting the building in half using these creatures with eyes that appear to be watching us as we go about our business in Allentown. 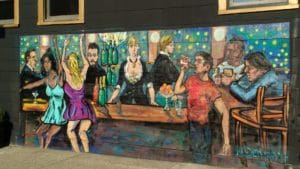 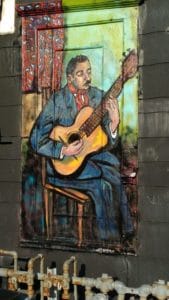 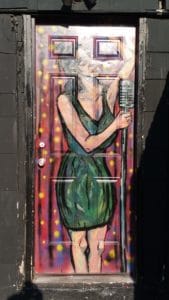 I don’t know too much about this series of paintings contained within the lower half of “Secondary Occupants”.  Done by Nicolas Delfino, they do fit in nicely with the whole Allentown neighborhood, and is perhaps a collection representing the spirit of Allentown. My opinion. 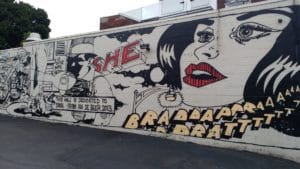 What sets this mural apart from every other mural in Buffalo is that the artist never actually painted the mural.  Ian DeBeer was incarcerated for graffiti art vandalism crimes in New York City, and as a stipulation of his parole he could not use or possess any street art tools.  He created this mural with charcoal on tracing paper, then worked with projection artist Keith Harrington to have the mural projected onto the side of the building. The mural was then painted by artists of the Allen Street Street Artists Collective under DeBeer’s direction.

Spain Rodriguez was a comic artist from Buffalo who also dabbled in street art.  DeBeer became familiar with his work while in jail. He created this mural as a tribute to Rodriguez’s cartoon that memorialized a fight he had gotten into in a bar on Allen Street called (at the time) The Jamestown, now Nietzche’s.

It’s the back story that makes this mural for me.  So interesting. 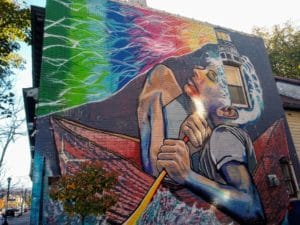 Chuck Tingley painted this in 2014, and has now become one of Buffalo’s most prolific and popular artists.  This mural was inspired by the ability to persevere and overcome adversity in the form of gender and race bias.  The boater is making his/her way through the darkness, being led by the light from the lighthouse. The way the lighthouse is located in the boater’s head leads you to believe that he/she is really following their own inner light.  It’s beautiful, no? 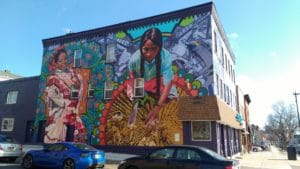 Casanas was invited by the Albright Knox as part of their Public Art Initiative to create a mural celebrating the contributions of the Hispanic and Latino communities to the economic and cultural growth of the entire West Side neighborhood.  She worked with community members to design the mural itself, and with volunteers to actually paint the mural, making it a true community effort, headed by Casanas.

Covering two sides of the building, and depicting both immigrant and indiginous people, this mural is a true celebration of the community it brightens. 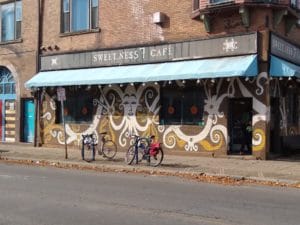 Prish Moran purchased the building at 220 Grant Street in 2007.  When I met with her in 2017, Prish told me she painted the lower half of the building brown because it was covered with graffiti.  Not the good kind. She decided to paint something else to make it look a bit nicer. She went through the folders of pictures she tears out of magazines to save for inspiration, and found a photo she liked.  So she painted her own version of it on her building. She makes it sound so easy!

One day, she was working in the (at the time) unopened cafe when there came a knock on the door.  She answered it to a gentleman from the refugee resettlement center who was with several women refugees.  He explained that he was taking the ladies on a tour of the neighborhood to show them around and when they came upon Prish’s building the women cried tears of joy having seen the mural which was, unbeknownst to Prish prior to this, the Burmese God of Happiness.  The women were from Burma, and stated that they now felt at home in Buffalo having been welcomed by the God of Happiness himself. Prish says that the Burmese women from the neighborhood have been touching the mural when they walk by ever since. Great story, and a beautiful mural.  Thanks for sharing both Prish.

Welcome to the Iconic Elmwood Village   2018 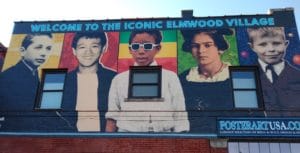 This is a fun mural that was made possible by Marc Corsi, owner of the Poster Art Store housed in the building.  He wanted to use childhood images to showcase a diverse group of icons and legends. Included in the background of each icon are clues to their identity, leaving the beholder with the task of identification.

Not gonna spoil the fun and tell you who they are.  You’ll have to figure it out yourself.  Hint: They aren’t necessarily Buffalonians… 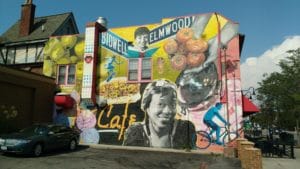 This mural is a happy-go-lucky look at Elmwood Village life, from the Bidwell Farmers Market, to Jim’s Steak-Out, to the cyclist to the skateboarder.  Life is good in the Elmwood Village, a neighborhood that was named one of the country’s 10 best neighborhoods by the American Planning Association.  Indeed, it is home to some of the city’s best shops, restaurants and art galleries, not to mention the beautiful homes!  I took this picture in 2017, but now this painting needs work, or…temporarily permanent? 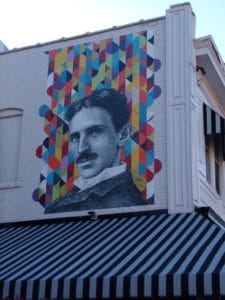 This mural is a nod to Nicola Tesla who is credited with bringing electricity to Buffalo.  Commissioned by 40 Thieves Restaurant, Rory Allen is the artist with Zoom Copy. 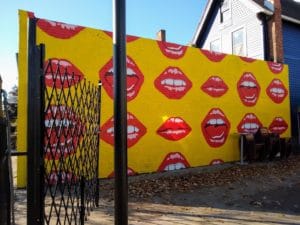 This mural was a collaboration between Bureau (owners Jon Eisenberg and Joseph Stocker) and Klub Weimar.  They wanted to give back to the community.  It was meant to be both provocative and family friendly at the same time.  Sort of like the neighborhood itself.  Pretty sure the Rolling Stones would approve. 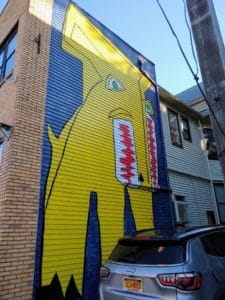 Luplow grew up in Batavia, and after a chance meeting with Bureau owners Jon Eisenberg and Joseph Stocker in Arizona, came to give Buffalo this fun, quirky mural on Elmwood.  Having visited the Albright Knox regularly as a kid, Luplow always dreamed of having one of his paintings on display in the Albright Knox.  He reportedly figures having this mural on Elmwood for all to see is the next best thing.

This mural was done as part of the Flutterby Festival held here this past August.  The festival is intended to raise awareness of environmental concerns.  According to Tingley, he depicted the eyes closed because they can represent anyone, of any ethnicity.  He also wanted to bring attention to the fact that so many of us are closing our eyes to the worlds environmental issues.  This one gets me. 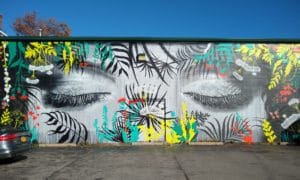 Some more shots from my travels around the city.  Buffalo is literally becoming covered with art! 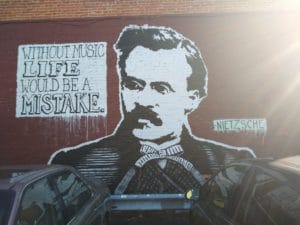 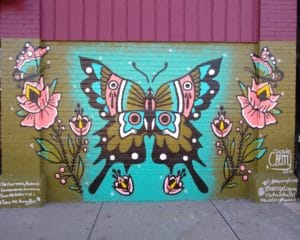 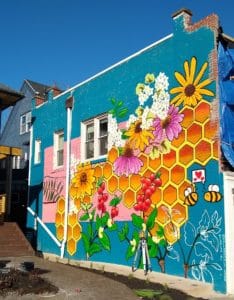 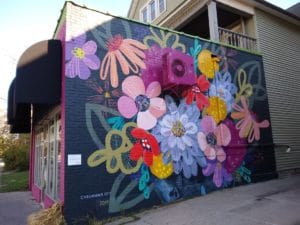 I hope you’ve enjoyed this little trip through the Allentown, the West Side and Elmwood Village murals!  In case you missed it, check out Part 1 of the Buffalo Street Art series.  Next up – Hertel Ave.  See you then!

*I happened to be in Allentown today (October 29, 2019) and I am sad to say that  the last of A Tribute to Tony Goldman, Iron Fireman and Chino had deteriorated quite a bit in the past couple of years, as you can see from the photos above.  All have now been painted over.  As I’ve said before in these posts, street art is only temporarily permanent. Although we’re sad to see a mural go, it’s the nature of the beast, and these were deteriorating badly.  I’ll be watching to see what happens next, and will let you know if I see anything interesting!  Photos below.