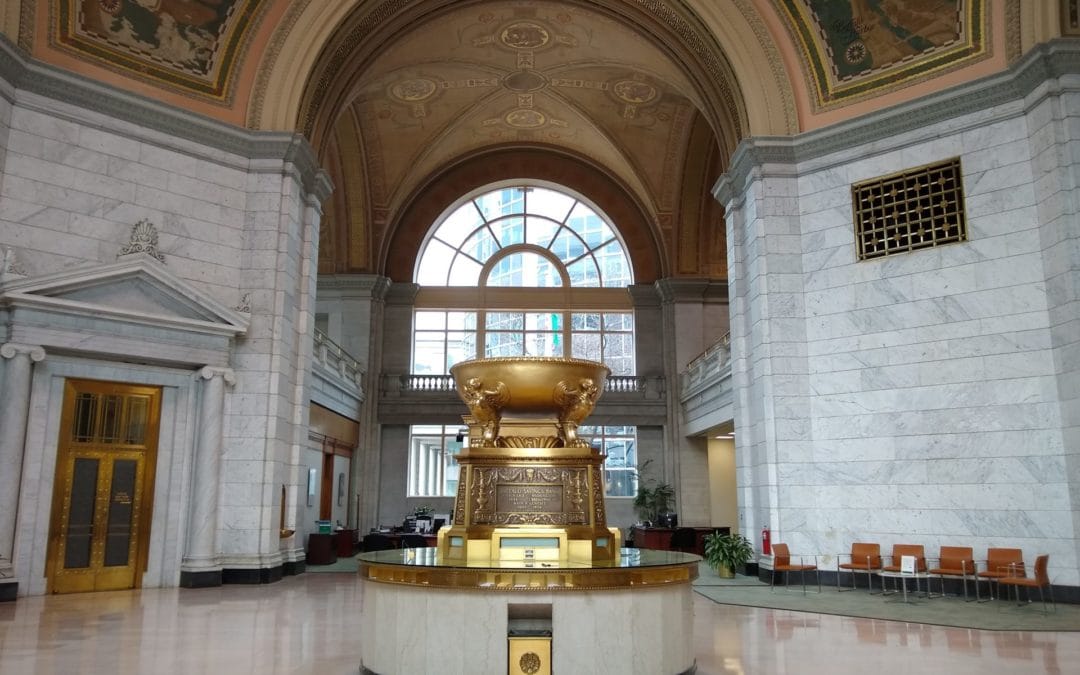 When I think of the Goldome Building in downtown Buffalo, my first thoughts should be great Buffalo architecture. But instinctively I think of Instagram.  Seriously – this is where we are as a culture. It is probably the most Instagrammed building in the city.  I guess it’s easy to see why. This building looks amazing in photos, and that my friends, is what Instagram is all about.

But my next thoughts go to Buffalo Savings Bank, and then immediately to M&T Bank.

Buffalo Savings Bank was opened in Buffalo in 1846, with Millard Fillmore as one of it’s founders. It was the first savings bank in the city. It was billed as the bank for the common working man. You see, in the mid-nineteenth century, banking was reserved for the wealthy and Buffalo had plenty of wealthy people at the time. But for every wealthy person in Buffalo, there were many, many more people who worked for the wealthy.

Buffalo Savings Bank was opened in order to give the regular folk a safe place to keep their money. You know, safer than under their mattresses. It also gave people aspirations that they could save their money to build a better life for themselves. And we all want that, don’t we?

Customers of the bank were to be ‘tradesmen, clerks, mechanics, laborers, minors, servants and others’ according to their charter. The ‘common man’ flocked to Buffalo Savings to make their deposits, to give them piece of mind that their hard earned dollars were safe, and to give them hope for a better future.

The bank’s first home was at Washington and Broadway. Unfortunately, that building burned in 1865. They used a temporary site until 1899, when the bank held a design competition for a new building. Well known Buffalo architects E.B. Green and William Wicks won the competition, thus creating another one of their masterpieces. This one happens to be a beautiful example of neoclassical beaux-arts style. When it was built, it contained more stone than any other building in the country. Each pillar took three months to build! Architecturally, it’s perfect in my book. The design showcases the security, aspiration and stability that people expect from a bank.

Let’s talk about the dome for a minute. It’s covered with 13,500 separate pieces of terra cotta, each row a different size and shape from all the others. It seriously must have been a complicated process to complete. Originally covered in copper, it turned the greenish color we all know and associate with copper. It wasn’t until 1953 that 24 karat gold leaf was painstakingly applied, finally creating the iconic Buffalo building we all know and love today. The dome received two more fresh coats of gold in 1979 and 1998 respectively. It is gorgeous!

The inside is just as impressive as the outside. The murals were added in 1926, and were done by Frances, Davidson & Savage Painting Company. And they are stunning. There are four sides to the murals, surrounding the dome itself, and each side is represented by Commerce, the Arts, Power and Industry respectively, highlighting all that was going on in Buffalo at the turn of the last century.

At the center of the dome is a quote from Confucius which states, “Virtue is the root, and wealth is the flower.” I find that to be very fitting for a bank. It instills trust.

As a side note, showcasing Commerce, the Arts, Industry and Power in architecture here in Buffalo seems to be a theme. The intricately designed floor of the Ellicott Square Building mentions them. Similarly, Old County Hall uses Agriculture, the Mechanical Arts, Justice and Commerce. Interesting trend.

Buffalo Savings Bank flourished through the 1950’s and 60’s. However, in the 1970’s, the very beginning of the savings and loan crisis caused the bank to falter.

The name of the bank was changed to Goldome in the early 1980’s. However, the new name did little to help their fiscal situation and Goldome was dissolved by the FDIC in 1991. The bank’s assets were split between by Key Bank and First Empire Bank (of which M&T Bank was a major subsidiary). M&T purchased the buildings later that same year, and the Goldome Building was renamed the M&T Center, and now serves as a bank branch for M&T.

Of course, most Buffalonians still refer to it as the Goldome Building. I know this Buffalonian does.

New Owners of the Goldome Building

So, who was this new steward of one of Buffalo’s most well known architectural treasures? In order to figure that out, let’s go back to the beginning.

As I discussed in The Fidelity Trust Building post, M&T is the only bank that was started in Buffalo that is still present here today. It was established in 1856 by Pascal Pratt and Bronson Rumsey, who were two very prominent Buffalonians. While on a train returning to Buffalo from New York City, Pratt and Rumsey discussed the lack of good banking options in Buffalo. So, they decided to start their own bank. It was to become what is now M&T Bank. That blows my mind. Two people can have a conversation about starting a bank, and then they do. I mean, who does that?

For curiosity sake, let’s take a quick look at these two men.

Pascal Paoli Pratt was a partner in the Saddlery Hardware store, Pratt & Company, which was begun by his brother Samuel. Pascal was the first vice president of M&T, was named president in 1885, and he also served on several boards of other banks and businesses. In addition, he was one of the originators of the Buffalo Park System, serving as the first president of the parks commission from 1869-1879. Busy guy.

Bronson Case Rumsey and his brother Dexter ran their father’s tanning (leather) business in Buffalo, until it was bought by the United States Leather Company. They invested the profit from the sale, which was roughly $20 million, in railroads, real estate and banking, most of it here in Buffalo. Between them, the two owned 22 of the 43 square miles that Buffalo was at the time.

Pratt and Rumsey were interesting men to say the least. But that’s enough history for today.

In Buffalo we are so used to the incredible architecture, that sometimes we forget to look. We get so busy in our everyday lives, that we forget to notice the beauty that surrounds us.

The Goldome Building is a veritable treat for the eyes. When I come upon this Buffalo architectural icon, I feel grateful. I’ve said this before, and I’ll say it again. I’m grateful that this building still stands as a testament to all it represents. The gilded age of Buffalo, the vision Buffalo possessed at the turn of the 20th Century, the changes our city has undergone since then.  And finally, that our city is home to intelligent and determined people who work to preserve beautiful buildings like the Goldome Building.

Take the time to notice your city. Wherever you live. Look, and you will find the beauty.