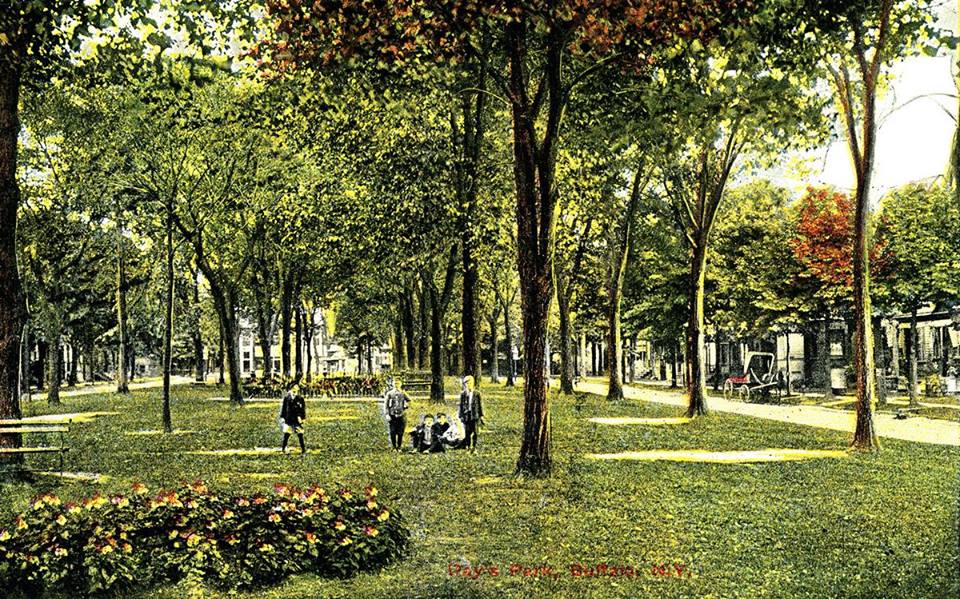 Buffalo is fortunate enough to have three residential parks within its boundaries.  They are Day’s Park, Arlington Park and Johnson Park. This post is the first of my three part series on these parks.

I’m going to begin with Day’s Park, simply because it’s the first one I experienced.  My husband and I volunteer at Friends of the Night People, and on our way there one Sunday afternoon, years ago, I happened to catch a glimpse of the park while driving by.  My husband is a patient man and he pulled over so we could go explore. I remember thinking to myself, this must be a great place to live! 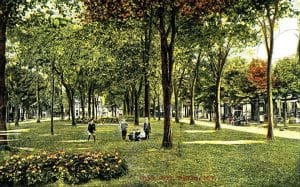 The park is named for Thomas Day.  Although designed by Frederick Law Olmsted, Day’s Park was not originally part of Olmsted’s plan for Buffalo’s Park System.  In 1886 (well into the building of our park system) the responsibility of the Board of Park Commissioners was expanded to include all public green spaces in the city. The Board requested from Olmsted designs for several new small areas, one of which was Day’s Park. He submitted plans for all of them.   So, Day’s Park is an Olmsted design.   Cool.

But let’s go back to the beginning.

After the burning of Buffalo in 1813, and after several more fires leveled numerous homes in the city, Buffalo’s fire code was changed (sometime around 1820-21) to stipulate that residences could no longer be built entirely of wood.

Thomas Day arrived on the scene in Buffalo in early 1823, and if you think about it, his timing couldn’t have been more perfect.  It was just after the fire code changed, and just before the opening of the Erie Canal and all the incredible growth Buffalo underwent immediately following.

Thomas  Day, you see, was a brick maker.  When he arrived, he opened Buffalo’s first brick kiln.  The need for brick was there, and so was the money.   Day of course, made a small fortune.  Smart man. 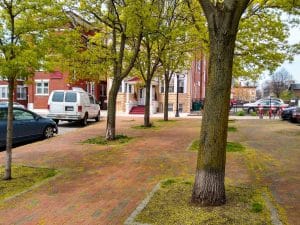 Like many who possess an entrepreneurial mind, Day’s next step was to invest in real estate.  He used his brick money to invest in land just north of the city. He anticipated that the city’s growth would move northward as the city became more and more industrialized.  He was right. That’s exactly what happened. Smart move.

Lewis Allen had a farm adjacent to Day’s land just north of the city, and when his herd of cattle grew too large for his own acreage, he used Day’s pasture.  He did this by driving his herd west from what is now Main Street. The well trod path to Day’s pasturage became what is now Allen Street, in Allentown. Named for, of course, Lewis Allen.

In 1859 Day donated the green space where Allen’s cattle pastured, to the city as perpetual green space, Day’s Park. Yet another smart move.

He then built the first two homes on the space for his sons.  They are Nos. 25 & 33. They were built with Day’s own bricks and both homes are still standing today. 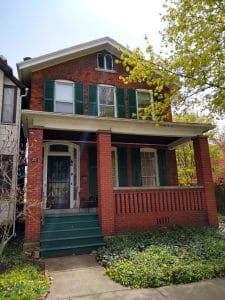 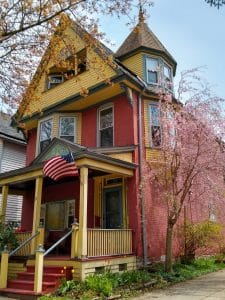 Interestingly, Olmsted included a fountain in the Days Park plan.  In the entire park system he created for Buffalo, this was the only fountain included in any of his plans.  Regrettably, the original fountain was removed in 1923.   Fountains can be difficult and expensive to maintain over time, so one can only assume this was the reason for the removal.

The park itself was enjoyed and beloved for many years.  Unfortunately though, it fell on hard times in the mid twentieth century,  much like Buffalo itself. Sadly, homeowners moved out and rented the properties. Care of the previously well used and well loved park fell off, and so did the care of the homes adjacent to the park.  The park deteriorated and the homes became dilapidated.

In 1957, the city announced plans to split the park into a playground and a parking lot. Warren Day Ferris, a descendant of Thomas Day, produced an original deed which stated the land was donated with the stipulation that the land be kept a park, or it would revert to Day’s heirs.  When the city balked, Ferris sued. The case was taken to the State Supreme Court, which ruled the space had to remain as one space, and as a park.

In the 1970’s, a college student, David Urgo convinced a farmer to donate 60 wild oak, maple and ash trees and the parks department arranged for planting.  These replaced the elm trees that were lost to Dutch Elm Disease in the 1960’s. (Buffalo lost hundreds of Elms at that time.) 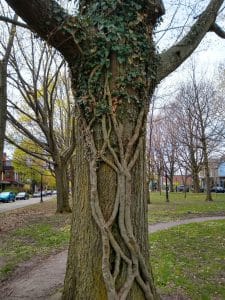 The hard times however, continued for the park, as they did for the city.  At one point there were drug deals going on in broad daylight right out in front of the school that resides on the park (now Elmwood Village Charter School). Police intervention was slow at best. 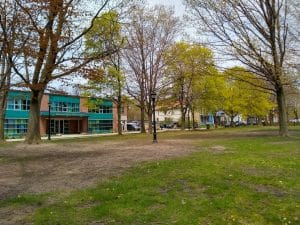 In 1987, the Day’s Park Block Club was formed.  At this point more than half of the homes (both one- and two-family) were either owned by absentee landlords or stood vacant.   Just 30 trees remained. The Block Club began extensive renovation of the park.

They pushed the city to deal with the drug problem, and also assisted the city in prosecuting the absentee landlord situation, getting the owners to either sell, or make the necessary improvements to their homes on the park.

The movement was under way.  The fountain was replaced in its original spot in the park surrounded by a wrought iron fence, as Olmsted had designed it.  But almost unbelievably, the fountain was stolen in 1995 by thieves posing as city workers.   It wasn’t until 1999 that funds were made available to replace it.   With the fountain in place once again, the park looks much as it did on Olmsted’s original design.

When I visited Days Park again recently to snap a few photos for this post, I couldn’t help but notice the ongoing problem the Block Club has been experiencing with getting grass to grow in the park.  The trees shade the park so much that it’s difficult for grass to grow. They’ve held fundraisers specifically for this project.   It is ongoing. The fountain appears to need work as well, although this might be what it looks like every spring after a long hard Buffalo winter!    Mental note to check it out in a month or so”¦ 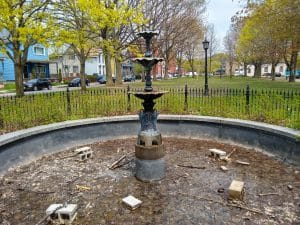 I hesitated to even include this photo in the post, but when I check back, I’ll hopefully get a great shot of a beautiful working fountain. I’ll keep you posted.

Update:   A recent visit to Day’s Park shows the park in full bloom of summer.   I am happy to report that the fountain is up and running and looking great, surrounded by a plethora of wildflowers about to burst open!   A couple of other shots show the struggle with the grass continues, but you can also see the widespread shade provided by the trees, causing some of the problem.   Still, the park is a peaceful oasis, and I found myself wishing I had brought a chair and a good book. 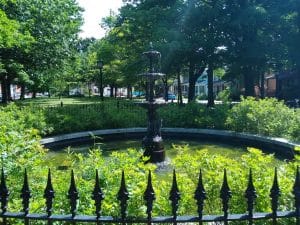 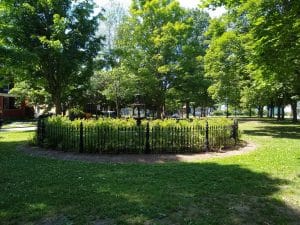 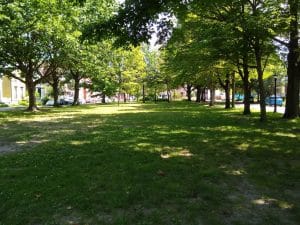 You could say that the story of the park parallels the history of Buffalo.  Both built during great prosperity, both fell on hard times, and suffered struggles along the way.  But both are emerging victorious through hard work and perseverance. 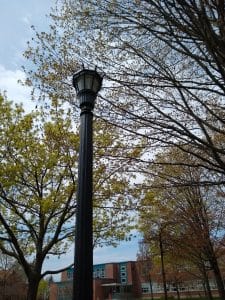 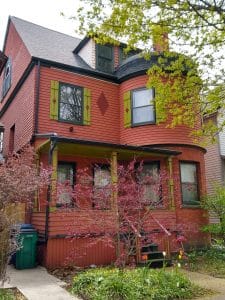 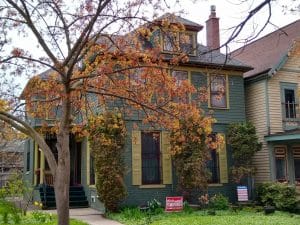 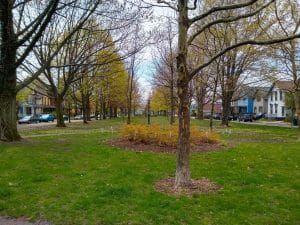 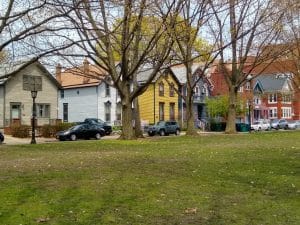 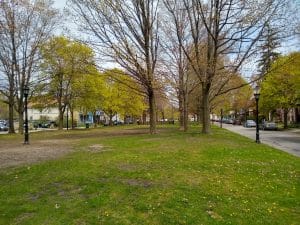 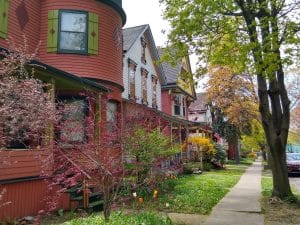 Day’s Park is located just west of Allen Street at Wadsworth in Allentown, on a piece of property that used to be an open pasture.  Can you imagine it?   I can.   But you know what a daydreamer I can be.

Incidentally, residential parks are perfect for urban hiking.  Next time you find yourself yearning for a little urban exploration, get yourself to Day’s Park. Explore it and the surrounding neighborhood reminding yourself of the history this park has seen.  From farmland to numerous homes, a school, and a park. It all used to be pasture land owned by a brick maker, Thomas Day.   A smart man, who made several smart moves in his lifetime. One of which we benefit from still, our own Day’s Park.

Look for my second and third posts on Buffalo’s residential parks over the next two weeks.