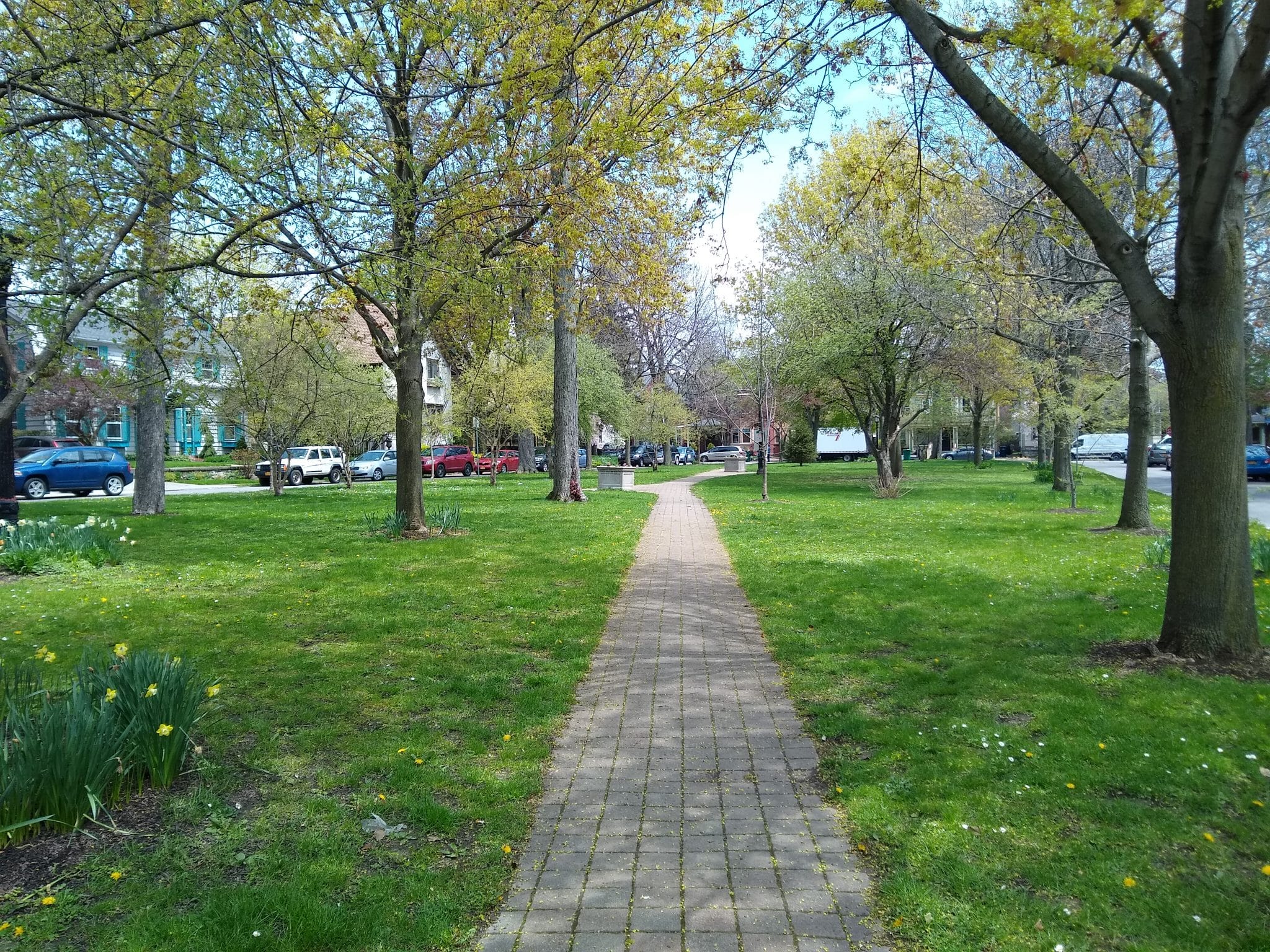 Several years ago now, I heard a story about a particular house in Arlington Park.  The person telling it spoke about the architectural detail, the unique building process and the care that has been taken to keep the structure original. I had no idea where Arlington Park was. Of course I asked a few questions and the next chance I had, I took off to explore. Here’s a photo of that house.  To my eye, it’s enchanting. And it sparked a real interest in residential parks. 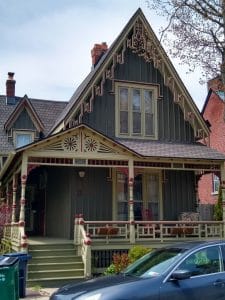 In the beginning (1856), Arlington Park was designed and laid out as a private park on the estate of James Wadsworth.  The estate was accessed from North Street and extended to Allen, bordering on Wadsworth Street. Private parks were quite common among the rich in Buffalo at the time.  For us, that’s hard to imagine today, even among the rich.

Wadsworth was wealthy to be sure.  He was from Durham, Connecticut, and was a Yale graduate who settled in Buffalo in 1845, to open a law practice.  By 1850 he was chosen as the city’s attorney, and by 1851 he was elected Mayor of Buffalo. He served one term, which was one year at the time.  He was then named president of Buffalo, Brantford and Goderich Railroad after his mayoral term ended, and also served as a New York State Senator from 1856-58.

Basically, you could say he was successful enough to have a private park on his estate.  Wadsworth left Buffalo for New York City in 1859.

The city grew up around the park and through pedestrian use, the park was eventually ruled to be part of public domain in 1884. 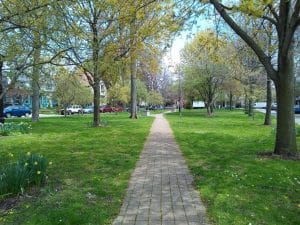 Frederick Law Olmsted lived on Arlington Park while he was working in Buffalo designing our Park System.  He actually designed the green space in the park, going off of his own notion of what a common city space should be. After experiencing the park, I have to agree with that notion. It is everything a residential park should be! Trees, shrubs, flowers, meandering walkways, pretty light posts.  Enough space to throw a frisbee around or have a picnic, but not enough space for a baseball diamond. You get the idea. 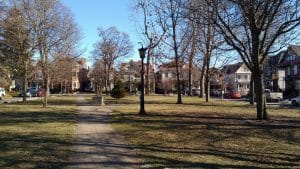 Arlington Park is in Allentown just one block off of the busiest end of Allen Street.  It’s a small 300’ x 100’ plot of land. But standing in the center of the park, you would never believe the shenanigans that go on one block over.  The park is such a haven. It’s quiet (it really is!), it’s picturesque, and the homes. They are nothing short of spectacular! 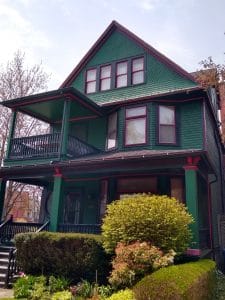 The story goes that because Olmsted lived here, architects were attracted to building here, and they all tried to outdo each other.  Whether it’s true or not, we’ll never know. But you have to admit, it must have been a rare opportunity to be able to build on a park designed by Frederick Law Olmsted, the greatest landscape architect our country has ever seen. What we do know for sure is, the homes that were built here make living on Arlington Park quite a charming prospect. 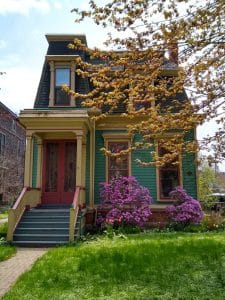 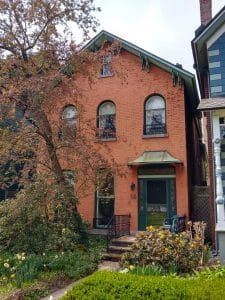 They are all different styles and sizes.  Some are apartments, some are single family homes.  They are all well maintained. They are very close together.  Some people think this lends itself to the sense of community here.  My husband and I have always joked that the reason we have great parties is because our house is small and people are forced to mingle.  There’s something to be said for that.

Same thing applies to this type of city living.  There is a sense of community when you know your neighbors.  Some neighborhoods have it. Arlington Park definitely does. I’ve wandered through many times, and each time, I get into friendly little conversations with residents and visitors alike.  This is truly what a community should be. 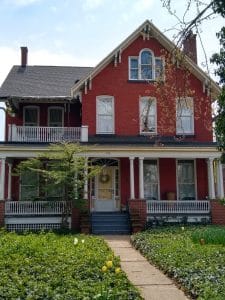 There also appears to be an active block club in Arlington Park who keeps the residents in touch, the park in good shape, the flowers planted etc. The overall effect of all of it is serene, appealing and friendly.

If you think about it, Arlington Park is actually a microcosm of what Buffalo truly is.  A warm, welcoming, friendly place to live. 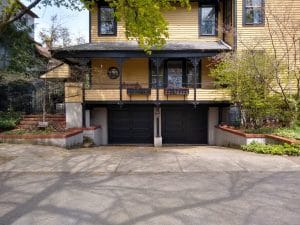 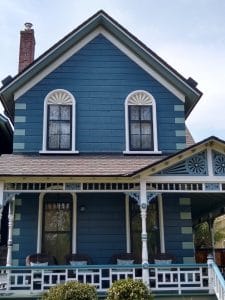 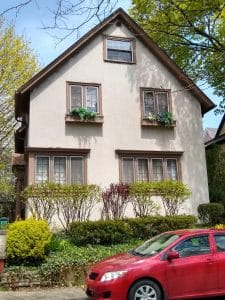 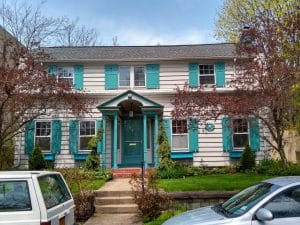 As I mentioned in part one of this series, residential parks are a great place to do a bit of urban exploration. Arlington Park is no exception. Take some time this spring and summer to get out and experience it and the surrounding neighborhood.  Fair warning, you may find yourself getting into some great conversations with the locals. Enjoy it! 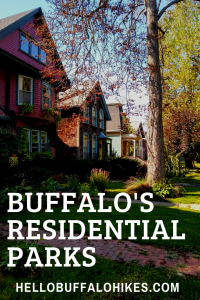 Missed the first of three posts about our residential parks? Read about Day’s Park here.

Look for my third and final post about Buffalo’s residential parks next week.   It’s going to be a good one!