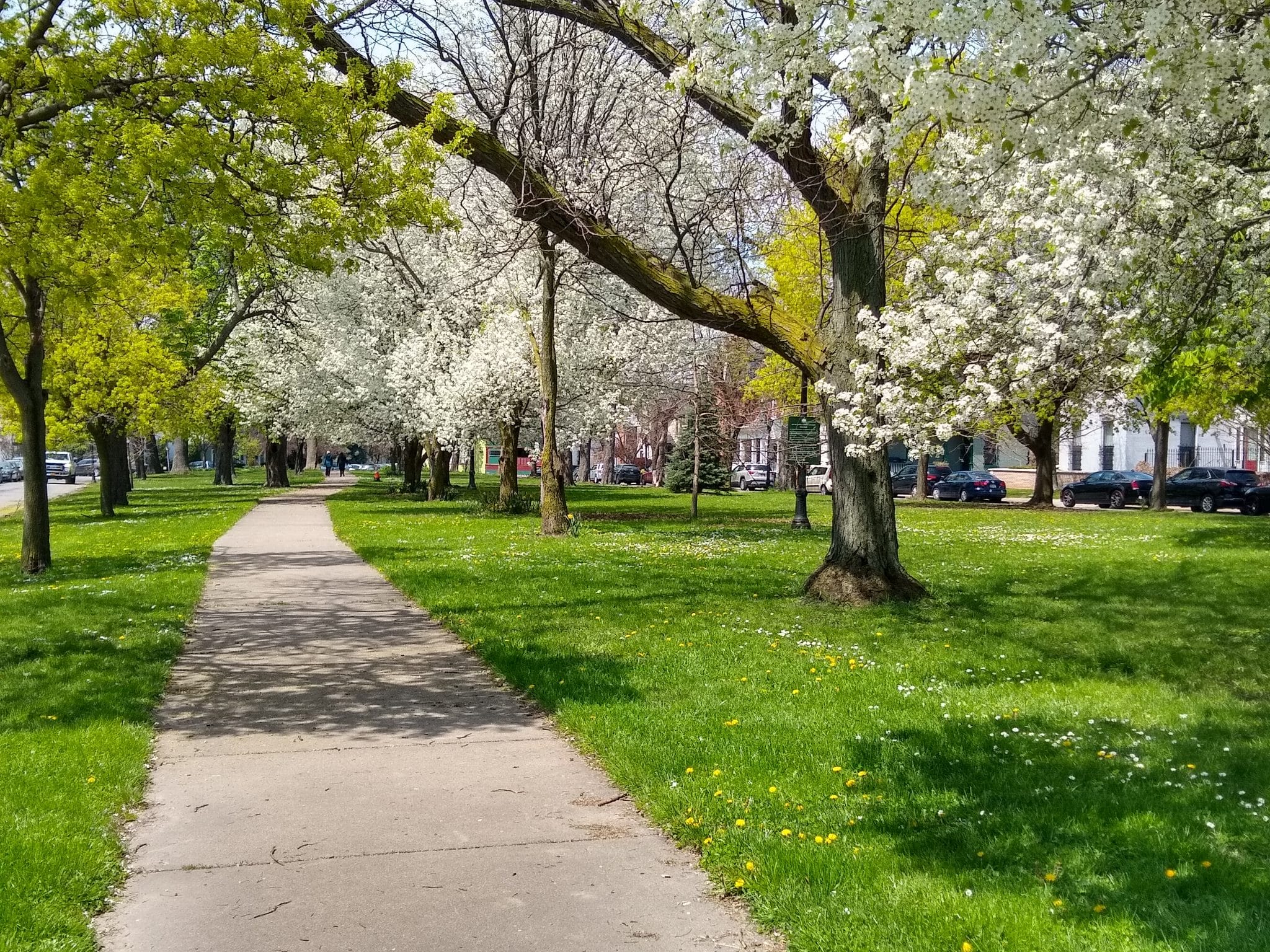 This is the last in my three part series about Buffalo’s Residential Parks.  Click the links if you are interested reading about part one, Day’s Park, and part two, Arlington Park.

It is named for Ebenezer Johnson.  So who is he, and why is this park named for him? 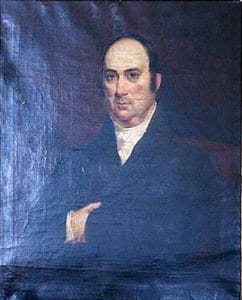 Ebenezer Johnson was from Connecticut. He studied as a physician in Cherry Valley, New York, where he met and married his first wife, Sally.  He came here in 1810 and opened his medical practice in what was just a glimmer of what he himself would witness Buffalo become during his time here.  During the War of 1812 he accepted a position as an assistant surgeon with the volunteers of New York State.

After the war, he returned to Buffalo and opened a drug store as well as resuming his medical practice.  After 1823 he became very active in business and eventually became well known for construction, real estate, trade and banking.  No small feat. He became quite successful and next turned to politics.   He held several posts and sat on many boards, and in 1832 when Buffalo was incorporated as a city he was elected by the common council as Buffalo’s first mayor.   Ah, that’s why the park is named for him! That, and the following…

That same year Johnson broke ground on a grand home located on a large piece of property he owned on Delaware Avenue between Chippewa and West Tupper.  It was completed in 1834. The home was referred to as “the Cottage” and was considered the most palatial home in Buffalo to date. On the property itself there was a man made lake, fruit orchards, a large vegetable garden and flower gardens.  The 25 acre property and “Cottage” was a well known spot for socializing among the elite in Buffalo. 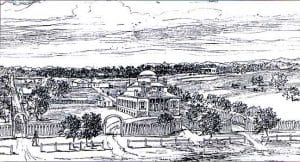 Johnson served a second term as Mayor of Buffalo in 1834-35, after having turned down the nomination in 1833. Mayoral terms at the time were one year.

Sadly his wife passed away in 1834.  He remarried a year later to Lucy Lord.  Johnson continued to be an influential member of Buffalo society until selling his estate and leaving the city sometime around 1847, when he moved to Tellico Plains, Tennessee, where he owned an iron ore mine with his brother.  He passed away there in 1849.

During the 1850’s Johnson’s property was divided up into one of the most elegant residential sections of the city at the time.    The lake became part of Rumsey Park on the estate of Bronson and Evelyn Hall Rumsey. The Cottage was re-purposed as The Female Academy, the most elite, all girls school in the city.  Incidentally, it was the first institute of higher learning for women in the country. (!) The Female Academy still exists today as Buffalo Seminary, now located on Bidwell Parkway. 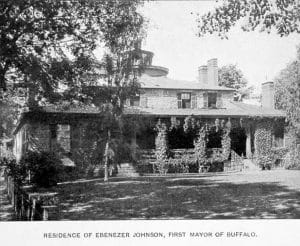 The “Cottage” Photo credit to “History of the City of Buffalo and Niagara Falls.” Published by The Times, 1896.

An 1876 map of city parkland indicates that Frederick Law Olmsted redesigned the green space in the center of Johnson Park and incorporated it into his overall design of our Park System.  And it shows. You only have to walk through the park to feel Olmsted’s presence here. The flow of the park is just lovely. No other way to describe it. 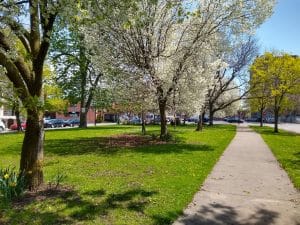 Many of the homes on Johnson Park that were built in the 1850’s still exist, and many have been recently restored to their former glory.  They are close together, fostering that “neighborly, friendly” feel we discussed in the second part of this series. And like the other residential parks as well, Johnson Park is a great place to walk and to meet and talk to fellow Buffalonians, whether you live there or not.  The people here are indeed friendly, and more than willing to discuss what they know of the park and the homes lining it. 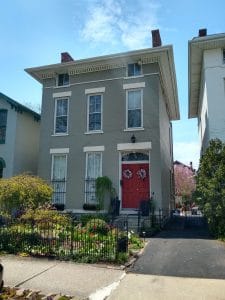 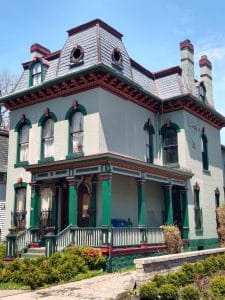 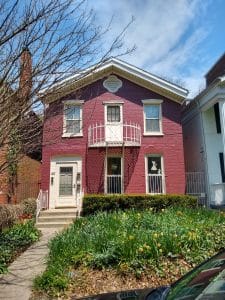 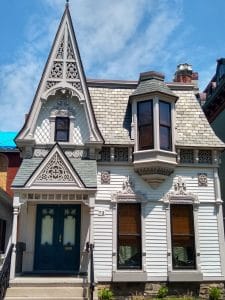 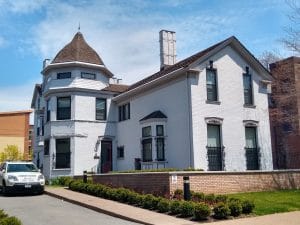 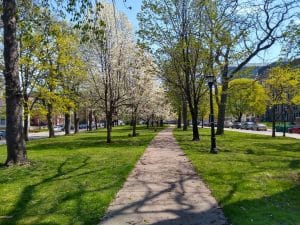 Johnson Park has suffered through the socio-economic troubles that have touched our city, and indeed our whole country.  Thankfully, Johnson Park and the city of Buffalo both have committed residents willing to stay the course. And like the city itself, the results in Johnson Park are showing.  This is due in great part to the commitment of the Johnson Park Association and the Cary Street Association, both of whom lead the way in ensuring that both Johnson Park and the West Village Historic District will remain as an integral, thriving neighborhood in Buffalo for a long time to come. 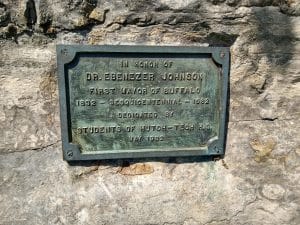 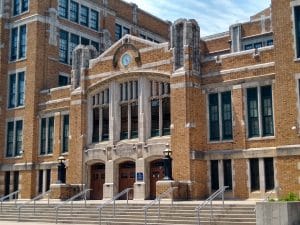 I get a feeling in this park.  It’s a nostalgic feeling of days gone by.  At the same time I feel a sense of future here, like the residents have a clear vision of what they hope for the neighborhood.  It makes me want to stay. Live here. Experience city living at its absolute best. That, is Johnson Park.

Go see it, you will be enchanted! 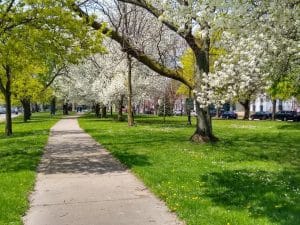 I hope you enjoyed my series about Buffalo’s Residential Parks.

Click the links if you are interested in reading part one, Day’s Park, or part two, Arlington Park. 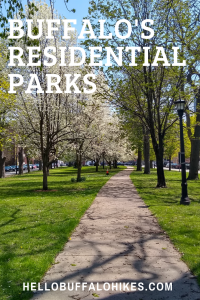 Where in the city would be your first choice to live?  Money is no object…comment below!