Cazenovia Park in the Fall 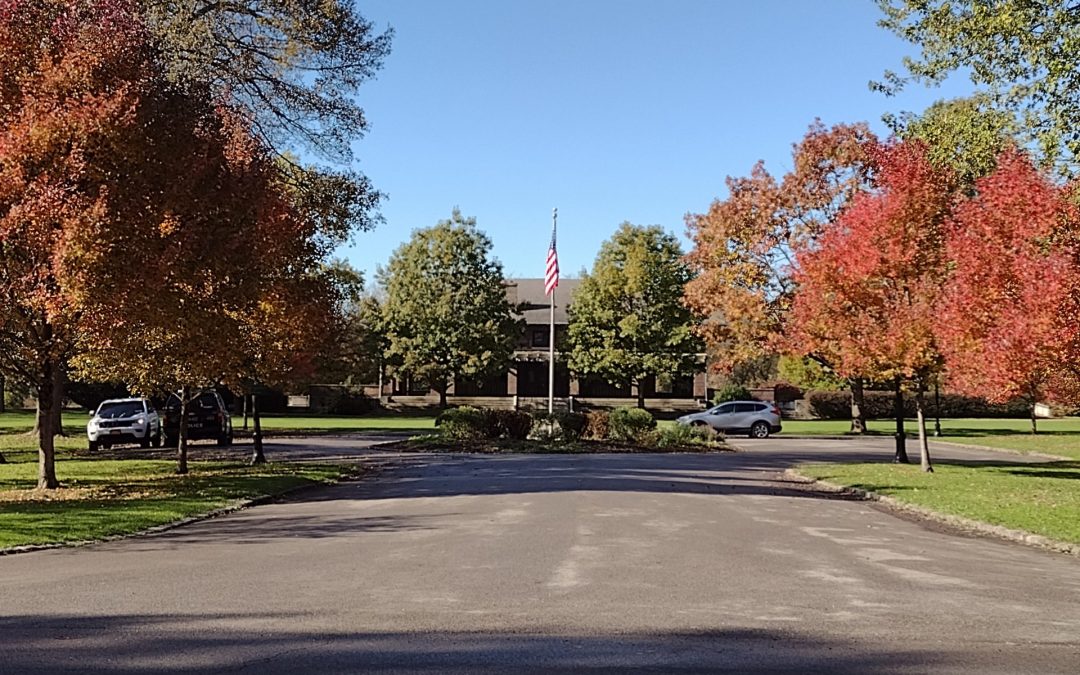 If you are a regular reader of the blog, you know that my husband Tim and I are both bikers, as in cyclists. In the summer, we ride four or five days a week. We have ridden through Cazenovia (Caz) Park several times. The last time, Tim suggested I write about it. I said what I always say, “I’ll put it on the list.” And I did. Full disclosure, my list is now pages long with something like 80 ideas waiting to be written.

A couple of weeks ago, I heard it was peak time to see fall colors in Buffalo. So I struck out for Caz Park to see what I could see. I admit, I am not very familiar with the park except for those bike rides through it on Warren Spahn Way, and a couple of road (running) races. But this day I drove over and parked at the Shelter House to get a closer look. I see things more clearly on foot.

A Bit of History, of Course

Let’s start with a bit of the history of Buffalo’s Parks and Parkway System.

In the mid 1800s, Buffalo was booming. We were growing as fast as a city could at the time. Commerce flourished along the waterfront with shipping, railroads, cattle, grain and all the smaller industries that supported these giants. Buffalo had money, and by 1860, city leaders wanted to create a park similar to Frederick Law Olmsted’s Central Park in New York City. So, they brought Olmsted to Buffalo to design our own Central Park.

After touring the city through its radial streets design, laid out by Joseph Ellicott in 1804, Olmsted declared Buffalo to be “the best planned city, as to streets, public places, and grounds, in the United States, if not in the world.”* He then proceeded to improve upon it, by proposing and creating a park system to compliment the already beautifully designed city we call home. It would become the first park system in the United States, where the parks are connected through a series of parkways, giving the illusion that, when travelling from one to another, you haven’t left the park.

Take a walk down the center of Lincoln, Bidwell or Chapin Parkways to get that feeling. It’s real. Olmsted knew what he was doing. He is perhaps the greatest landscape architect our country has ever seen, even now.

Cazenovia Park and South Park were designed to serve the rapidly growing neighborhood that came to be known as South Buffalo. You know the place. These parks were to become part of the elaborate park system I mentioned just a moment ago.

Caz Park was built between 1892 and 1894, by Olmsted, Olmsted & Eliot, including Frederick Law’s son, John. It sits on an 83 acre site roughly bounded by Abbott Road, Cazenovia Street, Potters Road and Seneca Street. Cazenovia Creek ran through the park, and was dammed to create a 20 acre lake near the Cazenovia Street/Abbott Road area. This was news to me. And it made me think. It’s an 83 acre park, so that means the lake took up just about a quarter of the whole park.

Wish I could have seen it. Apparently it was a popular spot for canoeing and boating in summers as well as ice skating in the winter. Which I could totally see. I get that it’s a safety thing, but I wish skating was allowed in the parks again. I suppose we have skating at Rotary Rink and Canalside. Which is fun, but it doesn’t seem quite the same as gliding out onto a lake, or even a creek.

What would we have to do to bring this back? Hmmmm. Not holding my breath.

In 1902, the Shelter House was built to accommodate the boaters and skaters. And for that matter the picnickers too, because this was becoming the place to be evenings and weekends in South Buffalo. The Shelter House was smaller than Olmsted had originally designed it, but where else do you see public restrooms like these, except in an Olmsted park? They’re amazing.

In 1912, funds were available, and the Casino was built. The architectural firm of Esenwein & Johnson was chosen to design it. The firm was well known, and quite popular in Buffalo, having designed many buildings and homes here, including the Temple of Music at the Pan Am Exposition, the Niagara Mohawk Building, the Elephant House at the Buffalo Zoo, the Calumet Building, and more.

The casino was located right along the lake and the lower (basement) level had room for 100 boats and canoes, both private and rentals. There were restrooms, an ice cream shop and a candy counter, with plenty of seating both inside and out on the expansive patios overlooking the lake. The upper floor was used for offices and storage. Must have been something back in the day when the lake was still there, sitting out on the patio sipping a cool lemonade on a hot summer day, watching the boaters. Or hot cocoa in the winter after skating.

The casino is still there, and the views are absolutely lovely today of a meadow with plenty of trees, a playground for kids, baseball diamonds and the creek off in the distance.

What Happened to the Lake?

Because the lake was created by damming the creek, there were all sorts of drainage issues throughout its history. Silt built up often in the (only) 4 -6 feet deep lake, and flooding occurred many times. Over the years, the lake was dredged and redesigned in the hopes that the flooding issue would be rectified, but it was no good.

The lake was eventually removed. I’ll add that I’ve read many different versions of when it was finally removed. I guess there was a small lagoon area that was created during one of the redesigns that was there until 1969 or so, but most of the lake was gone in the 1950s. I won’t quibble about the exact date, because it’s pretty clear that it was completely gone by 1970. It’s sad that they couldn’t make it work, but you can’t fight Mother Nature. She always wins in the end.

On a Personal Note

My Dad recently told me a story about asking his father to drive him out to Caz Park to do some fishing. He was about 12 years old and had heard the fish were biting. He asked to be dropped off and then picked up three hours later. Normally, he’d have ridden his bike, but it was March and was snowy. My father grew up on the East Side, and rode his bike all over Western New York as a 10 or 12 year old, to fish. Including to a lake out in Clarence. And once he rode to Chautauqua Lake without telling his parents where he was going. But that’s another story for another day.

So my Gramps dropped Dad off at Caz Creek in the park. He was absolutely freezing by the time he got picked up, three hours later. Apparently, the casino was closed that day. When I asked if he caught anything, he replied, “Oh yeah, we ate fish for supper that night, but I don’t remember what kind or how many, I just remember how cold I was.” This was a kid who delivered 120 newspapers every morning, and more on the weekends, so he was no stranger to being out in the cold. But that memory sticks out in his mind about Cazenovia Creek to this day.

Today, the park is chock full of amenities. There are baseball diamonds, tennis courts, basketball courts, soccer fields, a playground, a splash pad, a community center, complete with a swimming pool, an indoor ice rink, and a senior center. Oh, and a golf course! There is also a neighborhood library on the grounds, although it’s temporarily closed. And let us not forget the numerous events that would be taking place throughout the year, if it weren’t for covid. (When will I get to write a post that doesn’t include that word?)

And the foot paths. They are used daily by South Buffalonians of all ages. There are always people walking here. With their dogs. Alone. In pairs or small groups. And why not? It’s a beautiful park, with gorgeous, old trees chosen and placed, quite possibly by Olmsted himself. And It’s what I did on this crisp, sunny day at the end of November.

The Shelter House was renamed in 2016 for Robert B. Williams, a former professional baseball player, and longtime Buffalo cop. He also coached and mentored thousands of children while active in the Buffalo Police Athletic League. Very cool.

I am so happy I ‘got to know’ Caz Park. And there is more to see! I’m going to make it a point to get out here in all four seasons to really get to know this park. The foot (bike) paths are just lovely, with lots to see, including wildlife. There are a lot of trees in the park, both old and new. That’s always a good thing. And some of the old ones, boy, are they ever beautiful.

Here’s something I couldn’t help but notice while walking around the park. The park is residential in several areas. Meaning that there are homes that face the park, on Potters Road, Cazenovia Street and more. And guess what? They’re not million dollar mansions like the homes that line Nottingham Terrace, or Rumsey Road. That hits me like a breath of fresh air. They’re great homes to be sure. I might have to return to get some photos on a street or two, and write a post…yes, I think I will. I’ll put it on the list. You know, that list that’s got 89 (I went back and counted) ideas on it, haha!

This park is steeped in history. While walking around, I couldn’t help but wonder about the many, many people who have come before me. What were they like? Did they freeze here in the winter like my Dad did? Did they score the winning goal at a soccer game, or basketball game? Or did their team win the softball championship in 1976?

Or was this the place to come on Sundays in your horse drawn carriage around the turn of the 20th century? With a picnic basket, filled with whatever was popular picnic fare back then? Possibly sitting out on the terrace overlooking the lake?

Who were these Buffalonians? What were they like? Were they happy? Were they kind?

When, oh when, will time travel be a thing? I will be first in line. I’d like to see Buffalo during its heyday. I’d like to see this park in 1915. And not as a woman of Polish/Irish descent who would have worked in service, but as the daughter of very educated parents, who happened to be very successful, and wealthy. Haha!

This place incites daydreams in me. I will definitely be back. And soon. I love walking in the snow…