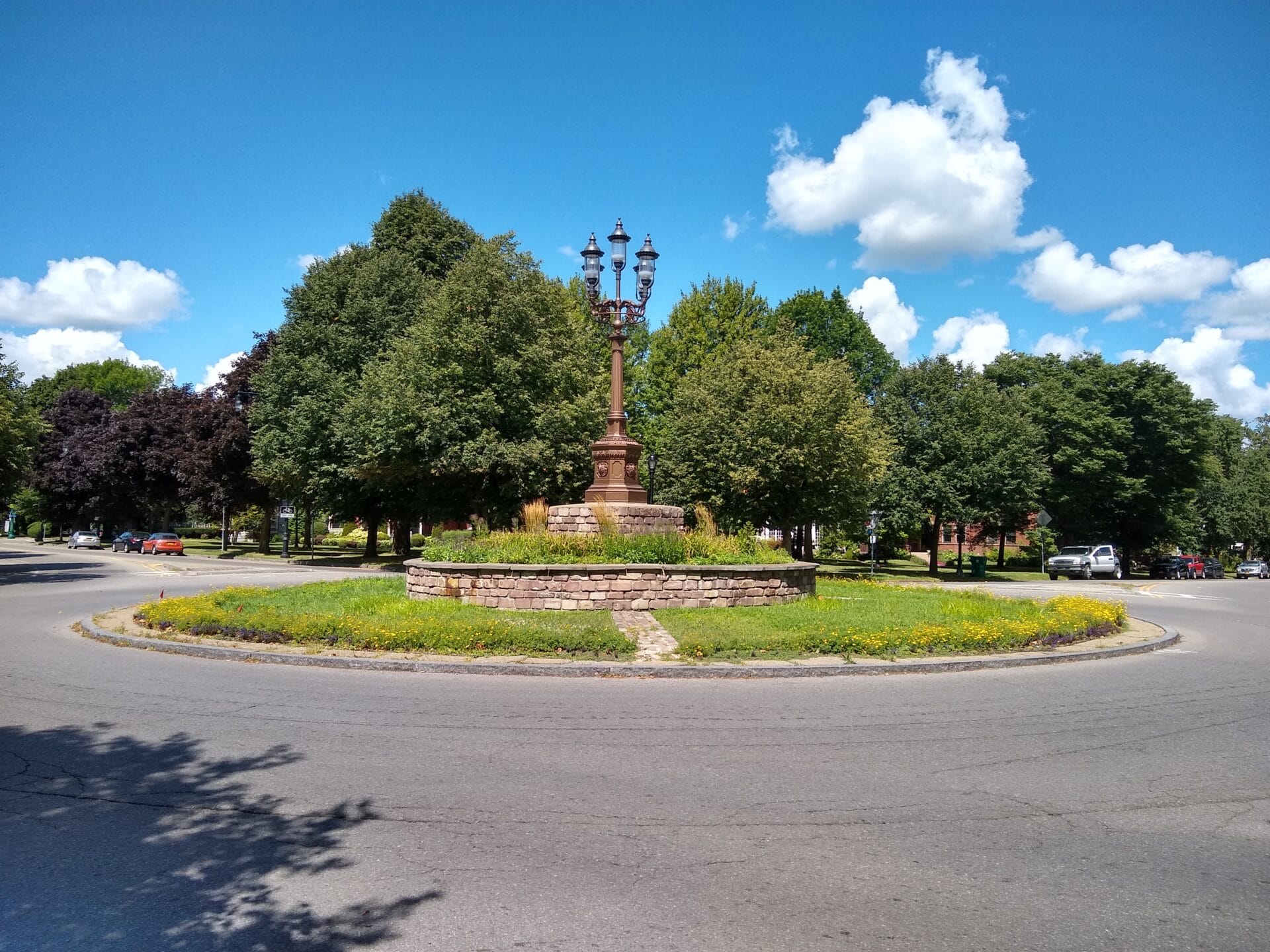 I’ve been wanting to write about Symphony Circle ever since I wrote about the Birge Mansion back in February. History swirls around this circle like a lake effect snowstorm. And you all know how I feel about history! (pssst…I love it!)

Symphony Circle was designed by Frederick Law Olmsted when he designed our Parks and Park System in the 1860s and 70s. Back then, it was simply called The Circle. The name was changed after Kleinhans Music Hall was built. But, we’ll get into that later. When it was completed in the early 1870s it was small, simple, and had a gorgeous light standard in the center. Take a look at the postcard photo below. Looks like something right out of The Music Man in River City, Iowa, say about 1912! This was Buffalo!

I’ve read that Buffalonians used Richmond Avenue to race their thoroughbred horses. In the winter, they raced their cutters (sleighs). The Circle served as the finish line in these races. Can you imagine doing that today?!

The Circle has changed over the years, and at one point it was removed altogether because it was thought to impede automobile traffic. I have to laugh at that because today circles are being put in all over the Western New York area with the hopes of moving traffic along more safely and smoothly. Anyway, it wasn’t returned to what we see today until 2002! That’s a long time! I am grateful that they did replace it though. Symphony Circle is such an iconic part of our city at this point.

And it’s busy too! On this walk on a random Tuesday morning, I had to wait several times to take photos. Nobody likes photos of Symphony Circle with cars driving through!

There are wide expanses of grass and trees between the buildings and the circle, with park benches to sit and relax. And indeed, it is park-like. While I was there that Tuesday the benches were getting used on all four grassy areas. There was a group of teenagers passing through and they stopped for a few minutes on one bench. On another, two men sat talking. On the third several friends met up on a walk and decided to sit and visit before going their separate ways. And just as I was leaving, two women sat down on the bench in front of the Birge Mansion after what appeared to be a power walk. To me, this means the neighbors are comfortable here. I like that.

We’ll start at #1 Symphony Circle with the First Presbyterian Church. First Pres should be first. See what I did there?

Named First Presbyterian because it is Buffalo’s first religious congregation of any denomination (1812!). The congregation was originally downtown where the Main Place Mall now stands at the corner of Main and Church Streets.

When the downtown area became crowded with business and industry, many of the congregants moved north of the city core. Delia Austin Avery donated the land the church now stands on. The Austin family owned a good portion of the land surrounding The Circle. We’ll talk more about the Avery family later.

First Pres was designed by none other than E.B. Green. It’s Richardsonian Romanesque in style and was completed in 1897. He created this design to complement the state hospital (now the Richardson Olmsted Complex) at the other end of Richmond Avenue. There’s a reason everyone wanted Green to design their buildings. The man was a genius.

First Presbyterian is very active in both religious and social causes in the city. It’s a true beacon in the neighborhood, both architecturally and socially. It’s an amazing addition to Symphony Circle.

As I cross over Wadsworth I’m struck by how much I don’t dislike this building. I mean, it was originally a nursing home (Grace Manor) built in the early 1950s. Ellicott Development bought the facility in 2013. Gateway-Longview anchors the building utilizing the first two floors. The third and fourth floors are studio, one and two bedroom apartments.

It could use just a little sprucing up, but I like it. And the grounds are amazing!

As I cross North Street, the Birge Mansion slowly comes into view through the trees. What a great time I had touring this home (now offices) back in February. Built in 1897, it was modeled after a Georgian Revival style villa the Birges had seen in the Riviera. And is it ever gorgeous! My favorite part is the loggia and the terrace. Not sure what a loggia is? I wasn’t either. Head over to the post here to learn more about this amazing Buffalo treasure.

Thanks again for the tour Lori!

As I cross over Richmond, I immediately notice the porch on this house. How inviting.

This home is just lovely! Actually, I should say these two homes are lovely. Let me explain.

Brothers, Captain Thomas and Edward Maytham built these adjoining homes (one on Richmond Ave and one on Symphony Circle, in 1894. The homes were separated by double walls for privacy. The two owned a tug line and interestingly enough, the three river ferry steamers that ran between Unity Island and Fort Erie. Cool!

The homes are beautiful. I especially like the dormers, the ocular windows, and the tower with its unusual bell-shaped roof. In fact, the whole house is unusual. But there’s something about it that draws you in. You can’t help but like it.

Then there’s this. I absolutely love this one. It was designed by Franklin Caulkins, who also designed two more in this stretch. It’s an eclectic mix of styles, but it works! Check out that fence! Not sure it’s original, but wow!

See the home Caulkins designed for himself here.

This next one is perfect in every way. Colors. Details. Landscaping. All perfect. This Queen Anne was designed by Franklin Caulkins, designed for a Mrs. Frances Bennett in 1883. Look at all the details. The porches! This home is superb!

I could be very happy here. What do you think? Could you be comfortable in this home? I would love to see the inside of this house. It must be fantastic!

Actually, it is fantastic. Check out some interior photos at this link. Sometimes I love the internet.

And the Last of the Homes

And last but not least is this home. I’ve said it before about this type of home, it’s perfect for a big family. I hope there are at least four kids living here. It looks like a storybook house, one that I would have seen in my dreams as a child. It appears there’s some work being done on the porch. Even that goes along with my vision for this house. Big, old family homes are always in need of some repair or other.

Maybe not as grand as the one next door, but it’s got a certain charm that you can’t ignore.

As I wait for traffic to clear so I can cross Porter Ave, I look towards the circle and see this. Nice!

And finally, we come to Kleinhans Music Hall, home to the Buffalo Philharmonic Orchestra.

As I mentioned earlier, Delia Austin Avery donated the land used for the First Presbyterian Church. Her parents, Stephen and Lavinia Austin, heavily invested in real estate here in Buffalo. Her mother is credited with the purchase and renovation of the Universalist Church at 110 Franklin Street, converting it into a stylish office building. Coincidentally, both of the architectural firms of E.B. Green and Franklin Caulkins had their offices there.

After Trueman and Delia both passed away, their daughter, named for her maternal grandmother, Lavinia, no longer needed or wanted the mansion on The Circle. When she heard the city was looking for a place to build a music hall, she sold the home to them for half of what it was worth.

And we thank her for it!

Edward Kleinhans was one of the founders of the Kleinhans men’s clothing store located in the Brisbane Building. He met and married Mary Seaton, an accomplished pianist and singer. They moved to Buffalo in 1901. Having no children, when they passed away three months apart in 1934, they left their entire estate to the city to be used to erect a proper music hall, dedicated to the memory of Mary Seaton Kleinhans, and Edward’s mother, Mary Livington Kleinhans.

Kleinhans Music Hall was built between 1938 and 1940. Designed by the father and son architectural team Eliel and Eero Saarinen, in the International style. I’m sure it was considered very modern for its day. The unique design, which loosely resembles a stringed instrument, is lauded all over the world for its acoustic perfection. If you’ve ever been there, you know why. The sound in this building is perfection. In 1989, Kleinhans Music Hall was named a National Historic Landmark.

From its opening, Kleinhans has been home to the Buffalo Philharmonic Orchestra. The BPO was founded in 1935 and has been entertaining Buffalonians ever since. The Kleinhans stage has hosted such greats as Sergei Rachmaninoff, Aaron Copeland, and Yo-Yo Ma. The grammy-winning BPO has toured abroad on more than one occasion and has released more than 50 recordings.

If you haven’t gone to see the BPO perform, try to make it a priority. They do everything from Classical, Pops and Rock, to Kids and Youth concerts. They truly have something for everyone! JoAnn Faletta is the Music Director, and in a normal year would preside over 120 shows. During the shutdown, the BPO has been broadcasting archived concerts on WNED-FM, on Tuesday nights, as well as keeping the music going through their daily Facebook posts. As of this writing, the BPO is planning its re-opening for September 26. Like all of us, they will be back.

Of course, it’s because of Kleinhans Music Hall and the Buffalo Philharmonic Orchestra that The Circle was renamed in 1958 to Symphony Circle.

To me, Symphony Circle is one of those places that is steeped in history. When I’m there I try to imagine the horse races and cutter races. Must have been a sight to see. And I will admit to you that I was unaware that the circle was removed for as long a period as it was. But still called Symphony Circle? I somehow always knew it had been removed, but didn’t realize it wasn’t returned until 2002!

While there, I had a feeling of community. I chatted with several people on that particular day. Two lived there, two did not. But all four use the circle daily. And all four were friendly and willing to chat. I love that about a neighborhood.

Every time I walk around Symphony Circle, I feel lucky to live in a city where history and architecture are treasured and preserved. And where people truly appreciate the past, and are willing to work together to build Buffalo’s future.

Look around. Take a walk. I think you’ll find Buffalo is a beautiful city, with beautiful people. What are you waiting for?

* All photos in this post are mine unless otherwise noted.