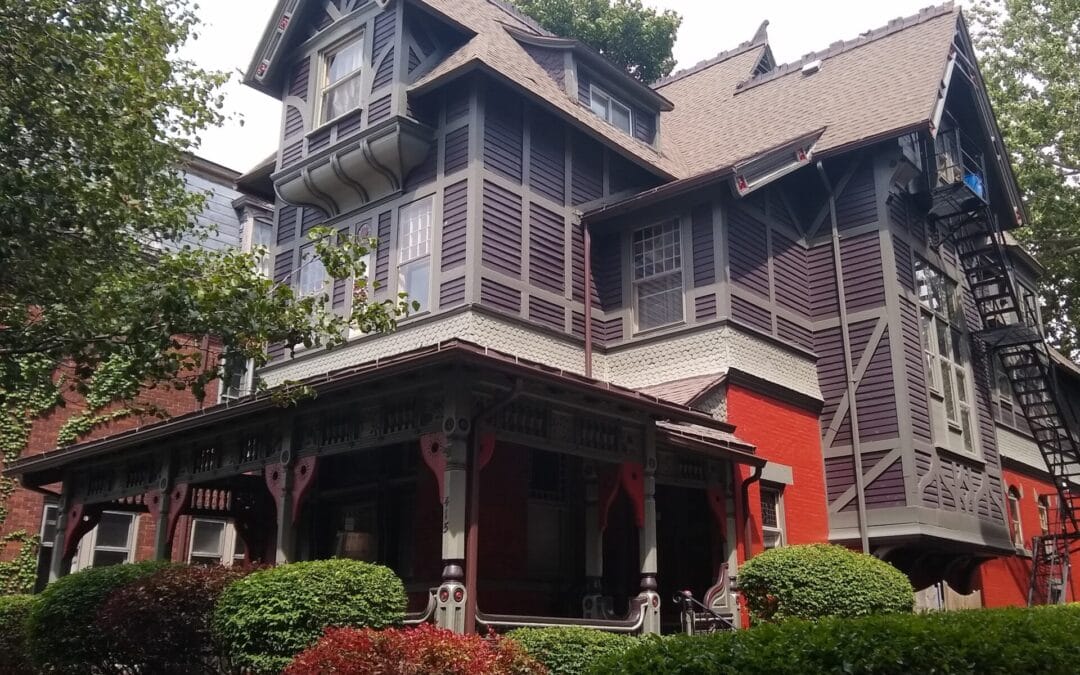 I intended for this week’s post to be about the Hamlin House. But they’re doing work inside, and I haven’t been able to get in to get the photos I want, so I decided to take a walk on Franklin Street anyway. My husband Tim and I walked along Franklin Street, between Edward and Allen. It’s such an interesting street historically speaking. Let me give you a little background on the street itself.

The land that Franklin Street is on was once owned by Ebenezer Walden, an attorney (Buffalo’s first), who came to Buffalo in 1799. So he was here from the very beginning. Walden went on to become Erie County’s first judge. He was also part of the committee that drafted the charter incorporating Buffalo as a city. In 1838 the Common Council chose Walden as mayor of Buffalo. Back in the day, Buffalo residents didn’t vote for mayor, the common council chose one!

In the early years, Walden lived at the corner of Main and Eagle. Later he and his family moved to a home at the corner of Edward and Main. This was considered the “suburbs” at the time. Where people could enjoy estate like living, while being close enough to the ever growing business district downtown.

So that’s the background info. Let’s talk about what Franklin Street is like today. There’s a lot going on here. From historic homes to restaurants, to storefronts and more.

Let me show you what I mean.

As Tim & I round the corner coming off of Edward heading north on Franklin, the first thing we see is what is generally accepted as Buffalo’s oldest tree. It’s a Sycamore, and it is huge. It’s believed to date back to 1710! That’s well before any Europeans settled in the Buffalo area!

Thinking about it now, it’s amazing that the tree survived, considering that the city grew up around it!

Now, the reason I said this tree is ‘generally accepted as the oldest tree in the city’ is that there is another contender for this title. It’s in Delaware Park, inside Ring Road on the golf course. It’s easily visible from the section of the road nearest the 198. (Pictured below.)

Dan Cadzow has a master’s degree in archaeology, is a full time stay at homeschooling father of four. He’s got over ten years of experience in all facets of archaeology. He believes there is a tree just as old as the Sycamore on Franklin. Dan makes his case for the White Oak in Delaware Park here.

Care is being taken to preserve both trees. I like that we do that as a city. And I’m okay with having two “oldest” trees.

Back to Franklin Street

Right across the street from that Sycamore are these two homes. They were both built in 1880 and both are in very nice shape. Note the Medina Sandstone sidewalk in front of the one.

And here’s one from 1890 (below). The blackening of the bricks is not uncommon, but to me, it’s an issue. And wouldn’t it be great if the roof on the entryway were copper? With that copper roof and the brick cleaned, this home would be stunning. I love the way it sits on slightly higher ground. It’s lovely.

Next, we come upon this magnificent stick home. It dates to 1882 and was built by and for, Franklin Caulkins. He was an architect and the detail he put into this home is astounding. Even better though, is how well it’s been maintained through the years. Just look at it!

More of the Homes…

This home is beautiful. I’ve spoken to the homeowner and he tells me he is working hard to improve the home and property. I would love to see the inside. This is one to watch!

This home was built in 1877 for Frank Hamlin, the son of Cicero Hamlin. We’ll talk about Cicero in a minute. The home was designed by the architectural firm of Richard Waite who incidentally, hired the first woman architect in the country, Louise Blanchard Bethune. She was a Buffalonian! The home is beautifully maintained by the law firm that now owns it.

And this home! Beautifully restored in the past several years, it’s just gorgeous. The house, the gardens. It’s all so well done! Even the curb strip is fantastic, with a delightful mix of pavers, stone, and flowers. I especially love to see this place looking so great because it’s a Green & Wicks, one of the most prolific architectural firms in Buffalo.

This home (pictured below) was built in 1865-66 for Cicero J. Hamlin. He was to become the wealthiest man in New York State, outside of New York City. And by then he and his wife had moved to a Delaware Avenue Mansion. So, I suppose you could consider this their starter home.

Hamlin was a glucose sugar manufacturer. Now there’s a business you don’t hear about when you talk about the big businesses that were in Buffalo back in the city’s heyday. Usually, you hear about shipping, grain, railroads, automobiles, aeronautics, and steel. But here was Cicero Hamlin, the wealthiest man in Buffalo, the largest employer in the city at one point, and he was in glucose. Who would have thought?

It’s a beautiful home. It serves a dual purpose, it is home to the American Legion Troop I, Post 665. The American Legion owns it, and leases it to the people who run the restaurant and banquet hall, called of course, The Hamlin House. The inside is much the same as it was when the Hamlins lived here.

Here’s an interesting side note. Cicero was into thoroughbred horses and owned a farm in East Aurora. He donated the land that is now Hamlin Park in that town. He also owned and operated a horse racetrack, the Buffalo Driving Park in the city. The land that racetrack was on was sold by Hamlin’s descendants in 1905 to a developer. The Hamlin Park neighborhood was established there, which is now a historic district on Buffalo’s East Side.

Here are some of the homes we came to next. Businesses in the grouping include Lace & Day; The Franklin Salon + Esthetics; and Fat Bob’s Smokehouse (red painted brick building).

This home (below) was purchased in 2003 by Don Gilbert and was in need of total rehab. The property was painstakingly transformed from the 32 room boardinghouse into 7 historic apartments and just look at it! It is absolutely stunning. The Allentown Association gave this home a beautification award when it was completed in 2008, and an award from Preservation Buffalo Niagara for Rehabilitation/Adaptive Reuse. Excellent!

This one below looks like a beautiful home but is in fact offices now. Love that they kept the charm of the house intact. Buffalo architect, George Cary lived in this home, although he didn’t design it. He made changes to the home though, including the addition of the front patio and the second-story porch. If you’ve been to the Buffalo History Museum, you’ve seen George Cary’s work.

I’d love to see the second story shutters put back where they belong on this house. Perhaps they are simply being repaired? Let’s hope.

While photographing the home below, the owner came out to talk to us. We got into a conversation of course, about his home. He told us it was the former home of Tony Sisti and the Sisti Art Gallery. Tony Sisti was a well-known artist who was also, believe it or not, a boxer. As a matter of fact, he often boxed to finance his exhibits. It seems that art was his true calling, but sometimes, boxing paid the bills. Sisti was one of the founders of the Allentown Art Festival. Tony Sisti Park, at the southeast corner of Franklin and North, is named for him. Learn more about Toni Sisti here.

The owner took us along the side of the house to the private entrance to the apartment that he rents as an Airbnb and let us go in. I was so taken with the Sisti painting on the wall, it’s the only photo I took inside!

The room itself was very quaint. Photos of the Airbnb listing are here.

After seeing the 1974 photo above, I can’t help but wonder what the place looked like when Sisti lived here. When, oh when is time travel going to be a thing?

Take a look at the walkway and yard. I love the bones of it! The art pieces, of course, are gone. But all the wrought iron is still there. It wouldn’t take too much to get the yard in shape for get-togethers. All it would need is some elbow grease, some candles and twinkle lights, and re-arrange the furniture that’s already there. Gather up some good friends and family for some summer fun. I can see it now.

My Impressions of Franklin Street

Wow! I’ve been down this street so many times before. But I’ve never really looked at it with a critical eye. There is so much going on here. It’s amazing what you see when out on an urban hike. Or bike riding. You never see this stuff when you’re driving!

I’m even kind of glad I wasn’t able to get into the Hamlin House. I wouldn’t have experienced all the other homes on the street up close and personal!

Would you believe that I’ve never noticed the Franklin Caulkins home before?! That’s the incredible stick style home in the lead image. I can’t believe I’ve missed it all these years.

Not to mention the Sisti Art Gallery home. I mean, I’ve seen those enormous pillars out front, but never really looked at the home itself. I’ve never wondered what it used to be, or why those crazy pillars are there. I for one would like to see this house fixed up. But alas, I don’t own it, soooo. I’ll have to be content with my daydreams about parties in the yard under a summer sky, surrounded by twinkle lights and good friends.

When you can, walk or bike instead of driving. You’ll see new, interesting things. You’ll meet new, interesting people. And walking and biking are great for your health. Enjoy your city! There is good everywhere. Go find it!

*There are a few houses that I couldn’t get good photos of on the day we were there, because there were trucks parked in front of them. So if you’re looking for something in particular and it’s not here, that’s probably why.

**Here are two more photos from the Sisti Gallery Home