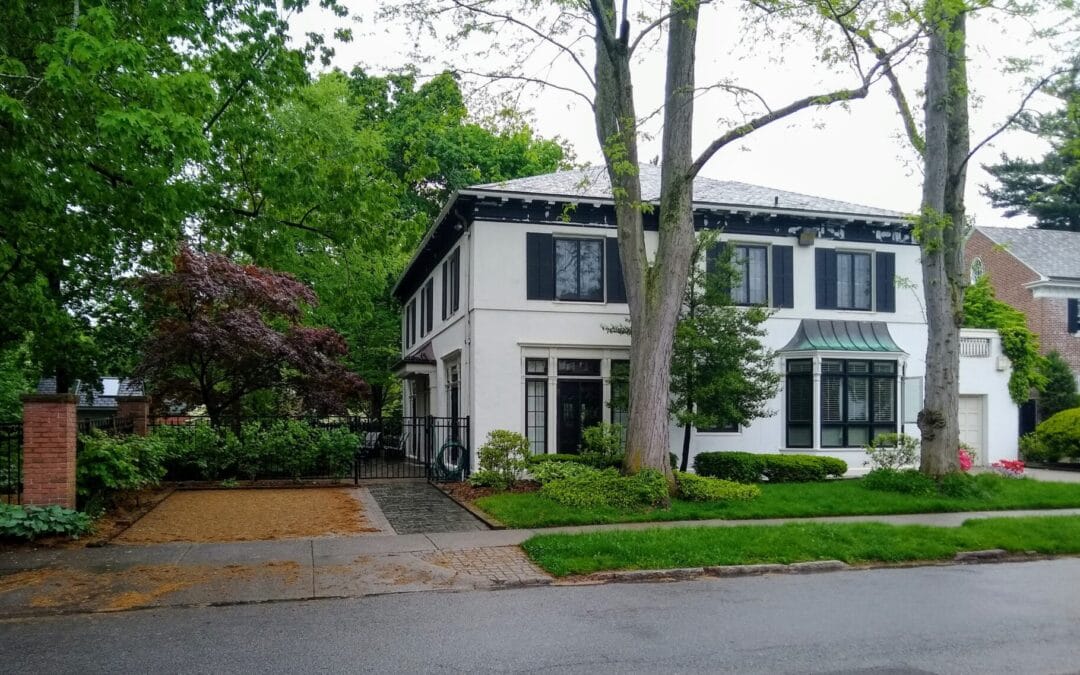 As most of you know by now, I love my city walks. Today I want to show you the Albright Estate.

Last summer my husband ran a 5k race that started on West Ferry. 780 West Ferry to be specific, now the home of Buffalo’s Ronald McDonald House. Since it was a beautiful summer evening, I decided to take a walk through what used to be the Albright Estate, or the Albright Farm some people called it.

Without getting super into his life and work, that’s a very long story for another day, let’s just say John Albright was a mover and shaker in Buffalo’s gilded age. Everyone who was anyone knew John Albright. His estate was one of the catalysts of society here in Buffalo.

Now, his home did not survive to be preserved with some of our other great architecture. And that is truly a shame, because it was designed by Albright’s close friend, E.B. Green. And it was pretty spectacular. Green fashioned it after a manor house at St. Catherine’s Court of England.

If you follow architecture of any sort in Buffalo, you’re no doubt already familiar with E.B. Green. He was one of Buffalo’s most prolific architects. Many, many of E.B. Green and Associates buildings and homes are still around. He was born in 1855 and died at 95 years old. And was actively designing up until shortly before he passed!

Anyways, on with the walk about.

As I round the corner from West Ferry onto Tudor Place, I’m not sure where to look first. So many gorgeous homes. Here is some of what I saw.

And this home, that I happen to know a little bit about.

This house was built by Louis Greenstein on a piece of land bought from John J. Albright in 1925. Greenstein was an architect, and he purchased the land in his wife Shinah’s name. The property was previously on the grounds of Albright’s estate that faced West Ferry, just around the block. In fact, all of Tudor Place and a good part of Cleveland Ave. was built on the former Albright estate.

The brick wall on the north side of this particular property originally surrounded the entire Albright estate. My photos do not do this house justice. My father would call this home ‘very well appointed’. It means that the person who built it did it in the best way possible, using the best materials, while showing great attention to detail. That definitely describes this house.

While on Cleveland Ave., I came upon this gem. Last week, a woman asked about it on a facebook page I follow. She was looking for photos because she had grown up in the house back in the 60’s.

This one is fantastic! If you’d like a look at the inside see this link. It’s beautiful, but I don’t love the kitchen, and I don’t think the whole house should be grey and white. Don’t think either fits with the era of the home. But that’s just my opinion. And it does make for a blank slate for the new owner…it was sold in 2019.

Here are a few more interesting homes on Cleveland Ave.

This building was built in 1894 to accommodate horse drawn fire equipment. The first floor had space for the equipment and horses, and the second floor was for the crew. It was designed by Edward Kent, a well known Buffalo Architect, who by the way, was the only Buffalo resident to perish on the Titanic. Read my post about him here.

Here’s one you may not have heard of, and several years back I didn’t go down this street because it appeared too private. But I’ve been through it a couple of times since, but really, it is private. And full of trees. And quiet. Real peaceful. You would have no idea Elmwood Ave is just one block over.

On a side note, the name of this court was inspired by the fact that E.B. Green used a manor house of the Court of St. Catherine of England for the inspiration for John Albright’s home, which I mentioned earlier. I love that the street name is historic. Thank you, whoever is responsible for that.

Back out on Cleveland Ave. I head towards Elmwood Avenue just to see a house that used to be owned by the Canadian government. That may seem random, but I used to work at the Canadian Consulate when they had an office here in Buffalo. They owned several properties in the area, including an absolutely gorgeous home on Soldiers Circle, a ranch on Nottingham Terrace, a couple of condos on the waterfront, and a home on Cleveland Ave. It’s the last house on the north side of the street, right next to Spot Coffee.

If you think about it though, a home on Tudor Place or St. Catherine’s Court would have been more in keeping with all the other residences they owned.

Funny story, the first (and only, I believe) diplomat to live in this house absolutely hated it. You see, she was very private. She hated the location, right next to a very lively coffee shop with outdoor seating. And right around the corner from Elmwood Ave. There were stories of her calling Spot Coffee nightly to complain about patrons laughing and talking on the patio. How dare they? Ha!

The Canadian Government had central air installed, bought her a white noise machine, and I guess that was the end of it. Never would have had this issue on St. Catherine’s Court!

As I head back over to West Ferry by way of Elmwood Ave, I passed through the grounds of the Unitarian Universalist Church, which was also designed by architect Edward Kent, whom I mentioned earlier. Here’s the one shot I took.

On this particular evening, I wanted to check something out that I heard about after I wrote about Mayfair Lane in my last City Living post. I was told by a reader there was a copycat Mayfair Lane on West Ferry near Elmwood. And not a very good copy. Let’s see.

Yep, it’s right there, with a city street sign on the road proclaiming it’s a city street. And yet the road is marked a private lane. Here’ what I saw. Similar idea. But I think you’ll agree it’s not at all like Mayfair Lane. Nothing against anyone who lives in this perfectly great location, just that it’s no Mayfair Lane. The reader was right.

Back to West Ferry

After passing by Brittany Lane, this is the first thing I see that peaks my interest on the north side of West Ferry. I love trees, and this is a particularly nice one, so I’ve included it. Note how hidden the home is, and I’m sure it’s a beautiful one too. Oh well.

This is the next thing I notice on West Ferry. It’s now called Queen Anne’s Gate, and was the original gate that stood outside the Albright Estate. It appears to my eye anyway, to be very original. The opening was not made for large vehicles. I would think a pickup truck might not fit, that’s how narrow it is. Wish the estate house was still there.

I did not enter the gates on this visit. Maybe next time.

I wanted to mention just two other noteworthy buildings on this side of the street. Both are technically outside the original Albright Estate boundries, but both eventually became part of it, if even for a short time. The first is at #780. It is the Dr. Alexander Main Curtiss home and was built in 1895. The reason I mention it is because the second owners were Mr. and Mrs. Evan Hollister. And Mrs. Hollister was Ruth Albright Hollister, John J.’s daughter! Are you surprised? No, I’m not either.

It must have been a lovely place to live. Now, it’s the home of our local Ronald McDonald House. Beautiful. Just beautiful.

And I can’t get away without a few shots of 800 West Ferry. The famed apartment building. Here’s what I know.

Albright bought the property in August of 1905, when it was the home of William Hengerer, well before the apartment building was there. Just two months later, he sold it to William Gratwick. So, he only owned it for, probably less than, two months!

The building that is there now was a million dollar apartment building, built by Darwin R. Martin. He was the son of Darwin D. Martin, who was responsible for the Darwin Martin House on Jewett Parkway over in the Parkside Neighborhood.

Originally, on the ground floor, there were four one floor apartments. On the next eight floors there were 16 two-story apartments, and the top two floors were for Darwin Martin himself. There is parking underneath the building. During the depression, the apartments, which were originally quite large, were broken into smaller apartments and remain so today. I’ve never been inside, but boy would I love a tour of this place! And that entryway! It looks like an altar!

I love the history of this block. The estate is fascinating. I mean, most of us cannot even begin to imagine owning the kind of land that Albright owned back in the day. At one point, he owned almost the whole city block contained within the boundaries of West Ferry and Cleveland Ave, and Delaware and Elmwood. Save for the land at 800 Ferry, and a plot over on Cleveland Ave. He donated the land for the Unitarian Universalist Church at the corner of Elmwood and West Ferry (pictured above). He was also the benefactor of our Art Gallery here in Buffalo, and many other buildings as well, both here and in Pennsylvania, where his parents were from.

This is one of those places I go back to again and again. I get a feeling of comfort and genteel living on and among these streets, with the possible exception of Brittany Lane! But almost all of the homes that are within the walls of what was Albright’s land have that ‘this is how the other half lives’ feel that most of us cannot even imagine. It is indeed, the stuff of daydreams.

**Lead image is on Tudor Place – love the trees! Nobody ever puts trees that close to their houses today!