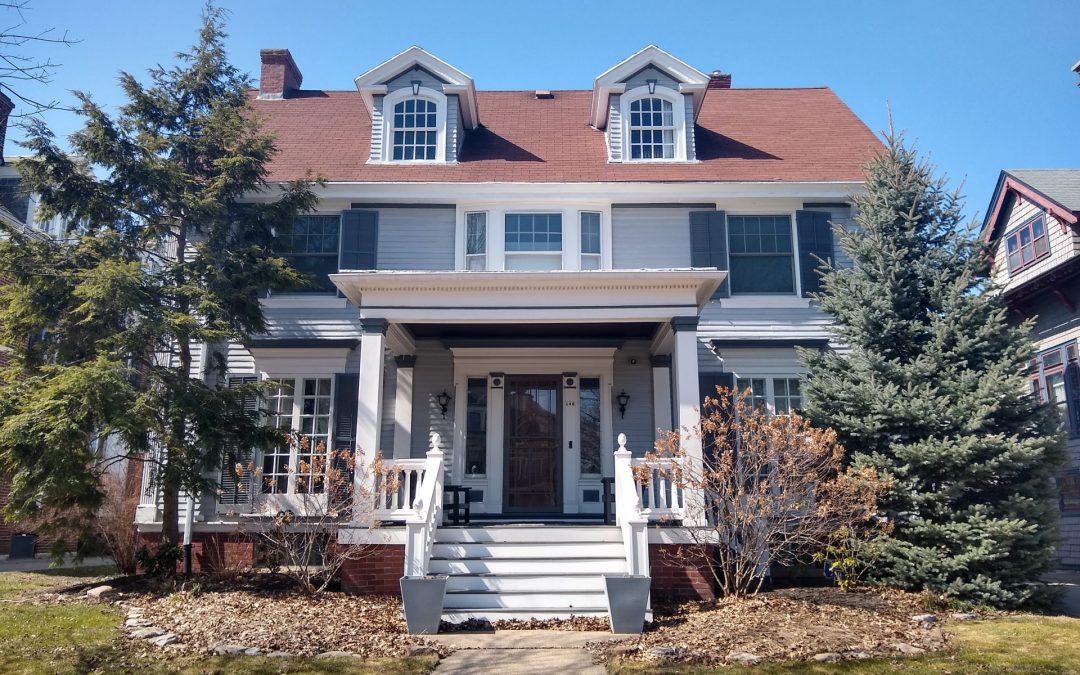 Last week I headed over to Chapin Parkway to check out a street that a reader mentioned to me. While hiking around the area, I happened upon the south end of Windsor Ave. I wrote about a few of the Larkin homes between Rumsey and Forest Ave, but I’ll admit, I’ve never been on this end of the street. Well, that’s not exactly true.

Years ago, while I was still working for the Canadian Government here in Buffalo, I did leave the official residence (which is on Soldiers Circle) through the backyard once with a friend to head over to her house, which was nearby. You see, there are a few homes on Soldiers Circle whose properties extend to Windsor Ave, and have their garages facing Windsor. To be fair though, we headed toward Chapin Parkway, and didn’t see much of the street.

But this day, on foot, walking from Chapin Parkway down to Forest Ave, I saw the street through fresh eyes. Come hike with me.

This is the first home I came to when I turned off Chapin Parkway. And what a home this is. It was built in 1910, and is that the original hardware on the windows? You know, the kind that held the storm windows/screens in place? Love the diamonds in the upper windows and the front porch is lovely. I especially like the three columns with their details at the capitals. The paint is perfect here.

And this pretty home, below. There is so much going on here. I love the Palladian window on the second floor. All the windows for that matter. I think they may be original. And the trim colors are fantastic. Look at the details in the eaves! Goes to show what you can do with paint. Fantastic!

Next I came to these. This first one looks beautiful now, but in the summer it must be stunning with the trees in bloom. I’ll have to come back to see it. The other two make my point about color making all the difference in the world.

There’s a start with the blue and white trim on this one. It would be great if the blue were extended onto the balustrade or balusters, around the windows and maybe the peak. That would really make this house pop, as they say.

The green with the mustard yellow and dark red trim has been painted within the past, oh, 10 years or so. Looks very different from how it used to look, it’s beautiful!

Mary Carr (Mrs. Robert U. Carr) was living in this home, above, in 1945 with her husband Robert and mother-in-law Anna. Mary took up a very unusual hobby. She wrote books for the children of the family, about the childhoods of their parents, aunts and uncles, and grandparents. Often telling funny stories of a bygone age, amusing anecdotes, and poetry written by her mother-in-law, Anna, Mary would compile the books. She’d use magazines, greeting cards and advertisements to illustrate them, type them up on loose leaf, and cover them with different material for children, and sometimes leather covers for adults.

She did one for each child in the family. Word got out and the requests started pouring in, and she ended up making over 100 of them for friends and friends of friends. It was said that she was fascinated by history and days gone by, especially when that history included friends and family. What a unique hobby. I think I would have liked Mary Carr.

The Larkins on Windsor

In November of 1929, the Buffalo Courier Express reported that Mr. & Mrs. Charles Larkin moved into this home, below. They had previously moved to California about ten years before. I was unaware they came back ten years later.

The home is a beautiful two family though. If you want to see what that room above the front entryway looks like on the inside, take a look at this recent listing. Very charming. That would be my reading nook/sleeping porch. Because everyone needs a good sleeping porch.

This one, below, was once owned by Harvey D. Blakeslee, Jr., a Buffalo attorney who founded Mortgage Service Corporation. He was a 1902 graduate of UB Law School, and served on several boards in the city. He lived here with his wife, Eleanor, his son and two daughters.

This next home was built in 1910 or 1911, by R.W. Goode and Company (developers) but it doesn’t appear that it was sold until 1918 (that’s when city tax records begin for this house). This is the case with many homes on this street, where they were built in or around 1910, but not sold until several years later.

This house, above, is great! It’s almost as if everyone on this street consulted with designers when choosing the colors of their homes. Because they’re all spot on with the colors of the period. This one included. Love it.

I wondered about the date discrepancies though, and had a theory, but it was only a theory. Until I met Nancy on my hike (you’ll see Nancy’s house soon). She mentioned that she had heard from a neighbor on Soldiers Circle that this section of Windsor Ave was a “model” street. This is where the developers built a variety of homes on one street, and used them as model homes, showing them to potential buyers. This enabled the developers to fill in the neighboring streets with homes that were already sold. This street definitely has a variety of styles. Where you see two homes with similar styles, you’ll see a different style porch on each, or an offset front entryway on one, etc. Definitely makes sense with this street.

I gotta tell you, it makes for a beautiful, architecturally diverse street.

Just Look at These!

This first one, the navy blue with white trim, wow! Now, that is my style! I love the front porch with the glass sides. So pretty!

This next one was owned at one time by Spencer Kittinger, President of the Kittinger Co. Inc. The Kittinger Company was a very successful local furniture maker. Nice!

This next one is interesting. It was formerly owned by Daniel L. Rumsey and his wife, Luella Mary Nitterauer Rumsey. Of note, this whole area was once owned by the Rumsey family, and they sold it off slowly from the 1890s through 1920 or so.

It’s an interesting house too. From what I can gather, the brick section, although it appears to be an addition, has been there from the beginning. Very different.

Check out these next several homes…they’re spectacular!

These next two are the same house, but photographed from two different angles. The third is the same style house, but executed quite differently. I am reminded that this street may have been a ‘model street’.

Crossing the street, I come to this magnificence. I have always admired the side entry to this home, and everything else about it for that matter.

This home, below, has one of the sweetest stories of all. But before I get to that, note the side porch and how it has windows on the windy side, and the colors are spot on. Very pretty house.

Cara H. Wheeler lived here with her daughter Mary and Mary’s husband. Cara lived to be 102 years old! She appeared in Buffalo papers several times, twice for voting in every election since women won the vote (when she appeared in the paper for it, she was 93 and 94 respectively). Once for being a frequent airplane traveler (when she was 93!). And she appeared one last time when she passed away in July of 1960 in her obituary. That makes her birth year 1858. Amazing!

At her 100th birthday dinner, Cara’s son presented her with a bound book (seen in photo above) of birthday greetings from all over the world, including then President Eisenhower, Richard Nixon, Billy Graham, the Most Rev. Fulton J. Sheen, Rocky Marciano, Mickey Mantle, Edward R. Murrow, Helen Hayes, Bing Crosby, Ed Sullivan, Lawrence Welk and more.

Cara Henry Wheeler is buried in Forest Lawn Cemetery. Going to have to look her up next time I’m there.

And then I came upon this gorgeousness! This is where I met Nancy (I mentioned her earlier). She’s been living here for 17 years and absolutely loves the neighborhood. She grew up on Lancaster Ave so she knows a thing or two about city living. Nancy pointed out something that I noticed as well. On Windsor Ave, there is space between the homes. Every home has a driveway. Honestly, that may have something to do with the ‘model’ street thing. If it looks perfect, it will sell quickly and easily. And this street certainly looks perfect.

About the house. There is so much to love about it. The original windows, the colors are muted but classic, the sunburst balusters in the balustrade. The fan window in the pediment, the natural wood front door flanked by leaded glass sidelights. It’s all these little details that make you look twice when you pass a house.

Nancy was open and friendly, despite the fact that I interrupted a visit with her friend, Liz. Sorry about that ladies, I was just so taken with the house. Thank you both for your Buffalo friendliness.

There is a stone wall that ends at Nancy’s driveway. It is left from the estate of Ellsworth Statler, which was at 154 Soldiers Place. The wall runs along this section of Windsor, turns the corner at Bird, and ends just before Soldier’s Circle. Take a look.

There are two homes on Windsor within the Statler walls. I can tell you that the wrought iron in this wall is among the most substantial I’ve ever seen. The houses are lovely, but I would love to see what was originally here.

I am very glad that I happened upon Windsor Ave that afternoon. It really is a wonderful street, with very friendly neighbors. Nancy was lovely, and because it was a warm sunny day, I met a few others along the way as well, out for walks themselves. All say they love living here. And what’s not to love?

There are beautiful homes with ample yards. If you compare the lot sizes here to other streets nearby, and I’m talking about other comparable streets (Clarendon, Berkley, Granger), Windsor has the largest lot sizes around. This enables the residents to have driveways to park their cars. I know there are people who think that city dwellers shouldn’t need to have a car, but the fact remains that in Buffalo, we still need our cars. And having a decent place to park them is a huge bonus.

In this month of March, when we celebrate women who made history, I find it fitting that most of the interesting history here on Windsor involved women. One who was a history buff herself, and one who took the right to vote so seriously that she never missed an election once women fought for and won that right.

Of course, in their time and in the articles I read, they were referred to as Mrs. Robert U. Carr and Mrs. Clarence L. Wheeler. I actually had to really dig to find out what Cara Wheeler’s given name was, and I only found it because I found a copy of her obituary. And even then, I learned her middle name was Henry! We’ve certainly come a long way.