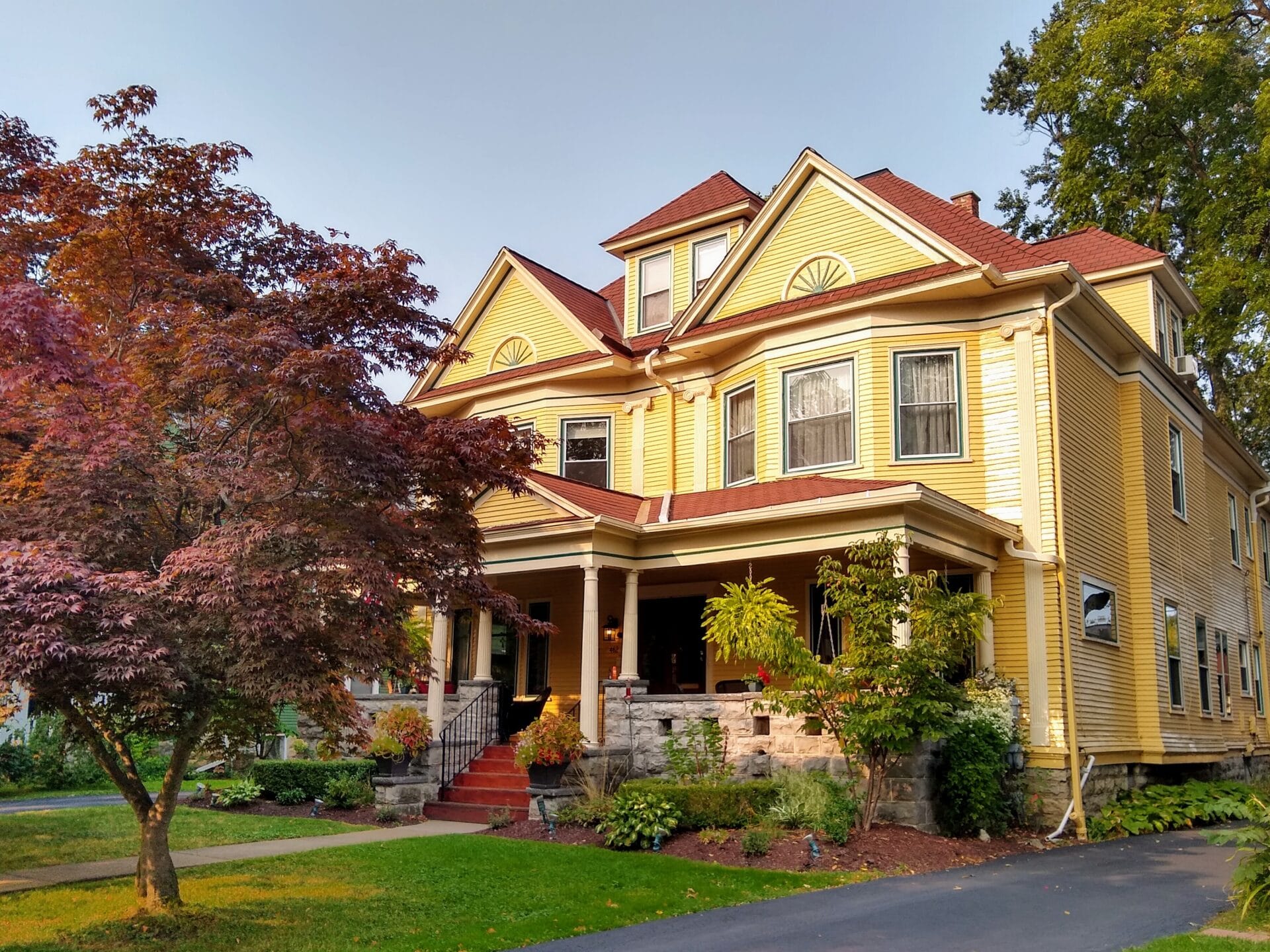 On Monday as I sipped my morning tea planning out my week, I decided to get back into Parkside for a hike. And I thought of Woodward Ave and how enchanted I was with the street several years back when friends of ours from Indiannapolis visited. We had a wonderful visit, and while they were here, they stayed at the Parkside House Bed & Breakfast at number 462 Woodward. Before that, I didn’t even know it existed. But what a gorgeous place it turned out to be. I wanted to go see it again.

I called the owner, Chris Lavey, and he agreed to meet with me. So Woodward Ave it is this week.

We might as well start with Chris at the Parkside House Bed & Breakfast, because it’s where I started. What a pleasant, engaging person Chris is. I can picture him making friends with most of the people who stay at his house. And speaking of the house, it was built in 1898 as a duplex for two sisters. Which makes it perfect for a B & B. Chris lives on one side and operates the B & B on the other.

He has painstakingly restored this home over the course of a dozen years, pulling down drop ceilings, restoring woodwork. Blending old world Victorian charm with all the creature comforts we are used to today. Everything you’d want in a B & B. And he did it beautifully.

The front porch and second floor back patio alone are a good reason to stay at this place, they’re just lovely! I could easily see myself enjoying these outdoor spaces. Especially when traveling, those quiet moments in the morning, or at the end of the day. Just the kind of outdoor spaces you need, cool in the summer, comfy and cozy in the spring and fall.

When we spoke on the phone, Chris mentioned that Covid-19 has affected his business exponentially. But he is grateful to have had the visitors he did have this summer. Like everyone in the hospitality business in 2020, he is hopeful for the return of travel and tourism in 2021. I for one, would much rather stay at a small, intimate place like the Parkside House than a large, chain hotel.

What Else is on Woodward?

A lot. A real lot. Let’s check it out. The homes are amazing, but the people are friendly too. I walked up one side of the block between Crescent Avenue and Jewett Parkway, and back down the other, beginning and ending at the Parkside House. I passed what I would call many people. Some walking, some on bikes. Others sitting on their porches, some working on their homes. Everyone said hello. All of them.

Look, you know I walk all over the city. I say hello to everyone I meet. Everyone. Some say hello back, but some don’t. For whatever reason, some just don’t feel comfortable responding. That’s okay. I get it. But on Woodward, every single person I said hello to, responded. Every single one. I love that about a neighborhood.

So we’ve established that Woodward has friendly neighbors. But the homes! These houses are what attracts people to a street like Woodward. The friendly neighbors keep them here. The two together is what city living is all about!

The homes are a nice mix of architectural styles. Queen Anne, Victorian, Shingle, Romanesque Revival, Bungalow and Colonial Revival styles are all represented, with the occasional Tudor thrown in. The paint colors can be described as everything from traditional to eclectic. I never would have been able to dream up some of the color combinations, but almost all of them work. Take a look.

Check this Little Guy Out

Then I reached this house where I asked the woman on the second floor patio if I could take photos of the house, she said yes immediately. Note the tie rod and anchor holding the chimney secure to the roof. It’s a nice one. I like the windows here too.

It was then that I realized that her cat was watching me from the picture window. He then looked to her. Cutest photo bomb ever! We laughed and chatted for a few minutes before I moved on down the street.

After that, I was meeting people left and right. Like these two guys – very willing to mug for the camera. Thanks guys!

This would be a good time to mention that I saw several homes along Woodward getting some sort of work done. That’s also another good sign in a neighborhood. People are taking care of their homes. Love the tripartite windows on the third floor of this one, and that wide entryway on the second floor. It’s not often you see that. This home is lovely.

And these. Love the way these homes are being cared for.

Then I Met Mike

A bit further down the road, I met Mike. Unlike the Mike I met last week at Colonial Circle, Mike is his real name. His house is not technically on Woodward, it’s on Jewett. But the bulk of the land is on Woodward. Plus it’s spectacular, so I’m including it.

When I met him, Mike was doing what some men (my husband included) do best. He was puttering. And I mean that in the most positive way possible. Literally, he told me he was playing around with some Ambrosia Maple wood he had left over from a building project (a table) he had recently completed. If that’s not puttering I don’t know what is!

But seriously, people who putter have the best looking houses. And Mike’s is right up there. Just take a look at this beautiful bungalow.

The Home has Received Some Notoriety

Mike tells me the house was featured in American Bungalow Magazine (at least I think he said American Bungalow). Specifically, the windows. And they are spectacular. He pointed out that the porch was enclosed in the 70’s for an attorney who made it his office. Mike didn’t seem to love that part of the house, but I think considering it was done in the 1970’s, it looks pretty good.

We go into the yard and around the home looking at all the little details. It’s fantastic! The wrought iron detail in the gate is repeated in the side yard on the entryway, in a frame at a window at the back of the house, and on the front trellises. Mike tells me he got it from his brother, who was getting rid of an old wrought iron fence. Great reuse.

The brick pavers were salvaged from Ft. Niagara. Love the wear on these. Another great reuse.

It’s all these things that bring a house to the next level. This home is fabulous, and the yard is a veritable oasis. Thanks for the tour Mike, and for being so friendly.

As I leave Mike’s driveway, he goes back to his puttering. I expect to see some Ambrosia maple accents on this house soon. It’ll be perfect!

As I cross the street, in between the houses, I see the Darwin Martin Complex on Jewett Parkway. That, my friends, is for another post. But not today.

Today, I will only mention the Gardeners Cottage. It’s part of the Martin Complex, but fronts on Woodward. It was designed along with the Darwin Martin House, as the gardeners cottage and is of the same style as the house, Frank Lloyd Wright’s Prairie School design. With much less detail, and lesser materials, but a stunner nonetheless.

Here, I have a personal story to tell. In 1962, my parents were looking to buy their first home. The Gardener’s Cottage was for sale, and they looked at it. They didn’t buy it for two reasons. One, it was $3,000 over their price range (!) and two, my father thought the wide eaves made the interior too dark.

When my Dad told me this story, oh, I would say within the last five years or so, I couldn’t believe it! I could have grown up in a Frank Lloyd Wright designed home! But it was too dark, and for a lousy three grand?! Oh the missed opportunity! Just kidding (sort of).

To be fair, three grand was a lot more money back then, and I’ve heard that Darwin Martin’s wife, Isabelle, didn’t love living in the big house because it was so dark inside. You see, she was nearly blind, and light mattered. The Martins lived there over 20 years. Wonder if she was nearly blind before, or after twenty years of living in the dark house? Mom and Dad may just have dodged a bullet there…

Here are some more beauties on Woodward. All fabulous in their own way!

You can’t walk this section of Woodward without noticing St. Mark’s Church and school complex. Honestly, I was a bit taken aback by the size of the property. I never noticed how large it is.

Roughly 850 families are registered as parishioners, and 400 children attend the school. The parish was founded in 1908, with the first Pastor being Rev. John J. McMahon (later Bishop John J. McMahon). The church building you see here was built in 1914, and the school was opened in 1921. And apparently, according to Business First, St. Mark’s school is ranked the #1 private school in Buffalo. Nice!

Here are some more homes to round out my hike today. Note the use of color, flowers and landscaping. All of these make a difference in how you see a home as you pass by. Not to mention the architectural details. Take a second to look at the roofs, the windows, the entryways, the brickwork and the whole esthetic. Each of these homes is fantastic in its own right.

I cannot believe how difficult it was to choose which photos to include and which to leave out. So many great homes on one street. And I didn’t even walk the whole length of the street. Buffalo is full of beautiful homes! We only need to get out and walk to notice them. This street, I’ll admit, was a bit overwhelming. There were so many to choose from.

I was pleasantly surprised at how much I enjoyed the colors of some of these homes. The orange / yellow colors especially. When I first saw them, I didn’t want to like them, but I couldn’t help it! The colors blended so well with the trees and the landscaping, and with this particular neighborhood. My newest favorite house colors!

Next time you’re looking for a walk where you want to be wow’d by the homes, check out Woodward Avenue over in Parkside. The homes are amazing, and the neighbors are friendly. I’d live here. The homes draw me in, and the people would make me stay. Plus it’s close to the zoo, the History Museum, Delaware Park, the Art Gallery. The list of advantages goes on and on.

*Get the book! They make great gifts for family and friends (or yourself!).  Click here or on the photo below to purchase.

**All the photos in this post are mine unless otherwise noted.