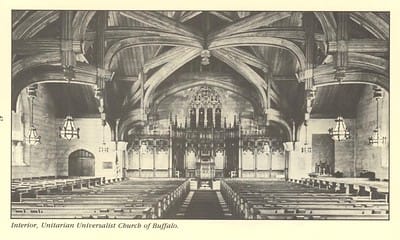 A few days ago when I wrote Titanic – The Buffalo Connection, I learned quite a bit about Edward Austin Kent, who lost his life when the Titanic sank. I was so intrigued that I decided to learn more and to bring it to you. This is still the anniversary week of his tragic death after all. And the whole story of the Titanic disaster is irresistible to a history nerd like me.

So here we go.

Edward Austin Kent was born in Bangor, Maine in 1854. His parents, Henry Mellen Kent and Harriet Farnham Kent moved to Buffalo in 1865. Henry, a dry goods merchant, together with W.B. Flint, bought a large department store and renamed it Flint and Kent. Buffalo already boasted several great department stores, but Flint and Kent would become known as one of Buffalo’s finest.

Edward, like most sons of Buffalo society, attended the Brigg’s Classical School of Buffalo, an elite college preparatory school located within the park on the Rumsey Estate. He later graduated from Yale, and studied architecture at L’Ecole des Beaux Arts in Paris, where both Louis Sullivan (Guaranty Building) and H.H. Richardson (Richardson Olmsted Complex) studied. He also spent time studying in England. Pretty impressive education.

Kent came back to the states in 1877, settled in Syracuse, NY, and became a junior partner in the architectural firm of Silsbee and Kent. He then spent two years in D.C. as a government architect, which seems like an odd move. A step down? Or was government work like this viewed as prestigious back then? Doubtful. I suppose we’ll never know.

Edward returned to Buffalo in 1884 and started his own Architectural firm and later located it in the Ellicott Square Building. The firm was quite successful. Here’s a fun and little known fact: together with his brother William, also an architect, Kent designed the much acclaimed mosaic floor in the Ellicott Square Building. People talk about the floor all the time, but not who designed it!

Kent was among those who founded the Buffalo Society of Architects in 1886, and was voted their first Secretary. In 1890, that group merged with the American Institute of Architects. Kent was elected their president three times. He represented the Buffalo Chapter of the AIA at an international conference in Berlin in 1909.

By all accounts, Edward Kent was the consummate gentleman. It doesn’t appear that he ever married, or had any personal entanglements of any kind. None that are recorded anyway.

Let’s take a look at some of his most notable designs.

Some of Edward Kent’s Notable Designs

In January of 1912, Edward Kent, a frequent traveler across the Atlantic, embarked upon a two month vacation that took him to Egypt and France. He also spent some time in England while delaying his return to the states in order to ‘sail’ aboard the Titanic.

He boarded as a first class passenger, enjoying all the comforts that came with that. He met frequently with a group of friends, among who were Helen Churchill Candee and Archibald Gracie, and mingled with other members of society on board. It is unclear whether Kent was asleep when the ship hit the iceberg, or whether he was with some others of his group in the smoking room. I’ve read accounts stating both.

But what is well documented are these two things: First, Kent encountered Helen Churchill Candee and helped her into lifeboat #6, but not until after she gave him an ivory and gold miniature of her mother, for safekeeping. And second, Kent helped to load many women and children into lifeboats before the ship listed heavily, and he was swept into the sea.

Edward Austin Kent’s body was recovered (body #258) and was returned to Buffalo. Incredibly, the miniature given to him by Helen Churchill Candee was still in his pocket and was eventually returned to her. Kent is buried in Forest Lawn Cemetery here in Buffalo.

As I’ve spent time reading about Edward Kent it occurs to me that outside his body of work, and a few scant details of the Titanic disaster, we don’t really know much about him personally. He was from a family of both wealth and stature here in Buffalo, and his family was active in the Unitarian Church (as it was called back then). It is likely that when John Albright donated the land for the church in 1906, that Kent was chosen to design it partially because of that connection. To my eye, it’s his greatest work here in Buffalo.

Make one of your quarantine walks down Elmwood Avenue to the corner of West Ferry and check out that church. It’s beautiful from the outside. But when the quarantine ends, go inside. Like so many other churches in Buffalo, it’s true beauty lies within. Take a moment to search out the plaque to Edward Austin Kent, and think about the man who helped so many find safety that fateful night in April of 1912.