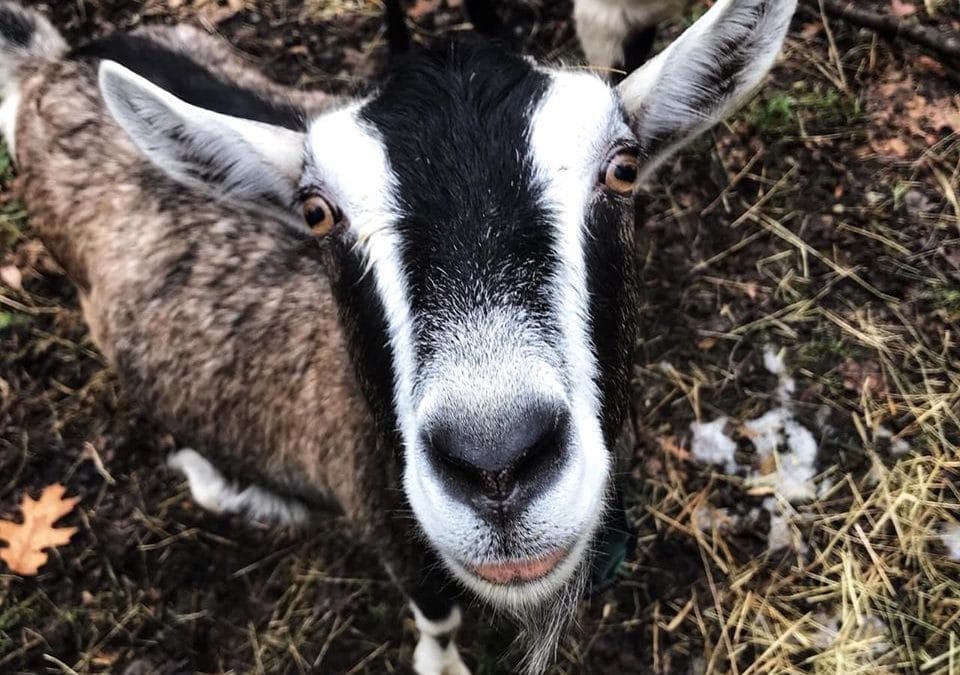 When I wrote a post about Urban Farming in Buffalo last summer, I called what organic urban farmers are doing ‘back to the future’. By that I meant that they are farming the way it was done before we humans mucked it up with chemical fertilizers etc. I feel the same way about Jen Zeitler and Let’s Goat Buffalo.

I had the opportunity to sit down and chat with Jen, one on one, a couple of weeks ago. Here’s what I learned.

How It All Began

So, my obvious first question for Jen was, “How did you get started as a goat herder?” Now there’s a question that doesn’t get asked very often! Jen explained that she bought four acres of land in Franklinville, with the thought of keeping bees as a hobby. The land was covered in brush, with lots of thick, prickly berry bushes and the like. She looked into clearing the land, but most options included herbicides or pesticides. Jen knew for the health of her bees to come, she didn’t want to use either.

She kept looking for a better way. In online board discussions, people kept telling her to get a goat. Whether they were kidding or not, Jen took it to heart. Because in her heart, she knew that it would be the best thing to do for the earth.

She started looking for goats to borrow. There’s another sentence that doesn’t get uttered very often. But believe it or not, there are several goat farms near Buffalo, so Jen started calling them one by one to see if they’d be willing to lend her a goat or two to clear her land. They all thought she was crazy. Some even laughed and hung up on her!

She kept calling, until she called Kerry Planck, who owns Alpine Made, an organic Goat Farm in Wales, NY. Kerry crafts handmade raw organic goat milk soaps and skin care products. Kerry explained to Jen that because her farm is organic, she could not send her goats out to clear Jen’s land. You see, when a farm is certified organic, the animals have to eat organic too, and there could be no guarantees that Jen’s land was certified organic.

But instead of telling Jen she couldn’t help, Kerry invited her out to the farm for coffee. She suggested that if they brainstormed, they might be able to come up with a solution together. That first meeting would be the beginning of a beautiful friendship.

That day, Jen learned that on a normal goat dairy farm like Kerry’s, the males are only utilized for breeding. Often they are sold for meat as young calves. Likewise, when a female is past her milk producing years, they are quite often simply slaughtered. Well, Kerry wouldn’t do either because she loves animals. So she kept them.

Also that day, the idea for Let’s Goat Buffalo was born. Together, Kerry and Jen came up with a plan. Jen would buy the males, and the females who were past their prime. They thought that people in and around Buffalo would be interested in a goat grazing service, if you will. Another type of back to the future idea, in that the goats could clear both public and private land of invasive plants without the use of chemical herbicides and pesticides. It would be a social enterprise too, because Jen would be offering a natural, and incidentally, more effective alternative.

Kerry would board the goats when they aren’t working (separate from her organic goats) and act as a mentor to Jen.

Sounds simple, right? Well, not so much.

Getting Started – The Regs

There are regulations. Or, I should say, there are now. Because Jen pretty much had to search out what she needed from the city, the county and the state. And apparently, nobody knew how to classify the business, or what types of permits she would need, because this hasn’t ever been done before. Although she ran into more than a few brick walls, she persisted.

In the end, Let’s Goat Buffalo is classified as a farm because she participates in the sale, purchase and husbandry of animals. The business also has a landscaping license from the city of Buffalo.

She also had to figure out HOW to do it. Jen tells a funny story about the first time she transported the goats. They were in a trailer she was towing with her car. Keep in mind she had never towed a trailer before, let alone one with live animals inside! Luckily, she has enough faith in herself to handle tough situations, and the ability to laugh at herself when it’s appropriate!

She also had to learn all about goats, including extensive knowledge of a goat’s ruminant digestion system. How to feed them, and care for them too. She also fell in love with them. That much is obvious when you see her with the goats.

And it’s also quite obvious that Jen has had to become an expert in plants as well. You see, there are plants that will harm goats, even kill them. For example, cherry trees can be extremely dangerous to goats. She has learned how to identify plants, and how they reproduce, in order to know the best way to remove them, and ‘manage her job site’ so to speak.

Jen views this part of her job as getting back to her roots. Her family owned and operated Brookins Greenhouses, in Orchard Park. Jerry Brookins purchased an acre of land on the north side of East Quaker Road in 1889, and by 1897 he had a thriving flower business with extensive greenhouses covering much of the original property. The business and the property grew to include vegetables as well as flowers in nearly two acres of greenhouses, on over six acres of land surrounding the original acre. Read more about Brookins Greenhouses here.

Goats Will Eat Anything!

By the way, Jen’s given me the inside scoop on goats. They will not eat everything. Goats will not eat tin cans. They will, however, chew on your clothes, but their chewing is more like ‘gumming’. I know because one of Jen’s goats ‘chewed’ my glove before becoming uninterested, and the glove and my fingers were both unharmed. My glove wasn’t even wet! I have to say, that all of this surprised this city girl! Oh, and also, you cannot have goats mow your lawn for you, because they don’t really eat grass. Sorry guys!

So How Does All This Let’s Goat Buffalo Stuff Work?

Good question. Jen explained to me that it’s not as simple as just taking the goats to a site, and letting them go. She has to carefully inspect a site for plants that could harm the goats. Once a site is deemed safe, Jen utilizes what is called targeted competitive grazing. She puts up an external fence around the site to be cleared. She then puts up a smaller internal electric fence where the goats will eat. (Don’t worry, the goats are raised with the electric fences, they’re used to them and they avoid them.) As the goats eat, the fences get moved to another section of the site, and the eating continues. Goats love to eat and so this isn’t like work for them!

In targeted competitive grazing, a goat will naturally observe the food available to them, how many other goats are present, and they will figure out their share of the food. Then they will eat, and eat and eat. Then they’ll sit down and they’ll chew, and chew and chew, beginning the ruminant process. Their digestion process actually sterilizes the plants they eat, and leaves a natural fertilizer behind, feeding the soil and promoting regrowth of desired plants, before they leave a site. It’s a win win for everybody.

What’s Next for Jen and Her Goats?

Let’s Goat Buffalo jobs typically last from several days to two weeks. Moving them back and forth to Wales was very difficult, so she bought a bus! Oh, naturally! This is one of the things I love about Jen. She thinks outside the box. Gotta move goats? Buy an old school bus, of course! She’s in the process of converting a vintage school bus to use for moving the goats. It’s perfect, because she can also let the goats sleep inside it at night on site, and there is a sleep compartment for the herder as well. Take a look at this video. It’ll give you a really good idea of how she’ll use the bus once it’s ready. If you are so inclined, you can donate to the cause as well.

In addition, Jen tells me that she now has 12 goats, and expects to have two more by summer, depending on births at Alpine Made. One herd (six to seven goats) is booked through the 2020 season, and Jen is working on booking the other six to seven. She has finally been able to hire a full time herder for the 2020 season to help her so she can concentrate on bookings, other job sites, and the endless hours of work all small business owners do just to keep afloat.

What an interesting business! Jen is a delightful person who obviously loves what she is doing, and she absolutely adores goats. As I’ve said in other posts, it’s just incredible to see someone doing what they love, and what they are so obviously meant to be doing. Jen is one of those people.

And for starting the city’s first goat grazing service, Jen goes on my list of Women in Buffalo Making History. Not only for starting a business, but for creating a true social enterprise that offers a natural and effective alternative to the use of pesticides in nature, affecting real change in they way we view nature and how to live more naturally in harmony with it. Jen’s business has the potential to affect the health of people all over the area. Less pesticides means less illness, simple as that.

Meeting Jen and Kerry has been an absolute joy for me. These two get it. They understand the importance of helping each other succeed, and that the good of the community, the land, the people and the animals, has to come before profits. The profits will come, but not before these.

Next week I’ll bring you the remarkable story of Kerry Planck of Alpine Made, in Part Two of this story about two women and lots of goats.