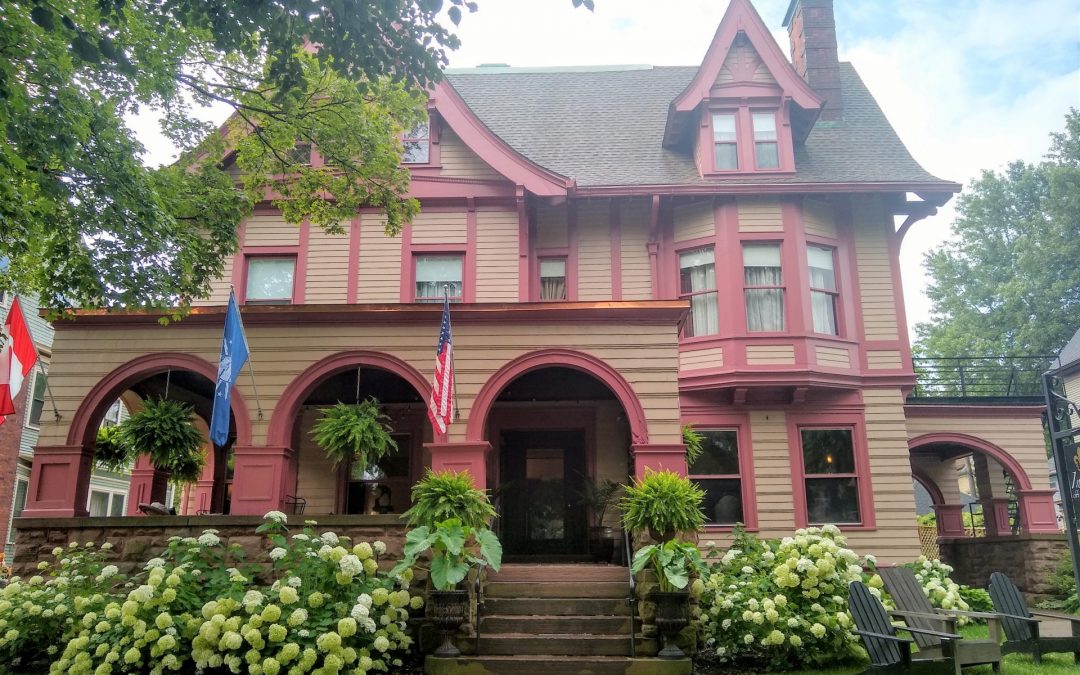 I’ve seen the Hewitt House (now Inn Buffalo Off Elmwood) many times over the years. It’s on Lafayette Ave between Delaware and Elmwood. Prime area. One of the most desirable streets in the city, in one of the best neighborhoods of the city. Low crime, friendly neighbors, beautiful homes. What’s not to love? I mean, the American Planning Association named the Elmwood Village one of the ten best neighborhoods in the country!

And why wouldn’t they? The Elmwood Village has Frederick Law Olmsted’s Parkway System, examples of both Frank Lloyd Wright and H.H. Richardson, and the Albright Knox Art Gallery. And let’s not forget the infamous (in Buffalo anyway) Elmwood Strip, where you can get just about anything you could possibly need or want from one of the 300 or so locally owned shops and eateries.

And the homes. Oh, the homes! About 76 of them on Lafayette, between Delaware and Elmwood! Holy smokes!

But for today, I’m going to concentrate on what I think was a hidden treasure in Buffalo, even back when it was built, in 1898. The Herbert H. Hewitt House at Number 619. If you’re a regular reader of my blog, you know that when I see a beautiful home, I always want to see what lies within. Today I’m doing just that. Upon entering, I was overwhelmed in the first two minutes! Seriously. What lies within this house completely blew me away!

Let’s talk about who had the home built. Herbert Hills Hewitt was born in Detroit in 1855. Like a lot of children did back then, he went to work at a very young age, in his case, for Michigan Central Station. He most likely started out working the most menial of jobs, but moved up the ladder a bit here, because by 1886 he had moved to Chicago and was the General Manager of the Pullman Company. Throughout his career, Hewitt was granted six patents, most of which had to do with railroads & railroad cars. This all means that he must have been a very talented man. To be able to invent useful mechanical devices, and be able to manage a major company is no small feat.

Hewitt married Sarah Dutro in 1892, and in 1893 the couple moved to Buffalo. Hewitt began work on the construction of, and later the management of, the Union Car Company, which was organized by several prominent businessmen, including John J. Albright.

Like most successful men of the day, Hewitt didn’t stop there. By 1904, he had founded and was the president of the Hewitt Rubber Company, which manufactured tires and other rubber supplies. He branched out into brass, founding the Buffalo Brass Company, and eventually became part of Magnus Metals Ltd., which Hewitt and his brother Charles managed. He was also instrumental in the founding and managing of several other companies as well.

And, he had a lot to say about the building of this house.

And What A Home!

The architects of 619 Lafayette were Lansing and Beierl, who were very well known local architects. Both worked for Green & Wicks before striking out on their own. Can’t think of better teachers for an architect starting out in Buffalo in the latter half of the 1800s, than E.B. Green and William Wicks.

Not only is the home incredibly beautiful, but for it’s time this home was probably the most innovative home in the city, if not the whole country. Dual lighting fixtures were installed in all the rooms, utilizing brand new, at the time, electricity with a gas backup just in case the electricity should fail. If you think about it, the electricity probably did fail quite often back then. Some of the fixtures still exist in the home. Love that.

It also had a central heating system installed, with at least nine separate thermostats! This was unheard of at the time. Pneumatic  heat control thermostat technology was only patented a few years before this home was built. I have not come across any other house in Buffalo that was equipped with this many thermostats. They are identical, and beautiful to boot.

Of particular interest to me was a room at the driveway side of the home, where delivery persons could enter and leave deliveries, without having to enter the locked home. Inside this little room was a small, custom Jewett refrigerator built into the wall. You see, my husband Tim worked for the Jewett Refrigerator Company when they were still in Buffalo. So whenever we see an old Jewett refrigerator, he likes to check it out to see how it was made. The room is now a first floor powder room.

Let’s Skip Ahead a Bit

In 1943 the home was converted into a boarding house by Flora Baird, wife of industrialist Frank Burkett Baird. He was best known as being one of the driving forces behind the conception, the planning and the building of the Peace Bridge. Frank died in 1939, so it appears that by 1943 his widow was looking for some additional income. With eleven bedrooms, this home is perfect for that. And it appears that at some point even those bedrooms were divided up into even more.

In 2012, Joseph and Ellen Lettieri purchased the home through public auction. They opened Inn Buffalo Off Elmwood in 2015.

But before they could do that, they faced a restoration that would intimidate the most experienced renovators! But also, what a labor of love! That’s how it comes across. I didn’t have the pleasure of meeting Ellen when I visited, but Joe is absolutely in love with this place. And like the Elmwood Village itself, what’s not to love?

Let me show you.

When I arrived there were a few guests on the porch enjoying a morning coffee and some breakfast. What a fantastic place to sit and fully wake up in the morning. You all know how I love a good porch. This one is probably the best I have ever seen! Can you see yourself here? Morning coffee or tea? Afternoon cocktails? Evening drinks? Yes, please.

I walked into the foyer, and almost immediately I was overwhelmed by the home. I didn’t know where to look first. There was so much gorgeousness all around me. I first shot off a quick text to Joe to alert him I was there. But then I was immediately drawn into the study. This room has been painstakingly restored to its original splendor. I don’t use the word splendor very often, but this is splendor. Take a look. It’s amazing! This is where the men would have gone after dinner to smoke cigars and discuss business. I could be comfortable here after dinner too. Just sayin.

On the other side of the foyer at the front of the house is the parlor. That’s silk damask on the walls. Just gorgeous. I can see Sarah and Herbert relaxing here in the evenings after dinner. Beautiful.

The music room – this is where the 100 year old tapestries are tacked to the walls. This is a first for me. So I looked it up and found that when the plaster is applied to the walls and is still wet, the tapestry is applied to the wet plaster and tacked in at the edges. This is how the silk damask would have been applied as well. You can see the tacks in the photo. Effective process, because this stuff is over 100 years old, and look at it! Might have faded a bit, but it’s still beautiful!

Joe restored the ceilings himself in this room, and he admits to mixed results. The whole thing was painted white over the beautiful stenciling. There oughta be a law.

Oh, and the Foyer

The sheer width of the foyer is so grand. Check out the mantle and the surrounding woodwork, and this is a great shot of those cove ceilings I mentioned earlier. I should mention that the Lettieris have found gold leaf under the white paint in both the foyer and the front parlor. This home is a preservation in progress. May take a lifetime to uncover all the hidden treasures here!

The stained glass in this house (starting to sound like a broken record) is among the best in Buffalo. Take a look for yourself.

And Last, But Certainly Not Least

The Rathskeller. And here I go again, this is one of the most unique rooms I’ve seen. I mean it! I’ve never seen anything like it. The tile work depicts small town life and is spectacular! And in such good shape considering that it’s over 100 years old! What a cool room!

Wait, maybe this is where the men retired to after dinner to smoke cigars and talk business…

Well! I don’t even know where to begin. Joe Lettieri has the perfect personality to run an inn. How many innkeepers do you know who receive gifts from their guests? There was a family leaving the inn on the morning I visited. Below, from left to right, are Josef, Amy, Daniel and Joe Lettieri (owner). The bottle in Joe’s hand was a gift to thank him for being such a great host.

Josef, by the way, is the artist of the new mural at 201 Ellicott Street. He and his family stayed at the inn while he was working on the mural. Glad to see you’ve enjoyed your stay here in Buffalo. It was great meeting you, and your mural will bring joy to downtown Buffalo for years to come. For that, we thank you, Josef.

Back to the House

This home was a real surprise to me. I’ve seen it many times passing by, but I never dreamed there would be so much inside the home that would fascinate me. The story here is how intact the place is, after all these years! And to be honest, the work that Joe and Ellen were willing to do to bring it back is nothing short of incredible. They’ve got a ways to go if they’re going to complete the entire house, but honestly, it’s stunning the way it is.

As Joe reminded me, he’s just a janitor. And the work that’s left to do would be best done by professional preservationists. I personally love the place just the way it is. I mean, I’m dying to see what’s under all that white paint, but there’s a lot to be said for enjoying the here and now. And that’s just what Joe and Ellen are doing. As a Buffalonian, I appreciate all that they’ve done for the city. When people come to stay with them, they make us look good.

This is a fascinating home, on a beautiful street, in a wonderful neighborhood! Got friends and family coming to visit? Take a look at Inn Buffalo Off Elmwood. You won’t believe what lies within!

*Special thanks to Rick Falkowski for hooking me up with Joe Lettieri. Appreciate it and looking forward to your new book!