Lumagination at the Botanical Gardens 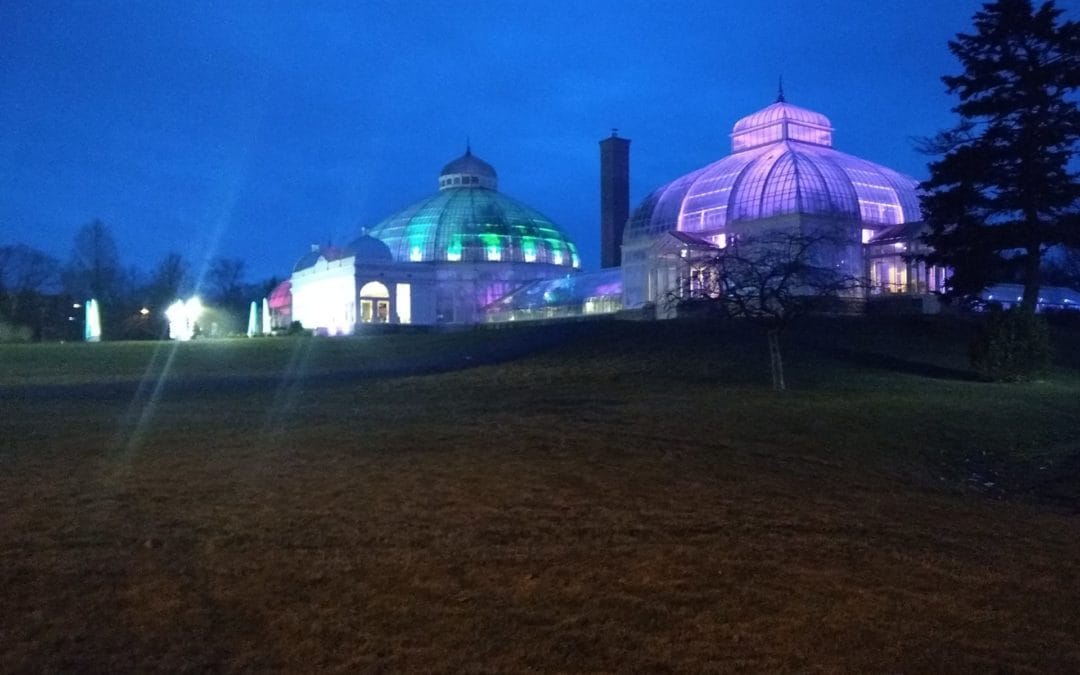 My parents quite often took us to the Buffalo and Erie County Botanical Gardens to see the spring blooms around Easter time. To this day when I smell spring flowers like lilies, daffodils or tulips, I am immediately transported to the Botanical Gardens. My father is a woodworker and taught us to look at the way things were made. No matter how grand or modest. So at the Gardens as kids, in addition to the amazing blooms, we were also in awe of the structure itself. That wood, steel and glass could come together to form something so beautiful still has me in awe to this day. I consider it a gift from my father to be able to appreciate a finely built structure.

Be A Tourist in Your Own City

You all know by now that one of my favorite things is being a tourist in my own city.  So when I saw that the Buffalo and Erie County Botanical Gardens was celebrating Lumagination again this year, I thought I’d better get over there and see it. You see, I haven’t yet and I’ve been wanting to for a couple of years now. Sometimes, even if you want to do something, you just can’t fit it in. Something something about the Rolling Stones and not always getting what you want…

This year, I decided to make it a priority. And, in the interest of doing this as a tourist, I did what I always do when I visit a place for the first time. I did a little bit of research, and here’s what I found. Some things I already knew, others were surprises. Read on.

The Botanical Gardens – A Brief History

The Erie County Botanical Gardens is housed in a finely built structure. It was designed by very prominent glass house architects Frederick Lord & William Burnham. It’s one of less than a dozen English style conservatories left in the country, and only one of two that is a tri-domed design. Opened in 1900, the South Park Conservatory (as it was first known) is the crown jewel of South Park. In addition to housing many species of tropical plants, it hosts seasonal displays as well, such as those spring blooms I mentioned earlier.

For more than fifteen years, the Botanical Gardens Society has operated the Gardens and maintained the extensive collection of plants. And I do mean extensive. I could show you a hundred photos, but you really have to see them to believe how many different plants there are in this building! I will, however, show you some of my favorites.

In preparing to write this, I headed over to the Botanical Gardens early to get some photos during daylight. I was able to walk right in the front door (I thought they were closed) and started snapping photos right away. Apparently, I am still in awe.

I must have gotten lost in my photo taking, because a man approached and informed me the Gardens were indeed closed. I explained that I had gotten caught up in the beauty of the place. He just smiled and said that it wasn’t a problem, but I should slowly make my way out. We chatted for a moment about the exhibit. I wasn’t in there long, I wasn’t hurting anything. The guy could see that, and was cool about it. This is Buffalo.

Lumagination at the Botanical Gardens

So, an hour or so later, after catching up with a couple of friends, we approached the building, which was now illuminated with color from the inside. I think I’m the only one of the three who wanted to stand outside and stare for a few minutes. I didn’t, because well, it was cold. This is Buffalo too. But I did manage to snap a couple of photos.

It was hero night at the Gardens, honoring veterans with free admission. Cool. One of my friends is among the heroes. We each were given a sticker to wear as our ‘ticket’. More about those later.

Lumagination is a fantastic exhibit. It’s is a four part series. Each year is represented by one of the four elements of the earth. Water, air, minerals and fire. This is year three of four, and so we were treated to minerals. And it was indeed a treat. Each room was more impressive than the one before! The lights were phenomenal! And the plants? Incredible. There were geodes, petrified wood, glass flowers, all minerals. And so much more! The photos I take with my phone can only give you a tiny idea of how beautiful it was in person.

Just cannot help but look up when you’re in the domed rooms! They’re spectacular!

Lumagination is extremely well done. It’s a great mix of technical skill and artistic flare. Definitely worth seeing. It’s on display until February 29 (we get an extra day this year!). I’m told that weeknights are the better days to go, as the weekends tend to be crowded.

Oh, and those stickers that were our ‘tickets’? Well, apparently it’s a thing to stick them to a road sign on the way out of the gardens. Public art? You decide.

If you can’t make it before the end of the month, there’s always spring blooms to see during April and May. And we all know those tend to cause lasting memories. The Gardens are open all year so, pick some of your favorite people and go make some memories. Be a tourist in your own city!

Thanks for putting up with all my photo taking ladies!