Our Lady of Victory Basilica & the Man Who Built It 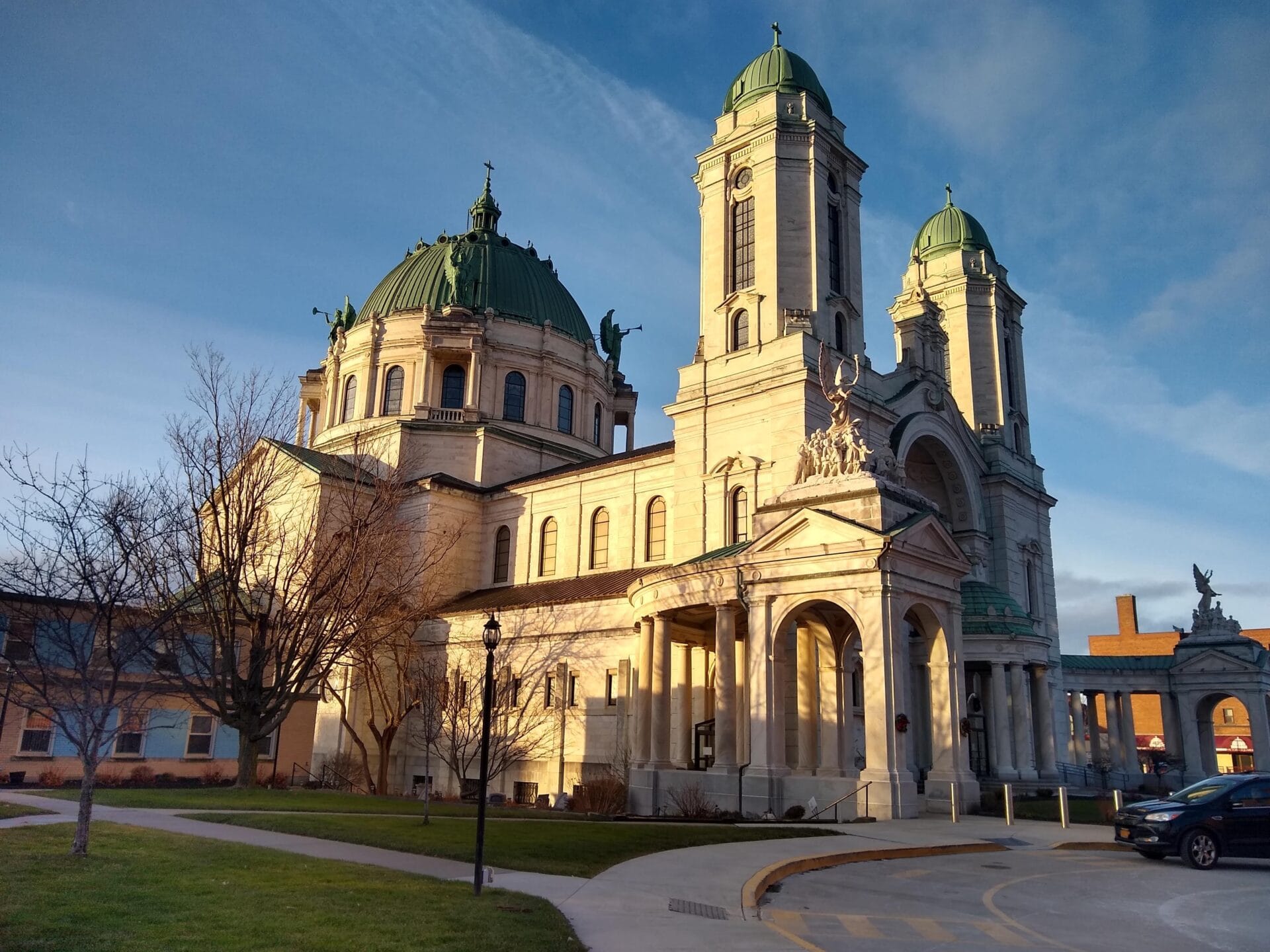 It’s the holidays, so I thought I’d write about one of Buffalo’s most notable churches, Our Lady of Victory Basilica. I’m writing on the suggestion of my husband, Tim. He’s been suggesting it for a while, and several months ago when I decided it was time to get organized with my schedule, I put the Basilica on for Christmas time. I thought it would be fitting to write about such magnificence during one of the happiest times of the Church calendar, the birth of Christ.

Let’s talk about the history and architecture of this building and the man who built it. It’s a big part of our city’s history.

As a Buffalonian, born and raised, I have been hearing about Father Nelson Baker my whole life. But who was he really? That’s a good question. So I did some reading, and he was a pretty interesting guy.

Nelson Baker was born in 1842, in the then growing city of Buffalo. He was one of four sons belonging to Lewis and Caroline Baker. He was baptized as a Lutheran at birth, the faith of his father. But for years Nelson attended daily mass with his mother, a ritual he very much enjoyed. At ten, he was baptized Catholic. That’s important, obviously.

His parents owned a grocery / general store downtown, and the family lived behind the store. Nelson completed high school and began working in the family business. He was good at it. He was smart, good with numbers, and enjoyed getting to know the customers.

When the Civil War broke out, Baker served in the 74th New York Regiment, with distinction.

After the war he went into the seed and grain business with a friend, and did very well for himself. At this time he was very generous with his time and money at a local Catholic orphanage in Limestone Hill (present day Lackawanna). The orphanage had a home for younger boys, and one for older boys on their campus, in addition to a parish church.

But something was nagging at him. He struggled to discern a priestly vocation. He made many excuses. Too old. Not educated enough.

Perhaps it was his business experience that frustrated him about this first assignment. Father Hines was no businessman. In fact, the orphanage and parish were deeply in debt. It had grown to $60,000. That’s a lot of money now, but back then it was astronomical.

Out of frustration, Father Baker asked for, and was granted a transfer. After just one year though, Father Hines passed away, and the Bishop summoned Father Baker back to Limestone Hill. There he would stay for the rest of his life.

Creditors were after him immediately. He tried asking for extensions, to no avail. Not knowing what else to do, he simply withdrew every last penny he himself had from his business days, and paid off the debt.

It was at this point that Baker’s business acumen came into play. This part of the story is important. He wrote letters to postmasters all over the country asking for the names of charitable Catholic women in their towns. (That certainly wouldn’t fly today!) He then started the Association of Our Lady of Victory, and wrote hundreds of letters to these women asking them to join the Association for twenty five cents a year, to benefit the boys in his care.

It worked! It wasn’t a lot of money (although some gave more) and so thousands across the country joined the Association. In effect, he was pioneering what we call today the direct mail fundraising campaign.

Life Gets In the Way

At this time, the idea for Our Lady of Victory Church was already in his mind, patterned after a church he had seen in Paris during his seminary days. But there were several other projects that took precedence. In addition to the many repairs and renovations to the two homes for boys on the property, there was the church to take care of, which at the time was called St. Patrick’s.

When Baker heard that young, unwed girls were tossing their babies into the Buffalo River in order to save them from a life of poverty, he was horrified. For the mothers as well as the babies! He opened an Infant Home, which was to become a sanctuary for unwed mothers and their babies. Everyone was welcomed, no questions asked.

Baker spent what some considered too much money drilling on the land for natural gas. It took longer than normal, but they found it, and it was enough to heat all the buildings on the site, and roughly 50 homes that were close by. It is still being used today.

The Association continued to grow through it all. And so did the parish. The congregation outgrew the current church, St. Patrick’s, but everytime Father Baker thought he could begin, another emergency would come up and delay his plans.

In 1916 St. Patrick’s Church suffered a fire and there was extensive damage. Many suggested rebuilding immediately. Father Baker ordered repairs done but didn’t initiate a new church. He waited until he thought the time was right.

Finally, in 1921, at a regularly scheduled church meeting, he announced to stunned church members his intentions to build a new church. He outlined his plan to build a large shrine to his patroness, Our Lady of Victory. He promised to complete the church with no debt, and he kept his word.

Our Lady of Victory is Built

Father Baker engaged a renowned architect, Emile Uhlrich for the design, and a local contractor to do the work. He spelled out plans to use only the finest materials and craftsmen to build a church fitting of his patroness. He hired only the most talented artists in the world to complete the work. Professor Gonippo Raggi, from Italy, and Marion Rzeznik (a Polish born Buffalonian) created the beautiful oil paintings throughout the church, depicting Mary’s life. Otto Andrle, a well known Buffalo artist, created the incredible stained glass throughout the church.

The Best of Materials

Forty-six different marbles were used. The pews are made of very rare African Mahogany. The artwork is exquisite. The stations of the cross were carved by the Italian artist Pepini, and it took him fourteen years to complete the project. The great dome depicting both the Assumption and the Coronation of Mary was the second largest in the country when it was built. The first being the Capitol Building in Washington D.C. There are angels everywhere inside and outside the basilica. It is estimated that there are as many as 2,500! Wow! There are four swirled red marble columns surrounding the Our Lady of Victory statue on the main altar.

Baker spent approximately $3.5 million – but with no debt at completion. He enlisted the help of the Our Lady of Victory Association, which now numbered in the tens of thousands. He ‘sold’ marble blocks for $10 each.

Each and every contributor’s name is listed in a book that was placed under the statue of Our Lady of Victory on the main altar. No matter how much or how little they donated.

The finished church is nothing short of magnificent! Just months after completion, the church was named a Minor Basilica by Pope Pius XI. Father Baker’s greatest dream was realized, his gift to Mary had been made.

Incidentally, OLV was only the second church in the country to be named a basilica at the time. The first was St. Adalbert’s Basilica right here in Buffalo, in 1907. Cool, Buffalo!

Because this church is designated as a basilica, it always stands ready to receive the Pope. Up near the main altar, pictured below, are a tintinnabulum (left), and a canopeum (right). The tintinnabulum is a bell mounted on a pole with a gold frame. It is to be used in any processions the Pope may take part in. And the canopeum serves to symbolically protect the Pope and remains halfway open awaiting the Pope’s arrival. Interesting!

The End of an Era

Father Nelson Baker passed away on July 26, 1936. His Cause for Canonization was approved in 1987. His body was moved from Holy Cross Cemetery and placed in a tomb inside the basilica, at the Grotto Shrine to Our Lady of Lourdes in 1998. By all accounts, Father Nelson Baker was a humble, quiet man who did great things in a humble, quiet way. The faithful of Lackawanna await his approval for canonization.

To call Our Lady of Victory Basilica impressive is an understatement. It couldn’t be more impressive! I only wish the lights had been fully on in the church when I was there so that my photos could give you a true feel of the place.

Most Buffalonians at least have heard of Father Baker. How many children back in the day were coerced into behaving with the threat of being dropped off “at Father Baker’s”? A lot I would guess. I know my brothers were. But it was good to get to know this whole story. Sometimes these ‘legends’ become so big in our minds that we forget they were people. People who lived, loved and accomplished great things. And in this case, Father Baker did it humbly, and without fanfare. At least not during his lifetime.

The Millions Spent on Our Lady Of Victory

Our Lady of Victory Basilica in Lackawanna stands as a testament to Father Baker’s faith in God, and his devotion to the Blessed Mother. And while it may be difficult for us to understand the expenditure of millions of dollars on a building when there are poor people who are in need of the basics, (this is something that I struggle with), it was pointed out to me this week, that it’s easy to think that way today. We already have so many treasured buildings of worship.

And back in the day, people equated sacrificing in order to give, as having true faith in God. And building great churches was seen as a magnificent sacrifice, or offering, if you will, to God. Back then, they felt it would please God to create something so grand in honor of him. If this is the case, then Father Nelson Baker certainly pleased his God, and his patroness, Our Lady of Victory, because this church is unparalleled in Buffalo, and I daresay the country.

I’ve seen OLV a thousand times, but every time I approach, it takes my breath away. It’s awe inspiring. I actually find it difficult to choose the right words to describe it. It’s one of those places that you have to see for yourself. Photos don’t do it justice. Especially mine. Either way, if you haven’t at least seen this church from the outside, make it a point to get over there and check it out. You’ll be glad you did.

I wish you good health, happiness and peace this holiday season and in the coming year!