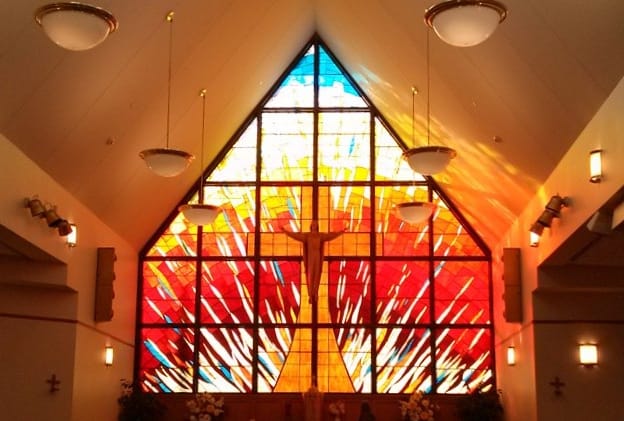 Welcome to the first of seven “church visits” in my series about the Holy Thursday Tradition of Visiting Seven Churches. If you missed my introduction post explaining all about the tradition and my interest in it, you can access it here.

I’ve chosen to bring you Ss. Columba-Brigid Church first, because Fr. Jud (pastor) was so involved in the Holy Roll, which is the tradition of the seven churches, on bikes. The story behind Ss. Columba-Brigid Parish is a long, and complicated one. Please bear with me.

St. Columba’s Parish was established to serve the heavily populated area between St. Joseph’s Cathedral on Franklin Street and St. Patrick’s Church on Emslie Street.  The first mass was celebrated January 28, 1888, in a chapel that was set up in a tenement building at 354 Seneca Street (east of Chef’s Restaurant, on the other side of the street).

Construction was begun on a new church at South Division at Hickory Street. When the basement was complete, the masses were moved there, but the parish realized that the planned church would not be large enough.  So they shifted gears and in June of 1891 they laid the cornerstone for an unadorned Romanesque church at the corner of Hickory and Eagle. It was dedicated in February, 1892.

St. Columba’s was well known for holding “printer’s masses” along with their regularly scheduled masses. It took place at 1:30am Sunday mornings and was for the newspaper workers who worked late Saturday nights to get the Sunday edition out early. This went on from 1925 through 1971. Cool. I’ve heard of this but never knew which church did it.

The neighborhood at the time St. Columba’s was built was predominantly Irish, but changed over the years with an influx of Italian immigrants, and in the 1950’s the area became more Hispanic.

St. Lucy’s parish, which was located at the corner of Swan and Chicago Streets (literally around the corner from St. Columba) merged with St. Columba’s in 1960, and the combined church was strengthened by the Black and Hispanic population. A Spanish mass was added to the schedule at this time.

The original St. Brigid’s was a wood structure, built in 1850 at the corner of Louisiana and Fulton in the Old First Ward. The building didn’t last long and in 1859 a new church was in the process of being built when a hurricane hit. The storm blew the roof off and badly damaged the walls. The parish community persevered however, and the new church was dedicated in 1860, with stained glass windows to follow a few years later. Fast forward a hundred years or so and believe it or not, in 1968 St. Brigid’s was badly damaged in a fire, and was razed in 1969. Mass was celebrated from a chapel in the school building from then on.

St. Columba and St. Brigid’s merged in 1987. So, Ss. Columba-Brigid is really a coming together of three parish communities. Four, if you count St. Ann’s that was located on Broadway. When parishioners there were told their church was closing in 2007, they fought to keep it open. But in 2012, they were forced to close their doors. It is unclear how many of their congregants ended up at Ss. Columba-Brigid.

Now, you’re not going to believe this, but in 2004 a lighted prayer candle fell to the floor of Ss. Columba-Brigid’s and the church burned. This was the unadorned Romanesque stye church built in 1892. Luckily, no one was in the church at the time, so no one was hurt, but the building was a total loss.

The pastor at the time, Fr. Roy Herberger worked along with Sr. Karen Klimczak, SSJ, to plan for a new church building. Tragedy struck again on Good Friday, 2006, when Sr. Karen was murdered in Bissonette House, a home for men who were recently released from prison. The church members, in commemoration of Sister Karen’s forgiving nature, moved ahead with the construction of the new church and it opened later that same year. A memorial “Peace Garden” in Sister Karen’s honor is next to the entrance to the church.

“Welcome to our neighborhood, multicultural community church. Here you’ll find a community that has come together from many veins of Buffalo past, and is forging a future that combines those legacies with the evolving hearts of greater Buffalo, New York.”

Says it all in just two sentences.

When I’m in this church, I feel a real sense of community. Sometimes you just know. The people here know each other. Like they would help each other in a crisis. Sort of like what we’re going through right now. Maybe it has something to do with their past, and all that took place to bring them together today. In a real parish community. Pretty sure that’s what they’re going for.

I hope you are enjoying these posts, and I sincerely hope that you are all well in mind, body and soul. Peace be with all of you.

Introduction to the Tradition of Seven Churches