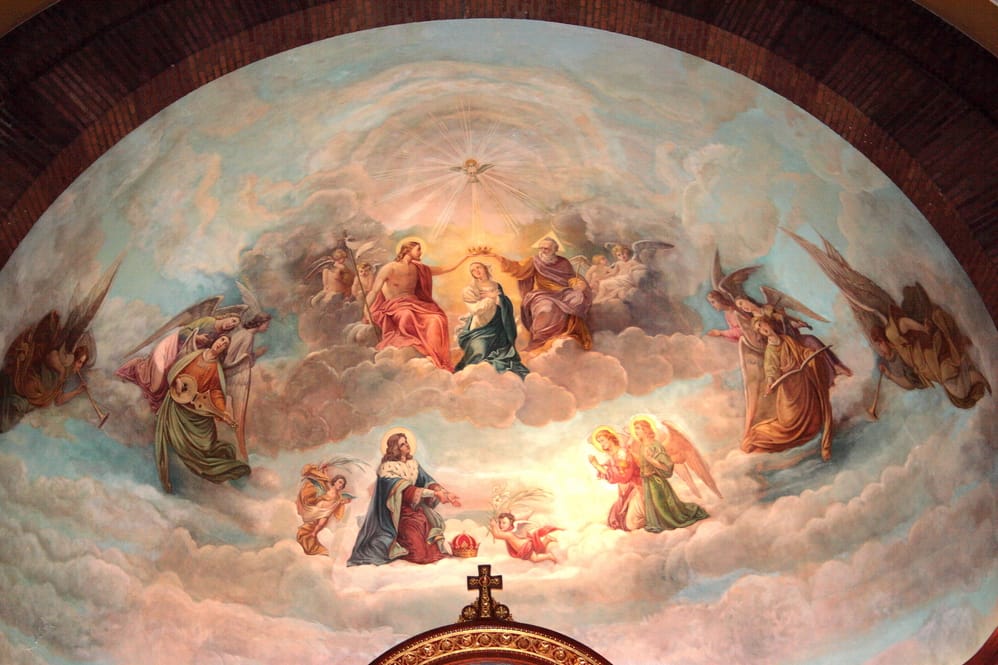 Welcome to the fifth of seven “church visits” in my series about the Holy Thursday Tradition of Visiting Seven Churches. If you missed my introduction post explaining all about the tradition and my interest in it, you can access it here. I’ll list the links to the individual church posts at the end of this article.

So, today we are ‘visiting’ St. Casimir Church in Kaisertown. Not really considered Old Polonia, but very Polish nonetheless.

The history at St. Casimir is unique when compared to the churches we’ve ‘visited’ so far.

As discussed in our other visits the late 1800’s brought an onslaught of European immigrants to Buffalo. The number of Polish immigrants increased significantly with the opening of St. Stanislaus Parish in 1873. But as we talked about in more than one of these posts, St. Stan’s grew so fast that by the 1880’s, more churches were needed to accommodate the growing population on Buffalo’s East Side.

Polish immigrants were also settling east of ‘Old Polonia’ because they found work further outside the crowded area most of Buffalo’s Polish were living. A group of Catholic Poles who found work just east of the Clinton/Bailey area, and who lived in the vicinity of Cable and Casimir Streets, petitioned to then bishop Stephen Ryan for the formation of a new Polish Church for Buffalo. There were roughly forty families representing just over 250 people involved at the very beginning. This was in the mid-1880’s.

These families appear to have planned very well for the needs of their new parish. From the start, they came together to see to all the needs of new immigrant families in the area. They understood the need for basic food, shelter and clothing, but they also understood that spiritual needs must be met in order to live peacefully together. Hence, their petition.

Instead of giving permission to form a new parish immediately, Bishop Ryan sent a series of priests to come on Sundays to provide weekly masses for the faithful, and emergency services in a crisis. I would imagine that would have included administering last rites, funeral masses and support during such events. Some of the priests who rotated Sundays with this congregation are familiar to this series, Fr. John Pitass of St. Stanislaus and Fr. Thomas Flaczek of both St. Adalbert’s and St. John Kanty parishes.

I found this response to be interesting. Maybe the initial 40 families weren’t enough? Maybe the diocese felt unsure about the area this group settled? I mean, at a time where churches seemed to be popping up on every third or fourth block, why the hesitation? We may never know.

But here’s something even more interesting. The congregation, by all accounts only expressed gratitude to the bishop at that time. Of course, it’s entirely possible that they knew something that we don’t.

In 1890, Bishop Ryan assigned Rev. Rajmund Wieder to help form the parish. The congregants worked well with Fr. Wieder to build a combination church/school/parish hall. It was affectionately referred to as “Noah’s Ark” because of it’s general appearance. The land for the building was donated by Buffalo City Judge Daniel Kenefick. It stood at the corner of Casimir and Weimar Streets.

Noah’s Ark, aka St. Casimir’s Church, was dedicated in November of 1890. Fr. Wieder was transferred in 1891, and a succession of temporary pastors took his place for the next several years. In the meantime, the parish grew exponentially.

In 1900, Rev. Francis Kasprzak arrived at St. Casimir’s as the new pastor. His youth and enthusiasm was catchy and the parishioners embraced the next ten years under his leadership, during which many good things happened for the parish. Fr. Kasprzak oversaw the extension of the church building to accommodate the now 1200 parishioners, about 250 families, and also the building of a residence for the priests. The diocese noticed the growth and sent an associate priest to the parish around 1903.

The school had grown to 93 students and it was Fr. Kasprzak who brought in the Felician Sisters to teach in the school. The Sisters commuted from the motherhouse until the new rectory was completed in 1905, when the first priest’s residence was converted to a convent for the Sisters.

With the parishioner count increasing all the time, Fr. Kasprzak turned his attention to the construction of a new combination building, to house a church on the first floor, a school on the second and a church hall on the third. The building was dedicated in November 1908.

After 11 years at St. Casimir’s, Fr. Kasprzak was transferred to another parish within the diocese. His spirit of enthusiasm lived on and St. Casimir Parish continued to flourish long after he left.

In 1915, the bishop appointed Rev. Anthony Majewski to the parish. He would stay at St. Casimir’s for 40 years.

The first thing Fr. Majewski did was contact the right people with the city and ensured the paving of Weimar, Cable and Casimir Streets so that the parishioners had easy access to all of the parish buildings. He also had the old church building partially removed because it had seen better days; sold the wood from it to parishioners, making enough money to renovate the rest of the structure into four additional classrooms for the school.

Fr. Majewski then embarked upon a parish beautification project. He had the grounds landscaped, put in gardens and sidewalks and had dead trees removed, giving the children of the parish a place to play. Once the beautification project was completed, he tackled the much needed repairs of the parish school, painting of the interior of both the school and the church, and had sewers installed. Fr. Majewski also started a church/school library and instituted Regents Exams for the school.

The school itself continued to grow, and part of the parish hall was utilized to add more classrooms. In 1924 a new convent was built to accommodate the now 20 Felician Sisters who lived at the parish and taught at the school.

At this point Fr. Majewski again had the streets in the area improved, including having the original three repaved. He was also instrumental in instituting the flood control program for the Buffalo River, where several children had drowned.

The diocese took notice of all of this growth. In 1926, they suggested to Fr. Majewski that he look into building a permanent church for the parish. Having traveled to both Poland and the near east, Fr. Majewski already knew he wanted something that Buffalo had never seen before. He worked with Joseph Fronczak, a young associate with the Chester Oakley architectural firm, to come up with the design for the building we now know as St. Casimir Church. The use of color on the terra cotta on the exterior is spectacular! The interior is even more exquisite!

The new church was dedicated in May 1929. Even the depression didn’t deter the parishioners in their quest to complete the church and a new modern school as well. It’s kind of amazing that at that point in our nations history, that this local church was able to accomplish so much.

Certainly one of the highlights of St. Casimir’s history was the visit of Karol Cardinal Wojtyla, at the time archbishop of Kraków, Poland. He traveled with other bishops to the bicentennial Eucharistic Congress in Philidelphia in 1976. They then toured several Polonia centers in the US and Canada. He presided over two solemn masses at St. Casimir’s and stayed in the rectory while in town. To show his gratitude, Cardinal Wojtyla gifted the parish with an authentic oil painting of the crowned Black Madonna. He of course went on to become Pope John Paul II and eventually St. John Paul.

In 2011, St. Casimir’s was named an oratory and the parishioners were to merge with Our Lady of Czestochowa Parish in Cheektowaga. Fr. Czeslaw Krysa became the rector at that time. Through his work at the parish, one year later the status was changed to a church of particular use, providing for the care of the faithful, particularly those of Polish descent. This is a new one on me. A church of particular use means that an ecclesiastical community that will protect certain traditions of a church. I believe in this case, that means Polish Catholic Traditions.

When you have time, take a look at the St. Casimir Blog. It is obvious that they are keeping the Polish Catholic traditions alive!

The first time I went to St. Casimir Church was one of those Lenten ‘mass mobs’ I mentioned in the Introduction to this series. It was on Palm Sunday. I was awestruck by the interior of the church. If you read my blog regularly, you know that occasionally I see something that instantly transforms me into a tourist in my own city. The interior of St. Casimir’s is definitely one of those places. It’s uncommon though, that it became such a spiritual experience for me.

The air was thick with incense. The procession of palms was long and exuberant. The priest at the end of the procession was smiling and laughing with congregants. I think he tapped his huge palm leaves on every single child in the church before the procession ended! I’ve only been completely swept away at mass a handful of times in my life. But this was one of those times. The mass was just under two hours and I didn’t even realize it until the end.

I walked out of there that Palm Sunday, ready to move to Kaisertown and register at St. Casimir.

But alas, my husband loves our house and I kind of like him, so we stayed put. But I will never forget St. Casimir. This series of ‘church visits’ has renewed my desire to visit other churches more regularly. When this crisis is over that is.

St. Casimir’s Parish is located at 160 Cable Street in Kaisertown. Visit their website for mass times. This is the church we visited when we found Lucky’s on Clinton. Been going there ever since. As a matter of fact, it’s how I’ll get my husband to go to mass at Casimir’s soon. 😉

Join me tomorrow when we will be moving a couple of miles north to ‘visit’ St. Luke’s Mission of Mercy.