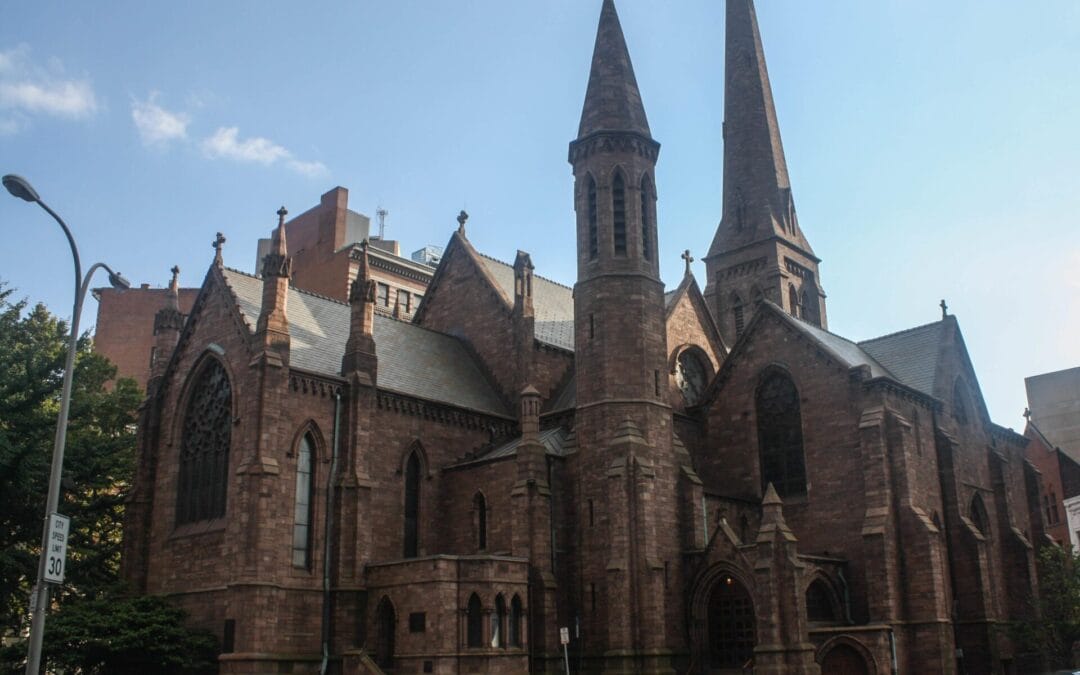 This week, I’ve decided to write about St. Paul’s Episcopal Cathedral. In my opinion, it’s one of the most beautiful churches in Buffalo. It’s been here a long, long time, since 1851, and it is a true Buffalo treasure.

The congregation of St. Paul’s Episcopal incorporated as a church in 1817 and it’s the second oldest religious congregation in the city. First Presbyterian was the first (1812) and interestingly enough, St. Paul’s founders were First Pres congregants. It’s not that they were unhappy where they were, but there was nowhere else for these early Episcopalians to worship but with the Presbyterian church.

After incorporating, the first couple of years were lean. Lacking funds, St. Paul’s congregation worshiped in various spaces in the city, including taverns. They eventually appealed to the Holland Land Company, who donated the land the church still sits on today. It just so happened that the plot of land was right across the street from First Pres. The first structure built was a wooden church, completed in 1819. As the congregation grew, they added on to that original church twice.

The Reverend William Shelton came to St. Paul’s in 1829, and he would stay until 1881. Impressive, especially since he almost didn’t stay in Buffalo at all. You see, Shelton passed through Buffalo in 1827 on his way to Canada. The congregation asked him to stay on at St. Paul’s. Shelton refused and went on his way. Two years later, they extended the invitation again. This time, Shelton agreed and he came to Buffalo to stay.

Shelton was an imposing figure in early Buffalo. He took great interest in all that went on here. He kept St. Paul’s focused on its mission of helping the poor among us. He was also very popular. So popular in fact, that people referred to the area around the church as Shelton Square. In true Buffalo form, the name stuck and lasted until the 1970s.

Shelton also presided over the building of the permanent church we know today. Let’s get into that now.

The building of the Erie Canal began in 1817, the same year St. Paul’s congregation was started. In 1819, the first wooden structure of St. Paul’s was built. It was consecrated in 1821. The Erie Canal opened in 1825, with its terminus here in Buffalo. After that, Buffalo grew by leaps and bounds. So did St. Paul’s.

Well known architect Richard Upjohn was engaged to design St. Paul’s. Upjohn was perhaps the greatest Gothic church designer in America at the time. He’s best remembered for designing Trinity Church in New York City. But I’ve read that he considered St. Paul’s Episcopal his best work. Of course, here in Buffalo, we agree with that notion.

Built on a triangular piece of property, no matter what side of the building you look at, it looks as though you’re seeing the front of the building, or the main entrance if you will. The style is English Gothic, evidenced by its pointed arches, lancet windows (tall, narrow, pointed at the top), and asymmetrical design. The spires show English influence as well. If you compare St. Joseph’s Cathedral (which is just around the block) you can see the clear difference between its French Gothic design and the English Gothic style of St. Paul’s.

Here’s an interesting little tidbit. St. Paul’s holds the only flying buttress in the city of Buffalo. It’s above the main entrance on Pearl Street.

St. Paul’s is built of Red Medina sandstone, from a quarry purchased by the congregation for a mere $272. The quarry was some 40 miles northeast of the city, in a small town called Medina. The stone was cut and sent to the site via the Erie Canal, making it a very economical option. Construction began in 1849; the church was consecrated in 1851. But the spires weren’t completed until 1870.

As we’ve talked about in many other blog posts, Buffalo has experienced the tragedy of fire on many, many occasions. Unfortunately, St. Paul’s was not able to escape that fate.

In 1888 a gas explosion in the basement of the church took place. The roof and the entire inside of the building were destroyed by the ensuing fire. But the red Medina sandstone walls stood strong. The congregation decided that very day to rebuild.

Richard Upjohn, having passed in 1878, was not an option for the re-design. The church engaged Robert Gibson, who was also known for his English Gothic church designs. He, for the most part, worked off of Upjohn’s design but did change a few things.

The roof was changed to include the hammer-beam ceiling, and the clerestory windows (which are beautiful!). Gibson also added transept like extensions on the sides. Transepts are the extensions on either side of altars that give some churches their cross-shaped floor plan. In this case, the extensions are not quite full, meaning they don’t project out enough to give the full cruciform shape. The whole effect of the changes gives the appearance of a tall, wide-open space. It’s gorgeous.

Off to the left as you face the altar, is a Tiffany stained glass window depicting ‘Christ on His Way to Emmaus’. It’s absolutely stunning.

To the right of the altar there is a painting by Jan Pollack, ‘The Adoration of the Magi’, that dates to the 15th century. Spectacular. It’s been said that this is one of the most valuable works of art in the city. And here it is out on display for all to see in a public building. Love it.

In Cathedral Park, just outside the church, is a sculpture entitled ‘Homeless Jesus’. It was placed in 2015, and to me, it embodies exactly what St. Paul’s congregation stands for, and indeed Buffalo as a whole as well. The sculpture was offered to many cities around the world (I believe there were 12 available altogether) and was turned down by a lot of them because it is (still) considered controversial. Some people view it as blasphemy to depict Jesus as a homeless man. Others believe that all people, even the homeless and downtrodden, when encountered, should be greeted as if you were greeting Jesus Christ himself.

Suffice it to say that St. Paul’s accepted, no, they embraced the sculpture. Taking care of the homeless and people in need has been part of their mission all along.

Well, in true Buffalo form, people started leaving articles of clothing on the statue for their needy neighbors. Instead of being annoyed, St. Paul’s gathered the items up each day and donated them to people in need. At one point, they also added a sign to the sculpture stating, “Take what you need.” And people do. I’ve also noticed that people don’t take more than what they need. That’s Buffalo.

They say a church is really the people, not the building. I’m not a member of St. Paul’s church, but I worked in close proximity for many years. I’ve admired it from the outside as well as the inside. I’ve spent time in Cathedral Park, eating lunch with friends, or just reading a book alone. It’s where I’ve witnessed people not taking more than they need from the Homeless Jesus sculpture. It’s a very peaceful spot.

So too is the inside of the church. On occasion, I’ve gone in to just sit and take in the peace. I guess I’ve always found churches to be peaceful, quiet places to think, or just be. And being so close to St. Paul’s for so many years made it a perfect place to just go in and get away from the stresses of the day for a few minutes.

Whenever I’ve encountered a parishioner, which has been quite a few times, I’ve always experienced kindness and friendliness. I’ll share just one of those encounters.

Once I was inside with some friends from out of town. We were admiring the “Adoration of the Magi” painting. A woman approached and simply said, “Hello.” We said hello back, and she smiled and invited us to stay for their service which, she said, was due to start in 5 minutes’ time. We politely declined, but understood it was her kind way of telling us there was a service beginning and that if we didn’t want to stay for it, we’d better hit the road! Haha. She was so sweet about it!

In 2017, the congregation of St. Paul’s celebrated its bicentennial year as an incorporated church. I love that they celebrated it with a street party that was free for all to attend, closing off Pearl Street between Swan and Church Streets. They gave tours of the historic church. They held a chicken bbq, the proceeds of which went to fund Hurricanes Harvey & Irma relief. I love it. They could have easily turned their bicentennial into a giant fundraiser for themselves, but instead chose to include everyone, and charge a nominal fee ($10) for a great meal, and donated the proceeds to charity.

That, to me, is what a church should be.

Next time you’re in the area, take a second look at St. Paul’s Episcopal Cathedral. If you can, go inside and feel the peace.