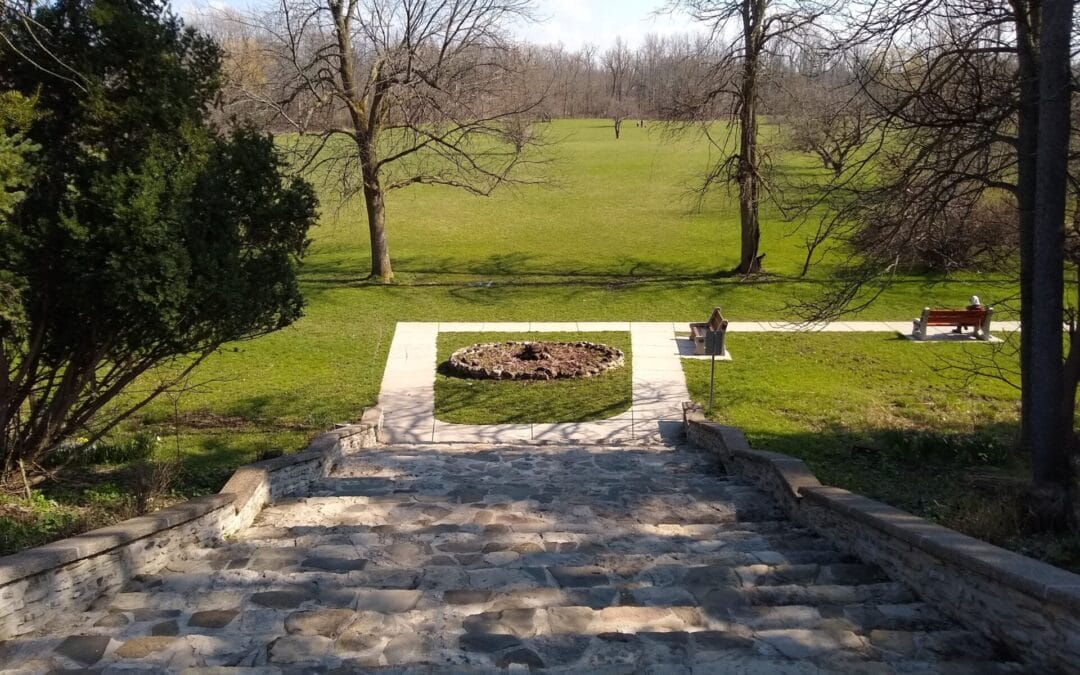 Several years back now, my parents were looking in to senior housing. There were some new builds going up adjacent to Amherst State Park that they went to take a look at. A few days later my Mother and I were going somewhere, and we made a slight detour to drive through the parking lot just so I could see the place. They had already decided they didn’t want to move there, but I was (of course) curious anyway.

When we pulled into the lot, I said, “What is this place?” My Mom explained that the new, and at the time, incomplete buildings off to the right hand side, were what they had looked into. But the other, older building straight ahead is what I was interested in. She went on to say that that building used to be the Motherhouse for the Sisters of St. Francis. But that now there was a state park on most of the grounds of the convent.

A state park? What? In Amherst? Just a stone’s throw from Main Street in Williamsville? Yep.

Best kept secret, ever. At least to me.

It’s been a long time coming, but I finally made it over to the park several weeks ago for one of our quarantine hikes. Great decision, it’s a sweet find.

St. Mary of the Angels Convent

My fascination with old buildings immediately drew me to the old convent. Of which I had already done a little bit of research.

I learned that it’s Gothic Revival style is pretty common among convents, and was designed by Deitel and Wade. The same architects who designed our own city hall. At around the same time too – 1928 for this building. 1929 – 32 for City Hall. This building is impressive.

Most of the Franciscan Sisters who lived here were involved in health care and education throughout Western New York. They ministered at such institutions as Mount St. Mary’s Hospital in Niagara Falls, local colleges, high schools and grammar schools. Including my own grammar school.

Nuns have always been the butt of many jokes told by people of all walks of life. And maybe I was at the right age for this, but the sisters who taught me were mostly very nice, and at times sweet ladies. Of course there were one or two that stood out for being ‘mean’, but there are also one or two lay teachers who stand out for the same reason. In my 30’s I had occasion to work with some Felician Sisters, and it was then that I realized for the first time, that sisters are people. (!) They each have their own personality. Some are gossipy, some are pious, some are funny, some are quiet etc. Just people though, trying to get through life just like the rest of us.

Anyway, what a beautiful contemplative place this must have been for them to retreat to, once the rigors of work brought them home in the evenings.

Roughly 80 acres of the convent land was put up for sale in 1999. New York State and the Town of Amherst acquired the property after splitting the $5 million price tag, in 2000. The agreement states that the town maintain the property which is to be used for conservation and passive recreation only.

And that is exactly how it is being used.

The old convent building is now St. Mary’s Apartments for seniors 55 and over. Very affordable if you look them up. The apartments themselves appear small, but nice. Just think of the yard though! And you wouldn’t have to maintain any of it!

The Park that Brings on Daydreams

While hiking around the park, we came upon a set of old stone stairs. As I walked up them, I had a very clear memory of being of being here, many years ago. My grammar school class had a field trip in what used to be the convent orchard. A couple of us stole away, and when we saw some stairs, we snuck up them. The building we saw at the top was like nothing any of us had ever seen before! We stood at the top of the steps just staring at what we were sure had to be a castle! Are kids still this easily impressed nowadays?

The old orchards are evident in the still existing (apple?) trees. Ellicott Creek ambles in curving paths through the property, bringing peace as it rolls by. Water does that to us, brings peace. There are wooded areas, nature paths, and a bike path too. There are secluded areas, and wide open meadows, and even a pine forest! If this place is not the stuff of daydreams, I don’t know what is!

Graffiti Art and The Cemetery

Bet you’re not used to seeing graffiti art and cemetery used in the same sentence.

Well, while taking a bike ride on another occasion, we took the bike path to the south end of the land. There were some ruins of what appear to be outbuildings for the convent. Now, they are mostly covered in graffiti art, and no one is removing it. Love this.

But when we reached the end of the path, and indeed the property, we noticed a cool looking little chapel in the middle of a field. We, like the little kids who found those stairs years ago, kept going.

Well, it wasn’t a field. It was a cemetery. Specifically, Gethsemane Cemetery, and it appears to be for the sisters who lived and served the community here. The Sisters of St. Francis. I have to admit, it’s a beautiful, serene resting place. And just a stone’s throw to Main Street in Williamsville.

There are still Sisters on the property where we found the cemetery. And they are still serving our community in health care and education. How do I know? We ran into one of them out for an evening walk while I was taking photos of the chapel. She told us she didn’t know the age of the chapel, but she thought it was almost as old as the convent itself. It’s a beautiful little chapel.

My Impressions of Amherst State Park

We all know Glen Park. That gorgeous little park on Main Street in Williamsville with the waterfall. If you go to the parking lot on the other side of Glen Avenue, and follow the creek to the north, you’ll end up in Amherst State Park.

Come to think of it, some college friends and I used to go to that very parking lot on beautiful spring days, take off our shoes and walk the creek for what seemed like miles. It’s not miles to the state park, so I suppose we were on convent land at the time. Hmmm. Good thing the nuns didn’t know what we were up to… 😉 Or maybe they did, and just let us be. Who knows?

Anyway, Amherst State Park gives me a good feeling. It’s there for conservation and passive recreation. But really, in my book it’s for walking, hiking, biking, and for getting away from it all. It’s a real retreat from the day to day life right now. And let’s face it, we could all use a break right about now.

The main entrance is on the west side of Mill Street, about halfway between Glen Avenue and Sheridan Drive. If you haven’t been to the park, you should think about getting there this summer. It’s not crowded like a lot of our parks have been this summer. I hope you find it to be as peaceful as I do.