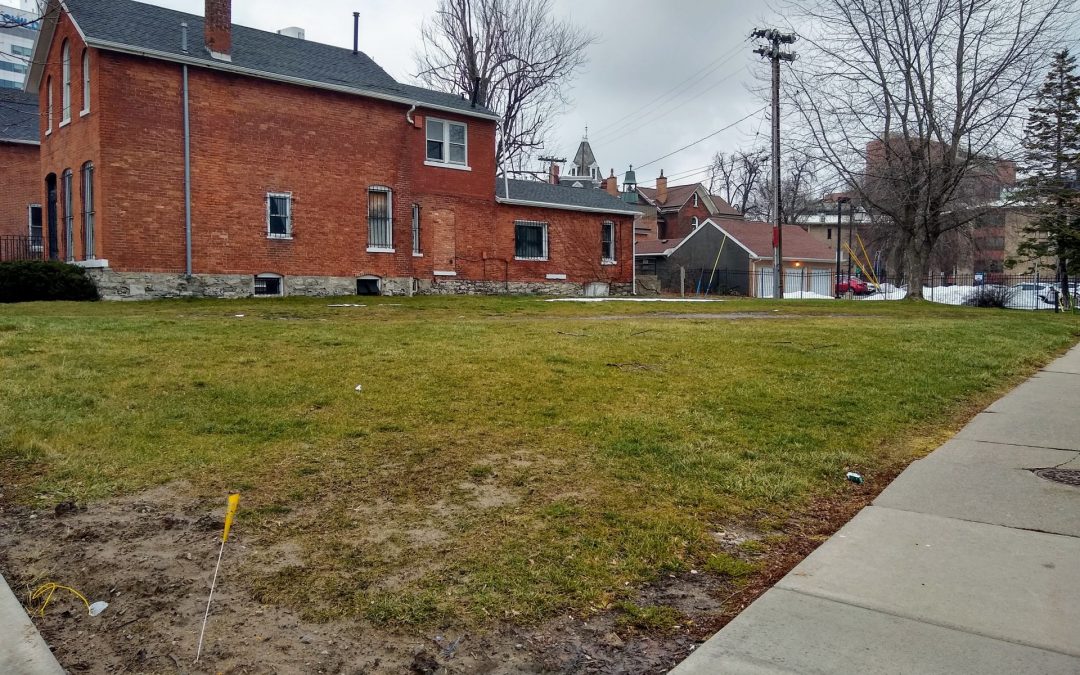 After writing and publishing a post about an urban hike I did in the Medical Corridor, I received an email from a reader regarding a home that used to be at 923 Washington Street, now an empty lot (photo above). What a story it turned out to be!

I had originally reported in the post, that word on the street told me that there was a home on Washington Street at the corner of Carlton. And that the city had tried to take ownership for development. There were two sisters who were in their 90’s living there. They fought the city in court to keep their home. But eventually the sisters and the city came to an agreement to move the house. The person who told me the story didn’t know where the house had supposedly been moved to.

The address at 923 is now a vacant lot. I lamented that the two elderly ladies went through an awful lot of grief to make way for a vacant lot.

After publishing, I received an email from a reader revealing the real story. I did a little research on my own, and decided to write a whole new post about the Beck family home, because I think it’s important that we learn from our mistakes. And I believe that what happened in this case was a mistake. This is what I’ve learned.

The home in question was not moved off of the property on Washington Street, but had been moved to that location. But, let’s go back and start at the beginning.

The home was built sometime around the Civil War, by the grandfather of sisters, Anna and Veronica Beck. It was built on Ralph Street, or Ralph Alley as it was known at the time. Ralph Alley used to run parallel to and one block west of Michigan Avenue near Goodell.

The occupation of Anna and Veronica’s grandfather is unknown. As is the occupation of their father, Frank Beck. I believe Anna lived in her grandfather’s home and took care of it on a full time basis. Veronica, however, according to census records, worked as a bookkeeper for Marine Bank. All of the family members, including Frank’s wife Lillian (mother of Anna & Veronica) lived in the home at 42 Ralph Alley. They were members of St. Louis Church on the corner of Main and Edward Streets.

Funny to think of that now. But back then, extended family members lived together much more often. Anna and Veronica lived with their parents, and probably their grandparents until the elders passed away. Think about that for a minute. I love my kids and everything, but I’ll admit I’m glad they don’t live with us anymore. And I’m pretty sure they’re happy about it too. Just sayin.

In the 1970’s most of the neighborhood around the Beck home at 42 Ralph Alley was razed as part of the Oak Street Urban Renewal Project. The project included the building of the McCarley Gardens apartments. The neighborhood was very densely populated with homes. Over a hundred were torn down. Anna and Veronica took the city to court in order to save theirs.

It was a lengthy court battle, roughly two years, but the sisters won. Well, sort of. The city agreed to move the house from its original spot on Ralph Street, to the corner of Washington and Carlton, aka 923 Washington Street. Through tough negotiation, the sisters were deeded the land as well, and it was stipulated (by the sisters) that upon the death of the last family member, the home would be torn down and the city was to be given an option to buy back the land for $100. Both the sisters and officials for the Buffalo Urban Renewal Agency signed the agreement.

The sisters were happy with the outcome. And by that I mean I’m sure they would have preferred that none of it had happened, but they didn’t lose their home. And they could still walk to their beloved St. Louis Catholic Church, which was apparently one of the sticking points in the negotiations. They had lived in the shadow of the great spire of St. Louis their whole lives and didn’t want to leave it. Now, they wouldn’t have to.

The sisters lived out their days in the home (Veronica passed away a number of years before Anna).

In 1998, Anna Beck, the last surviving family member passed away. Per the agreement entered into with the city, her will stipulated that the home be torn down and the city be given the option to purchase the property for $100.

Well, guess what?  The city changed its mind.  To be fair, the common council of 1998 were somewhat more preservation minded than those of the 1970s.  The common council felt certain that the home was historic (although it held no such distinction) and so the city took the Estate of Anna Beck to court to block the demolition.

It seemed the City of Buffalo and the late Anna Beck had unfinished business.

What About the Home Itself?

The home itself was a veritable museum at this point.  It was reported at the time that it appeared that no updates had taken place in the home after the 1930s.  The contents included cooking utensils, an early Hoover vacuum cleaner, a refrigerator that was not much more than an ice box, a wringer washing machine, a treadle sewing machine (run on foot power!) and vintage 1930’s furniture.  All still being used in the 1990s! Anna cooked on the same cast iron stove her mother used before her.  The home was painted the same yellow color with green trim.

The Final Fate of 923 Washington

But, in a court of law, the will stood up to the challenge.  Erie County Surrogate Joseph S. Mattina ruled for Ms. Beck, as her will was very clear and ironclad. In what he called a very difficult decision, he had to uphold the letter of the law (as he is charged) and ordered that the executor of Anna’s estate go through with the demolition. The ruling itself is a fascinating read. (Believe me, I know what that sounds like!) Read it here.

The executor, by the way, was the Rev. Louis Gonter, who was a parish priest for the Diocese of Buffalo. The bulk of Anna’s estate, amounting to roughly $150,000 was left to St. Louis Catholic Church, which meant so much to Anna and her family.

Throughout my research into this topic, I found myself wondering about Anna Beck. Wish I could have met her. She must have been the definition of a complete minimalist. I think I live pretty simply. But not like Anna Beck.

I have so many unanswered questions. Why would she have been so adamant about having the house razed? Was it out of spite because the city forced her and Veronica off Ralph Street and over to Washington Street? Or did she really feel that no one else should live in her family home? Also, the way she never changed or updated anything in the home. If she was really so attached to the stuff of her parents and grandparents, why demolish the house?

Also, what would cause a person to never update anything in their home at all? I get the old adage, “If it ain’t broke, don’t fix it.” But…geez. A wringer washer? Who knows? It may have been living through the depression that was at the root of Anna and Veronica’s thrift. I don’t think it was money. Anna left a residual estate of $150,000 in 1998. She wasn’t loaded, but she wasn’t poor either.

I have mixed feelings about this story. On one hand, I’m a preservationist at heart. To be able to see this home now, as Anna left it in 1998 would be amazing. The fact that we lost a home, much preserved back to the 1930s, is a real shame from a historical standpoint.

I’m sure that all of the items inside, or ones like them, would be able to be gathered to create the museum that was 923 Washington Street. But it wouldn’t be the same, would it? Just the fact that they were all under that roof, being used regularly until 1998 would make it a museum worth seeing.

That’s such a big part of what we history nerds love so much. It’s the stories behind the buildings we so admire. Wondering about the people and the places they inhabited. Where they lived, laughed, cried, and loved.

This simple home told the story of three generations of a Buffalo family. It lasted far longer than most of the mansions on Millionaire’s Row over on Delaware Ave. I’d love to be able to see Anna Beck’s home today, just as it was when she lived there.

On the other hand, I understand the law, and in this case, it was upheld to the letter. Erie County Surrogate Joseph S. Mattina’s ruling was fair, thorough and brilliant. He saw both sides of the argument, and no stone was left unturned in his decision. From the ruling: “Valid contracts cannot be so cavalierly breached.”* The City of Buffalo (Buffalo Urban Renewal Agency) and Anna Beck entered into a binding contract. Anna Beck executed her agreement with her last will and testament. The city of Buffalo was forced to uphold theirs.

And with that, we lost the home at 923 Washington Street, formerly 42 Ralph Alley. It’s as simple, and as complicated, as that.

There’s no real sense in spending a lot of time on it. What’s done is done. But at the beginning of the post, I said I thought that what happened here was a mistake. By that I mean that back in the late 70s, no one recognized this home for what it was. And in the twenty years following, still no one noticed. No move was made towards preserving the treasure that it was. To have a vernacular home from the 1860s, in the heart of the city, virtually unchanged since 1930…would be incredible.

The judge’s hands were tied in this case though.

We are better at this now than we used to be. We’re moving in the right direction. As a city, let’s not make this mistake again. Let’s move forward.

**Special thanks to Jerome Puma!

***Since the home was demolished, this lot has been owned by both Kaleida Health and Roswell Park Cancer Institute. It is now owned by 927-937 Washington Street LLC.