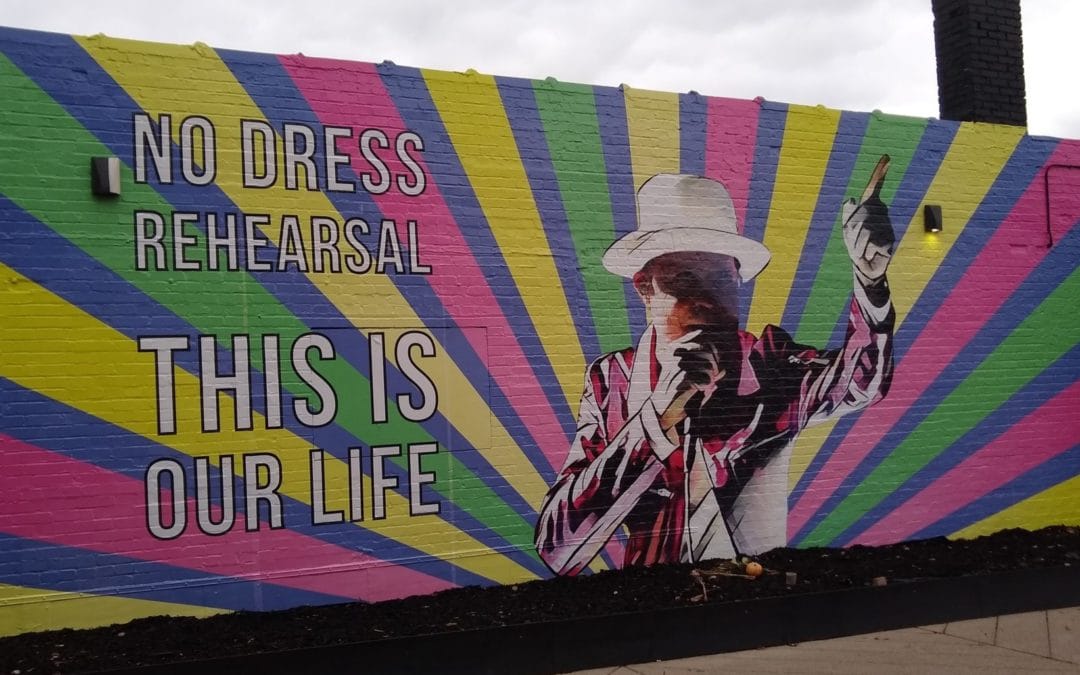 Sooo.  Hertel Ave street art.  I could just say it’s everywhere and leave it at that.  Take a walk.  But first prepare to have your mind blown.

Although there is one thing I’d like to talk about that I haven’t covered in the first two parts of this series on street art.   It’s the process of creating what I call a design mural.

A design mural is first created by an artist on some sort of canvas, and is then blown up using technology and applied to the buildings in a series of panels.  The 3M material they use looks just like paint, but it will supposedly last longer.

That’s a good thing, because in Part 2 of this series, we talked about how street art is temporarily permanent.  So making the murals last longer is a good thing.

Check out this mural on Hertel, but inside the Dash’s Marketside Cafe.  The artist is Casey William Milbrand and this one is a design mural.  I think it’s fabulous! 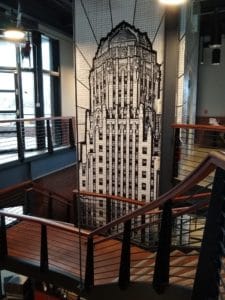 Notice as well that the Albright Knox Public Art Initiative has sponsored some of these new ‘design’ murals.  They are seeking to recognize the artistic nature of the talented designers in the Buffalo area. Some people are skeptical about whether these murals are actually art, but an awful lot of people believe that it is.  It’s simply another form of art.

You decide.  Beauty is, after all, in the eye of the beholder.  I’ve noted which of these are design murals. 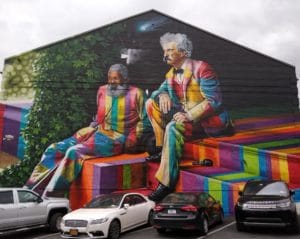 This mural is by one of São Paulo, Brazil’s most celebrated street artists.  When Kobra does a mural, he looks into the history of the region and often uses historically significant figures in the mural he creates.  Mark Twain lived in Buffalo from 1869 – 1871. A few years later, he met John Lewis when John saved Twain’s sister-in-law and niece from almost certain death, by heroically stopping a runaway horse that was headed for a cliff.  The two formed a lifelong friendship. In the mural they appear infinitely comfortable with each other. 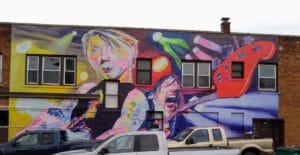 This mural is a collaboration between Philip Burke and Zoom Copy’s Rory Allen.   Burke is a world renowned artist who is also a Buffalonian. He’s done extensive work for The New Yorker, Time, Sports Illustrated and Vanity Fair, not to mention the Buffalo News and countless others.  Together they chose to pay tribute to Buffalo music icons Robby Takac and Johnnie Rzeznik (of the Goo Goo Dolls). The original painting measures approximately 6 feet by 2 feet. The transfer to the wall was reportedly especially challenging due to the many interruptions in the wall.  The Goo’s are Buffalo natives and are beloved by many here in the Queen City. 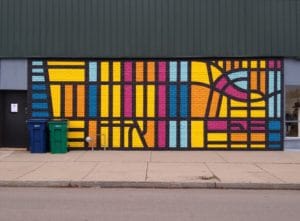 I cannot say it better than the design firm who collaborated to create this mural.   From the website of White Bicycle:

“We Are Here is a dynamic take on a map of North Buffalo, roughly bordered in this rendering by Taunton Place and Linden, Elmwood, and Parker Avenues. At a distance, the word “we” subtly emerges in shades of yellow and orange. This symbolic gesture suggests a vision of community based in equal parts shared and distinct identities, a space where we honor our common values even as we celebrate what makes us different. It is these connections that build the character, strength, and resiliency of our region. The composition also harkens to the designs of the Roycroft community based in East Aurora, southeast of the city, in the early twentieth century and the stained glass common to churches throughout Buffalo.” 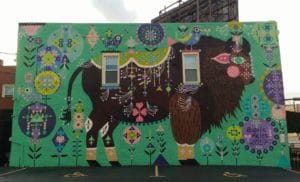 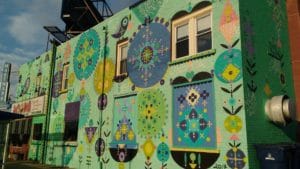 The artist’s signature style is an eclectic mix of her Polish and Russian heritages.  She uses Poland’s brightly colored folk art and the world of Russian fairytales, mixed with the vivid memories of colors of her youth growing up in Colorado.  She expresses herself through her art, and would simply like to make people feel safe and be able to imagine a world that is innately good when they look at her paintings.  I know Magic Buffalo gives me a light-hearted whimsical feeling. 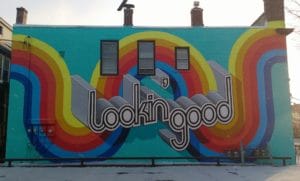 Tough to top his Greetings from Buffalo (seen in Part 1) mural that ignited thousands of selfies and wedding proposals downtown on Ellicott Street, but Casey Milbrand achieves great heights with this mural on Hertel Ave as well.  Casey is the quintessential Buffalo artist.  He obviously loves this town, and it shows.  Milbrand got the inspiration for this mural while working on Greetings.  The story goes that while he was painting people would walk by and yell over to him “lookin’ good” in a typical friendly Buffalo fashion.  The throwback, 70’s style font for the mural was inspired by the newly renovated North Park Theater on Hertel.  North Buffalo IS lookin’ good. 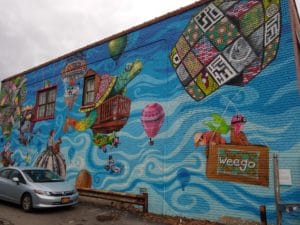 This mural is a collaboration between much beloved Buffalo artist Chuck Tingley and Matt Grote who goes by the street name Ogre.  It is based on the idea of a surreal balloon festival and features a Rubick’s cube as one of the balloons.  Reportedly, these two artists work so well together, they barely have to talk to execute a design.  Amazing.  This mural, to me, fits the neighborhood so well.  It’s so whimsical, family friendly, and fun.  I can imagine kids from the neighborhood getting lost in this one, begging their parents over and over again to stop just to look at some detail they’ve not noticed before.  Once again, Tingley and Grote have captivated us. 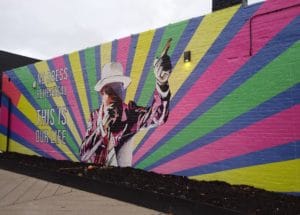 This mural is a tribute to Canadian rocker Gord Downey of the Tragically Hip. ‘No dress rehearsal, this is our life’ is a quote from their song, Ahead by a Century. The Hip is not a Buffalo band, but they do have a huge fan base here.  Artist Rory Allen of Zoom Copy wanted to create this tribute because of Buffalo’s obvious affection for him, because of his unfortunate medical diagnosis (which resulted in his eventual death), and for the amazing artist that Gord was.  The mural was completed approximately three weeks before Downey’s death from brain cancer in October 2017.  If you are not familiar with the music of the Tragically Hip, looking it up would be a very Buffalo thing to do. 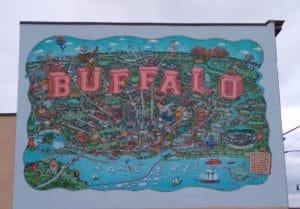 This mural is a collaboration between Mario Zucca and Rory Allen.  It’s a design mural that originated with Allen asking the owner of the building, Ikram Massabini (MVP Network Consulting), if he would be interested in a mural.  Massabini agreed and Allen searched the internet for a design.  He found Zucca’s painting of Buffalo that was being sold as prints online.  Zucca chooses cities with a lot of hometown pride (hello Buffalo) and then asks friends and others for iconic places to include in the paintings.  It’s quite detailed if you look closely.  Love it.

I would be remiss if I did not include at least a few photos of Hertel Alley which runs behind the buildings on the south side of the street between Colvin and Traymore.  There’s some great stuff on these walls.  Some done by well known artists that have been featured in this series.  Some by artists who have become better known since their work here.  Take a walk back there if you have the chance.   Here’s a few of my favorites. 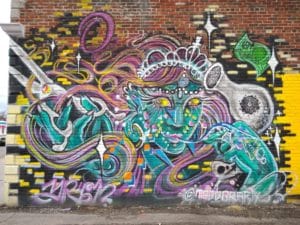 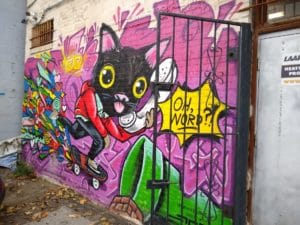 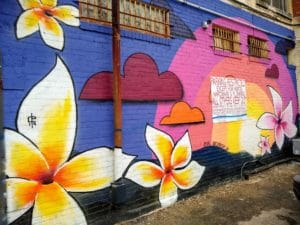 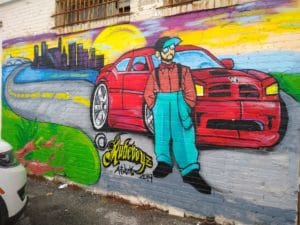 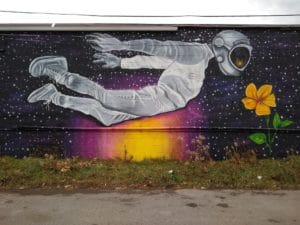 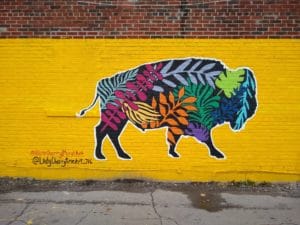 Street art really does something for the mood of a neighborhood.  It’s a win win in my mind.  The artists get work; the building owner gets increased property value; the businesses in the vicinity get increased foot traffic, and last, but certainly not least, the people of the neighborhood get to see art the quality of which they would normally have to pay to see.  All while running errands, going out to eat, to grocery shop, etc., lifting your mood as you go.

I cannot for the life of me think of anything bad about street art.  There is no down side.  It’s all good.  And it’s all over Buffalo. 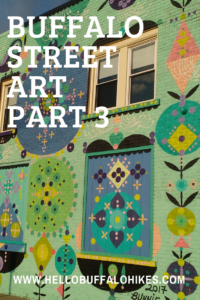