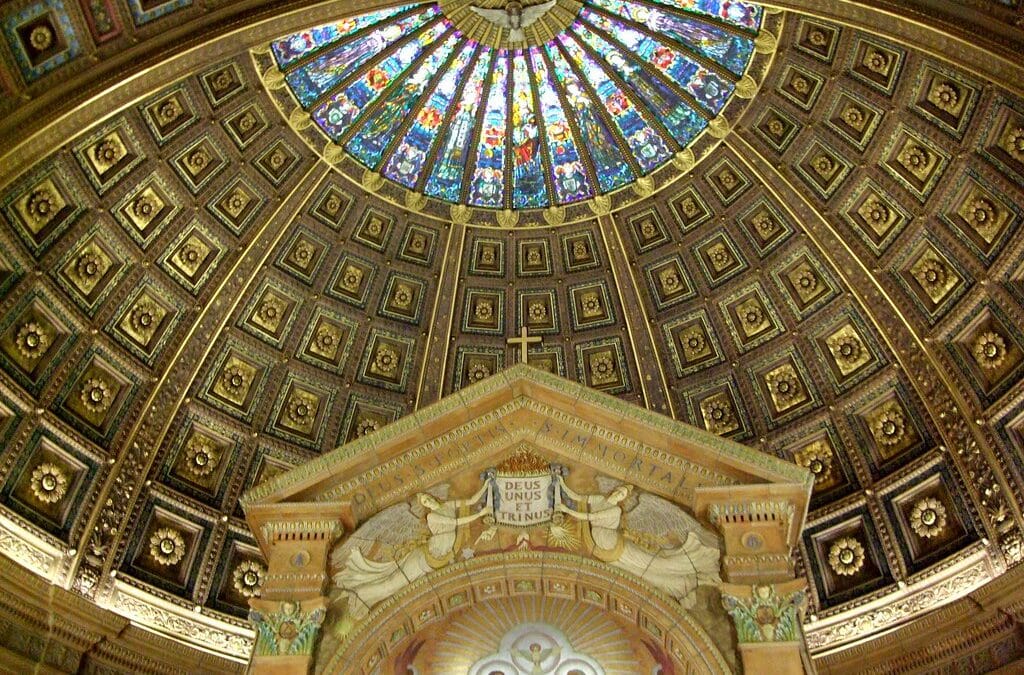 Blessed Trinity Church has been on my list of things to write about for quite some time. And recently, I’ve received several emails asking me to write about it. Because I love this church so much and because it’s one of Buffalo’s greatest treasures, how could I refuse?

It was my husband’s Grandmother’s church when they lived around the block on Kensington Avenue. I knew Grammy Z, as we called her, for many years before she passed away. She wasn’t an easy person to get to know, didn’t open up very often. But she did talk to me about her years at Blessed Trinity. She didn’t give me very many details, (it simply wasn’t her way) but I got the idea she was comfortable there. So that made me want to see it.

When my husband and I decided to visit a different church every Sunday during lent, based on the tradition to visit seven churches on Holy Thursday, Blessed Trinity went on the list.

Let’s start at the beginning.

In June of 1906, Bishop Charles Colton established Blessed Trinity Parish in the mostly German and Irish neighborhood on the East Side. The first pastor was Father John Pfluger. The first mass was held on the third floor of a building at 175 Dewey, at the corner of Sanford. The building also housed a grocery store and apartments on the first two floors.

A very humble beginning when you think of the magnificent church that was to come.

The church was legally incorporated by the end of 1907 and had acquired land on Leroy Avenue. A combination of church, school, and social hall was erected. The basement walls were built from the stone that had to be excavated in order to build. Also, the architects didn’t wire the building because it was thought that power would never be brought this far out of the city.

It was very common back in the day to have this combination type of building as a ‘starter’ church while a congregation grew. That way, if the congregation didn’t grow, not too much money was lost on an elaborate church building.

Well, Blessed Trinity grew. There were 60 people in attendance at that first mass. By sometime in 1908, the Sisters of St. Joseph began teaching in the school on the second floor. By 1911, there were 400 families. Two years after that, a rectory was built. The growth continued.

In 1914, Father Albert Fritton came to Blessed Trinity as the new pastor. He concentrated his efforts on growing the school. By 1919 there were over 300 students in attendance. Pretty crowded for a second-floor school in a combination building! The need for a new church became apparent and Fr. Fritton began to make plans.

By 1923, the architectural firm of Oakley and Schallmo had completed the plans and building commenced. It took five long years to build, and more than double the budget to complete. In the end, the final cost was $513,000, or just about $7.5 million today. The parish would not pay off the debt until 1953!

I just want to take a minute to discuss the cost involved in building a church of this kind. I try to imagine how the congregation of my current church would react to the pastor asking for even half of $7.5 million.

In 1925 the average weekly income in the U.S. was $36.37. Remember that most households at the time had just that one income. For the people of Blessed Trinity’s parish to raise enough money to pay off a $513,000 debt was astronomical.

It happened all over the city though. At all the churches. Of all denominations. Maybe not to this extent, but these people made sacrifices to finance the great churches we admire today. Do you think these early Buffalonians understood what they were doing for us when they committed their hard-earned dollars to finance Buffalo’s churches?

For whatever reason, I am certainly glad they did! We have been blessed through their efforts.

Getting Back to Blessed Trinity

Let’s get into discussing the church itself. The design is Lombard-Romanesque, rarely seen outside of Italy. Buffalo’s own Jozef Mazur painted the murals in the dome, transept and choir loft. And they are fantastic! Many, many other artists and craftsmen contributed as well. The entire inside of the church is adorned with paintings, mosaics, sculptures, statues, reliefs, wood carvings, stained glass and tile work. It’s impossible to describe with words.

The outside of the building is unique as well. The structure is made of Harvard brick, which is a medieval brick-making process that does not use molds to form the bricks themselves. The bricks here were made in New Hampshire by French immigrants who used antiquated tools and methods to create each brick by hand. The result is the appearance of a much older, rudimentary design. The process was used in more “modern” design as a handmade, artisan brick. They’re stronger than our more modern bricks, and the mortar adheres to them better.

It completely fascinated me when I saw it for the first time. It still does. I kept trying to figure out the pattern. I didn’t realize at the time, there was no pattern, and that’s the genius of it. That someone could use these bricks and create a level, precise, true building. And yet, this building is as straight and true and they come.

I’ve read that the terra cotta on this church contains the most colorful use of terra cotta in the country. I should also mention that it holds over 2,000 symbols of Christianity. Two thousand. There are the Ten Commandments, the Blessed Trinity, the Our Father, the Apostles Creed, and many more. The symbolism was designed by Father Thomas Plassman, who was the President of St. Bonaventure University and also happened to be a good friend of Fr. Fritton. The two were seminarians together in Austria and traveled to northern Italy where they learned about Lombard Romanesque design.

What a stroke of luck for us that these two priests ended up here in the Buffalo area.

Blessed Trinity Through the Years

Blessed Trinity thrived as a parish through the 1950s, but went the way of most of Buffalo’s churches in the 60s and 70s. Attendance fell off, pews were empty and the school suffered. The Sisters of St. Joseph announced in June of 1975 that they could no longer staff the school. It closed in 1976.

Fr. Walter Kern, who had become the pastor in 1974, researched and wrote an illustrated handbook about the church which attracted the attention of the Buffalo Preservation Board. The board recognized the building as a City Landmark. Two years later the church was accepted onto the National Record of Historic Places. It’s only right. This place is exceptional in every way.

The church is open now with Covid-19 limitations, like all churches in NY State. They continue as a close-knit community, small in numbers, but large in enthusiasm and faith.

Current event at the church. From Blessed Trinity’s Facebook page:

“On Tuesday night, July 28, the recently rebuilt plaza in front of Blessed Trinity Church sustained substantial damage when a driver heading west on Leroy lost control of his vehicle and crashed through the retaining wall on the east (ramp) side of the church. The car became airborne, landing on its roof in the center of the plaza near the street-level stairs. By the grace of God, the driver and passenger were able to walk away and the church itself does not appear to have been damaged. The accident has been reported to the driver’s insurance carrier, and [the] masons who performed earlier work will be returning to estimate the time and cost involved in restoring the area once again.”

Blessed Trinity Church is such an impressive building. I cannot stress this enough. You could literally (or I could anyway) spend hours just looking at all the details that are everywhere inside and outside this place.

But on that day when I first experienced it, at a Lenten mass all those years ago, what impressed me the most was the friendliness of the congregation. We were obviously not parishioners. There were only about 30 other people in attendance, besides our little group. At both the sign of peace, and after the mass itself, people approached us and welcomed us with open arms. They asked about our home parish, talked openly about the neighborhood, and the church itself. One woman even took me into the sanctuary to show me a particularly beautiful icon of the Blessed Virgin Mary.

I can tell you this. I don’t think Grammy Z felt the grandeur of Blessed Trinity was necessary. When we spoke of the church, she only talked about a couple of priests she particularly liked, and one or two friends she made there. Never mentioned the architecture. That’s why I was so blown away when I went there for the first time. This incredible masterpiece and she never mentioned it. Only a few people who made a difference to her. Keeps it all in perspective, doesn’t it?

Go see this church. If you don’t go to any other, go see this one. You will be as amazed as I was. Blessed Trinity offers tours by volunteer docents. Just call the rectory, or contact them through their website. You’ll love it!