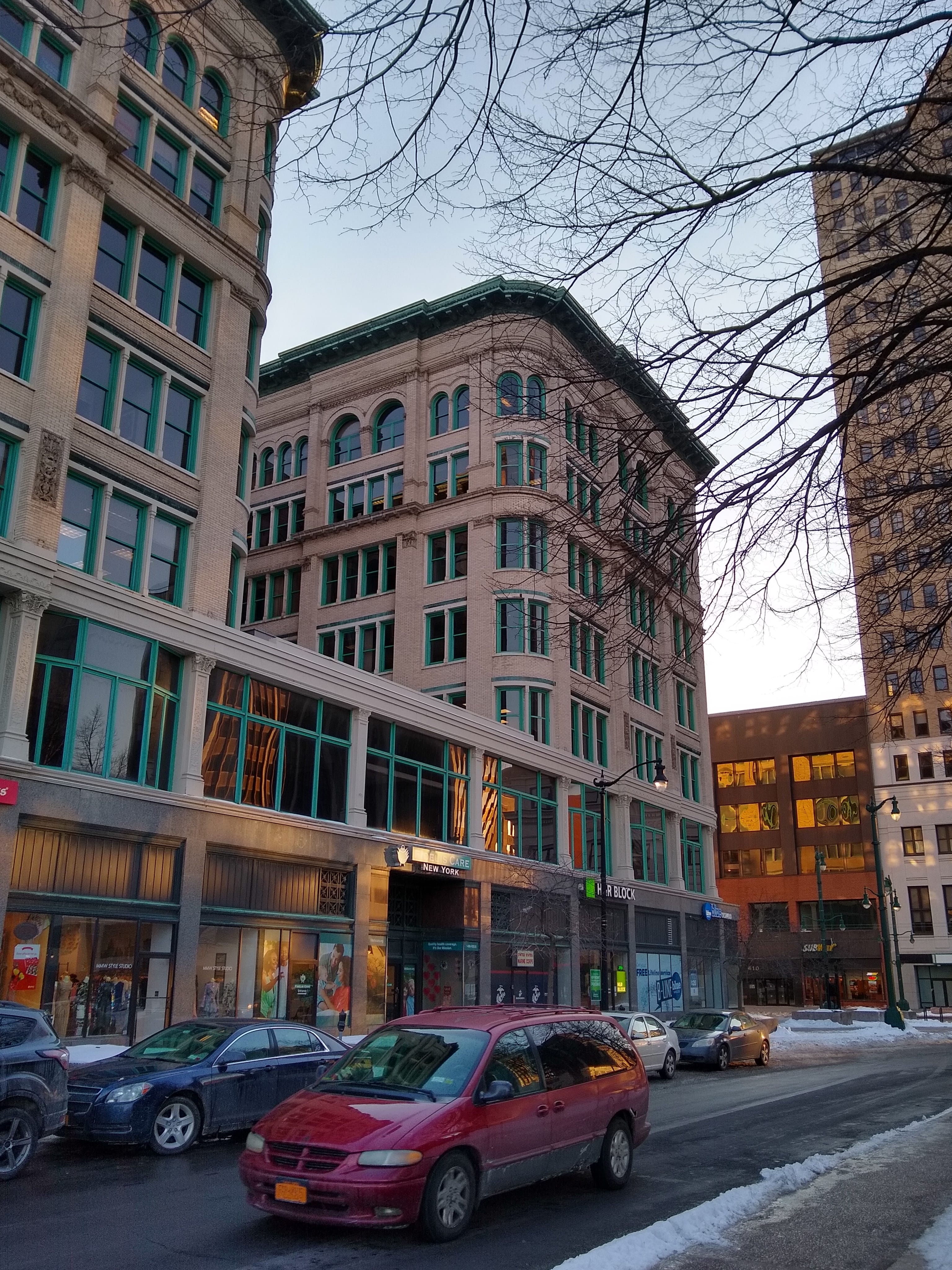 The Brisbane Building on Lafayette Square

Several years ago now, I took a job with an accounting firm.  I started on the first day the firm opened in their new building.  The reason I mention this is because they had just left the Brisbane Building.  Everyone talked about it as if it was the oldest, draftiest building the city has ever seen.   They were happy to be out of it.

I, of course, was fascinated.  I’d seen the building, but had never been in it.  I’d spent years attending the Thursday in the Square concerts that used to take place in Lafayette Square, right in front of the Brisbane Building.   I would look up and wonder what those beautifully curved glass windows have witnessed over the years.  Just who they’d seen, and what they’d heard.

Let’s travel back in time to before the Brisbane Building was built.

The Arcade Building, pictured below, occupied the space where the Brisbane is now.  It was built in the 1850’s after a fire devastated the entire city block.  Housed in the Arcade, the largest office building in the city at the time, was the Buffalo Fine Arts Academy (the organization that became the Albright Knox Art Gallery), Shea’s Music Hall, and T.C. Tanke Jeweler’s, among other businesses.  It was built for George and Albert Brisbane.   Wish I could have seen this one. 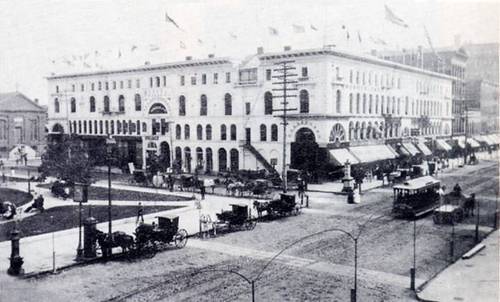 Unfortunately, in December of 1893, The Arcade Building was also devastated by fire.

As a side note, during the 19th century, fire was a recurring theme in Buffalo’s city center.  It was in the last years of the 1800’s that architects and builders began to pay special attention to the possibility of fire and took steps to prevent total loss through the use of more ‘fireproof’ building materials.

It is a U-shaped building which was quite common for its time in order to bring  natural light into the offices. The first two floors filled in the ‘U section’ and  the second floor was covered with a beautiful skylight to bring in even more natural light.  The entire building has large windows for the same reason. Although the building was built with electricity, electric lighting was not what it is today.  We use Edison bulbs for ambiance nowadays, but back when the Brisbane was built, they didn’t quite cut it for lighting up offices, hence the shape of the building, and the large size of the windows.

When The Brisbane was completed, it was the largest mixed use ‘mercantile and office’ building in the city.  It was designed to house a large retail establishment on the first floor and the second floor contained sixteen retail spaces for smaller stores, with an open center court covered by that skylight I mentioned a minute ago.   (See below.)   The remaining five floors were offices. 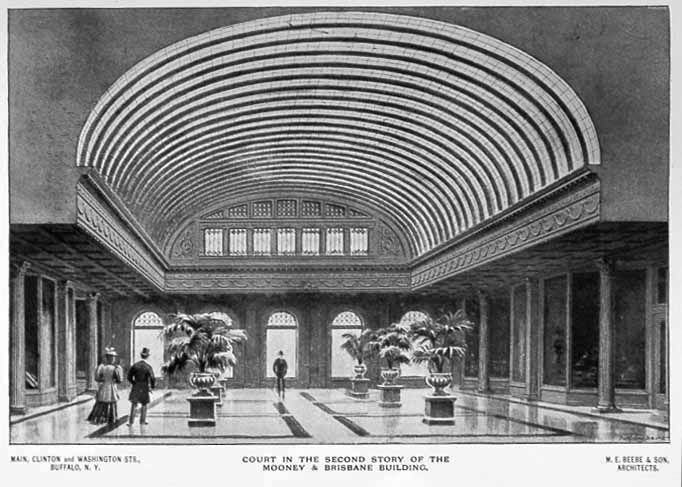 Photo from Architectural Portfolio of Some of the Buildings Erected by M. E. Beebe & Son, Architects Buffalo, N. Y.

In 1908 the building tenants included three of the largest name brand stores of their day.  They were Kleinhans Men’s Store, Seymour Knox’s largest location of his Five and Ten Cent Stores (which he later merged with his cousin’s chain of stores to become Woolworth’s), and Faxon, Williams and Faxon, the largest grocer in WNY.

Many of the tenants stayed for years.  One of the most notable was Hunt Real Estate founder Stanley Hunt, who ran his business out of the Brisbane Building for 47 years, and only left in 1960 when he purchased the nearby Hurst Building.  Being that he was in real estate, pretty sure that was to be expected.   I only wonder why it took so long.   Could be that he was just happy in the Brisbane Building. 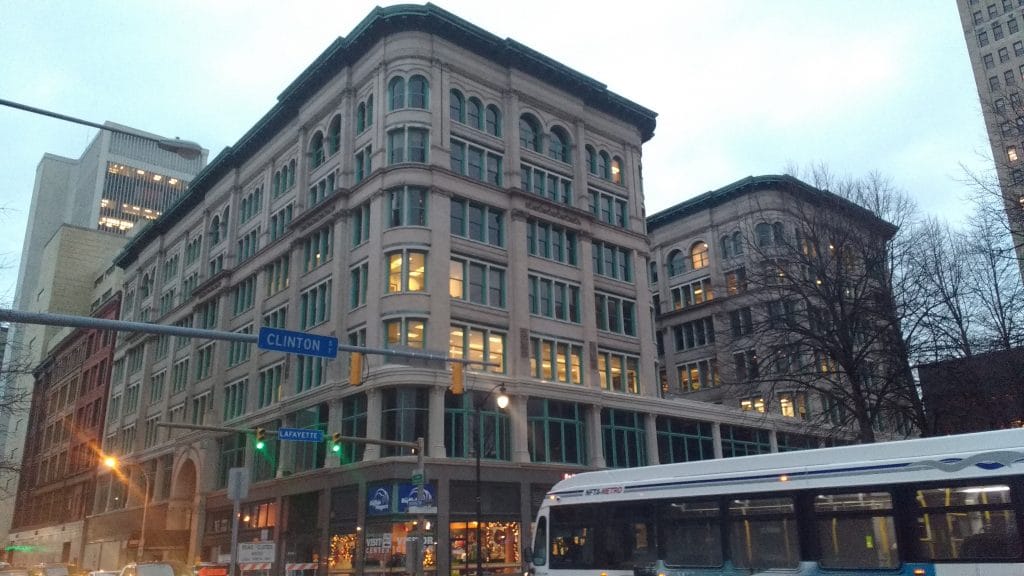 When the city fell on hard times, so did the Brisbane.  In 1986, the building was bought by Stanley Hunt’s son, C. Stuart Hunt, when it was in desperate need of renovation as well as tenants, having just lost the building’s anchor tenant, Kleinhans (talk about a long time lease).

Stuart Hunt, along with his team oversaw the very thorough and very expensive renovation, complete with new roof and windows, all new mechanicals, the creation of new suites, and a renovation of the lobby.  It really is a tribute to his belief in Buffalo that he undertook such an extensive project at a time when businesses were still leaving the city. In 2010, while undertaking more capital improvements, the original Main Street entrance was uncovered.  It has since been restored, and is quite beautiful. 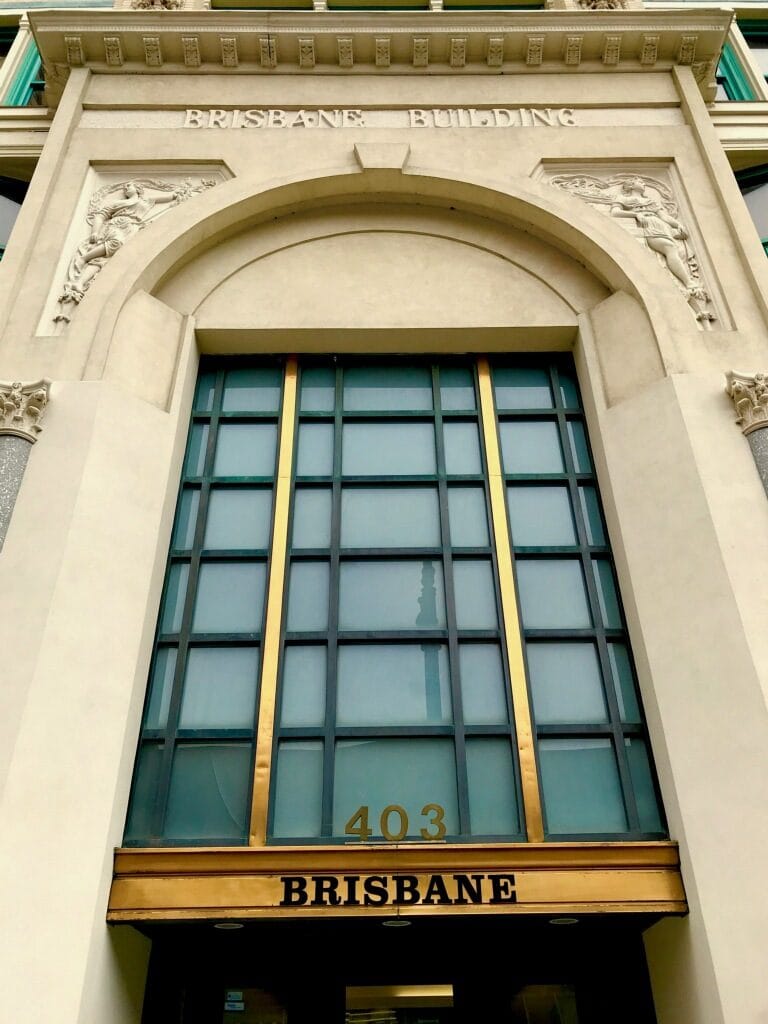 Perhaps following Hunt’s lead, the area around the Brisbane has been coming alive in the past fifteen years or so as well.  Rocco Termini purchased and renovated the Hotel Lafayette, and transformed the former AM&A’s warehouse building into loft apartments. The area has also seen the addition of several very popular restaurants and breweries. Within short walking distance are Big Ditch Brewery, Deep South Taco, Tappo Italian Restaurant and the Lafayette Brewery which is right across the street, just to name a few. Sometimes all it takes is one person to start the ball rolling. 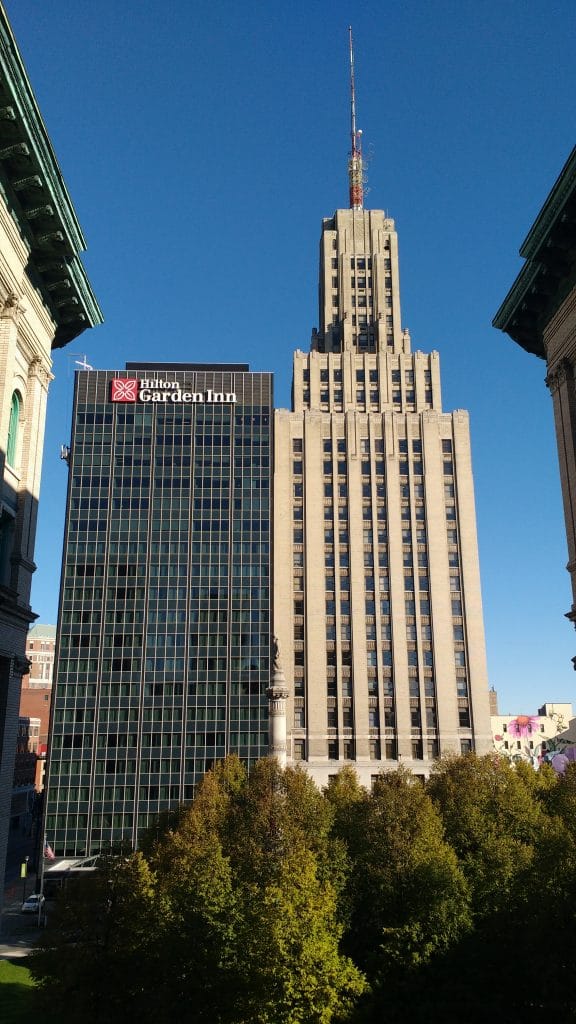 View from the bottom of the “U” across Lafayette Square

It hasn’t happened overnight, but the future of the Brisbane Building is looking bright.  It’s buildings like this one with both history and beauty that will help Buffalonians continue to treasure the past while looking forward to the very promising future ahead.

To this day, I have no explanation for the disdain of the Brisbane Building by my accounting firm colleagues.   I even have it on good authority that the building is definitely not drafty, and I’ve seen the offices.   They’re lovely.   I guess I’m glad they brought this building to my attention though.   It’s become one of my favorites.

See it for yourself.   Check out The Brisbane Building at Main, Clinton and Washington Streets, on Lafayette Square. Don’t forget to look at the restored Main Street entrance, you’ll be glad you did.