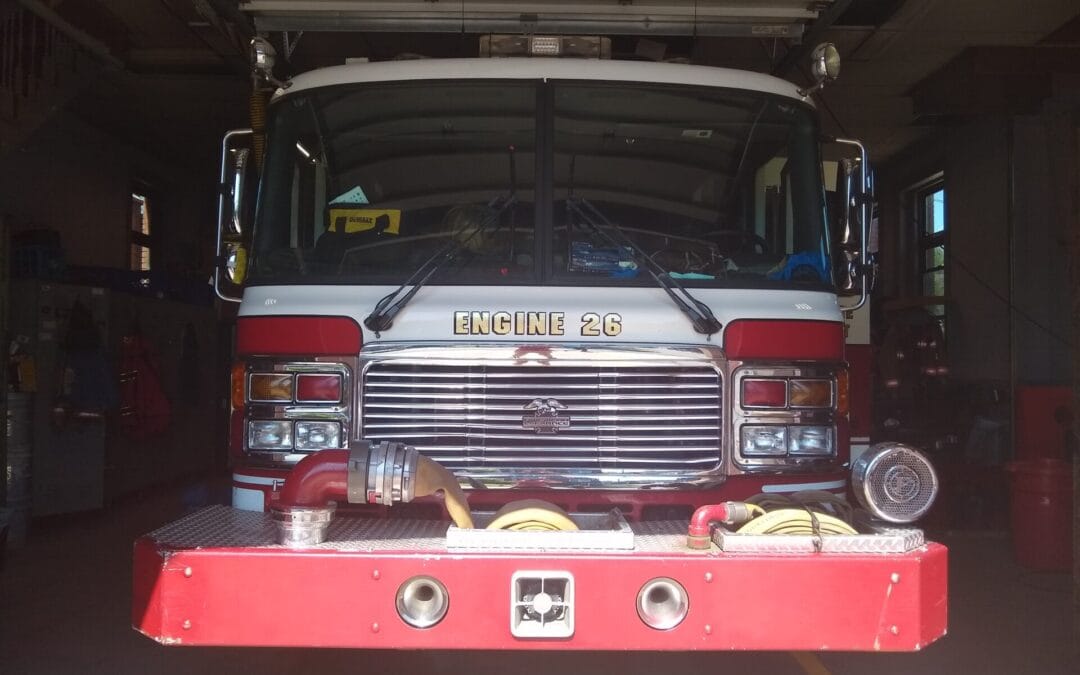 Several weeks ago, I had a conversation with a gentleman about the West Side of Buffalo, just after I published my post about Assumption Church. Twenty minutes in, I found out he lives in a converted firehouse. In that same conversation, he very politely told me that he and his wife were no longer comfortable with public posts about their home. I understood completely.

Only a day or two later, I was contacted through Instagram by a Buffalo Firefighter (Richie) who works at Engine 26 on Tonawanda Street. He mentioned that Engine 26 is housed in a beautiful, historic building, and offered to give me a tour.

One Door Closes, Another One Opens

Well, since I’ve never turned down a tour of any building, I didn’t intend to turn down this one either. The upcoming tour got me to thinking about the role of the Buffalo Firefighters, and how things have changed for them since 1817 when the first fire company was formed in Buffalo.

And as it turns out, I had a few weeks to think about it. You see, we had to reschedule the tour a few times, because, well, apparently firefighting duties trump meeting with bloggers. Ha! But eventually, we made it work.

A Little Bit of Buffalo Background

Before we talk about the building itself, let’s discuss fires in early Buffalo.

During the War of 1812, in December of 1813, the British Army burned the village of Buffalo. Some accounts say one building survived, some say four did. Either way, we were pretty much leveled. After that, homeowners were required to have leather buckets on hand, to fight fires when they occurred.

It stands to reason. I mean, most buildings were built of wood back then because it was the most readily available material around at the time. And when all the buildings are built of wood, well, we need only ask our neighbors in Chicago what could happen if a fire were to break out.

A few years later, 1817 to be exact, the first Buffalo fire company was formed with volunteers. The first hand-drawn pumper was acquired in 1824, effectively creating Engine No. 1 for the Buffalo Fire Department. Official volunteers were organized by the city in 1831 when the very first “Hook & Ladder” truck was purchased. This truck carried all the tools of the trade at the time, which included lengths of leather hose, hooks, ropes, axes, and ladders. Now, don’t get ahead of me here. This wasn’t a truck as we now know them. It was a horse-drawn vehicle. Something like the one pictured below.

By the early 1850s, residents petitioned for a paid fire department. The city turned them down. But in 1859, the first steam-powered engine was purchased. It required a team of horses to pull it, a driver to drive the horses, an engineer to run it, and a man to stoke the furnace. And so, for the first time, the city was forced to pay firefighters.

As the city continued to grow, so did the fire department. “By 1900, the Department had grown to 26 Engines, nine Hook & Ladders, six Battalion Chiefs, five Chemical companies, and two Fireboats.”* The photo below is an early photograph of Engine 26 which was built in 1894. The architect was F.W. Humble, who worked out of the German Insurance Building on Main Street at the corner of Lafayette.

Note the dormers on the front and side of the building. Both have been removed. Gone as well is the rectangular tower on the north side of the building. This is interesting. It originally housed a ‘closet’ where firefighters would climb ladders to the top of the tower and hang the hoses to dry. Thankfully, this is no longer necessary. I’m guessing that the tower at some point needed extensive repairs, and since it was no longer being used, it was simply removed. But the rest of the ‘closet’ still exists inside the building today. I cannot speak for the dormers.

Buffalo first used alarm boxes in 1866. When a fire occurred, a person could pull a hook or turn a knob inside the box and the mechanism would be activated, causing a spring-loaded wheel to turn. This action would tap out a signal to correspond with the location of the fire at the firehouse and simultaneously cause an alarm. In effect both alerting the firefighters of the fire, and letting them know the location of it. I admit I’ve never thought about how old alarm boxes worked. It’s kind of fascinating really.

Engine 26 still has the alarm box mechanics in place, but of course, they are no longer used. The photos below show both the box that holds the fuses and the chart that shows the corresponding street where an alarm would have been pulled. Engine 26 still serves these same streets, but thankfully, with more updated alarm systems in place. 😉

Since we’re discussing a little bit of the history of the Buffalo Fire Department as well as the building at Engine 26, I would be remiss if I didn’t also mention the Edward M. Cotter Fireboat, which was built in 1900. It is the oldest working fireboat in the world, and it belongs to our own Buffalo Fire Department. The boat has undergone several renovations over the years, including extensive repairs to the hull and propellers in 2019. The Cotter can frequently be seen in the Buffalo River, where it’s permanently docked.

Hours were long for early firefighters in Buffalo. In the horse-drawn era, they worked seven days a week, 21 hours a day. They had a total of 3 hours a day off for meals plus two days off per month. Woah! Who would have wanted to be a firefighter back in the day? I mean, I know sleeping was (and still is) allowed, but when did they go home? Talk about a lack of work/life balance!

The work week was shortened to 84 hours in 1916. Called the Two Platoon System, one platoon would work days, and one would work nights. Five, twelve-hour days plus one, 24 hour day to allow the other ‘platoon’ to have 24 straight hours off, once a week. This must have made a huge difference in their lives!

It wasn’t until 1975, that the Buffalo Fire Department moved to a 40 hour work week and a two-day, two-night rotation. So, they work 24 hours, twice a week, with 24 hours in between, with four days (not necessarily consecutive) off per week. This has to make for a much better work/life balance.

The Crash and Rescue Unit at the Airport was created in 1942.

And get this, in 1952 the title ‘fireman’ was changed to ‘firefighter’. But Buffalo didn’t hire a woman firefighter until 1980! That’s late ladies! But, better late than never, I suppose.

Buffalo’s Fire Prevention Bureau was formed in 1941. Remember fire prevention poster contests? When I was a kid, school children would create posters and firefighters would choose the best in each grade level. Winners were notified by phone and would go to their local firehouse to pick up their trophies. They were also treated to a tour, including climbing on the fire trucks.

Is this still a thing? Do they still have these contests?

One year I won a trophy for fire prevention week, and it was a big deal! I remember it very clearly. My family spent an hour or so at the firehouse climbing all over the equipment, and my mother baked a cake in my honor. And someone snapped a photo of the day. I was thrilled. That’s me, front and center with the big, toothy grin!

My Impressions of Engine 26

When I first heard from Richie from Engine 26, I figured this post would be about the building. I mean, he was right that Engine 26 is housed in a beautiful historic building. But at present, the inside is just functional. And I suppose that’s all it ever was. The outside seems special for a firehouse. But that’s because in 1894 most municipal buildings were built this way. It was the standard at the time. Gorgeous to look at anyway. And I love the fact that Richie loves the building he works in.

The basement was cool, with exposed early steel frame construction. I’ve never had the chance to see it up close before. I appreciated that.

But what I was most impressed with was the history of the Buffalo Fire Department. Or should I say the evolution of the Buffalo Fire Department? It’s been around since very early on. It’s grown and changed along with the city itself, according to our needs. And it’s impressive. Also, I’m humbled that I’ve never really looked into it before now, but I’m glad that I’ve had the chance to share it with you.

These men and women are always on duty, waiting to help any one, or all of us in our time of need. That is, in my book, the very definition of a first responder. I’m glad I understand what they do a little bit better. Thank you for that Richie. And thank you for what you and your colleagues do every day.

Oh, and one more thing about Engine 26…

Here are just a few more shots at the fire house. And yes, that’s a genuine firefighter’s pole on the lower left. It’s not used any longer, but Richie seemed to think it is the only one left in the city…cool!