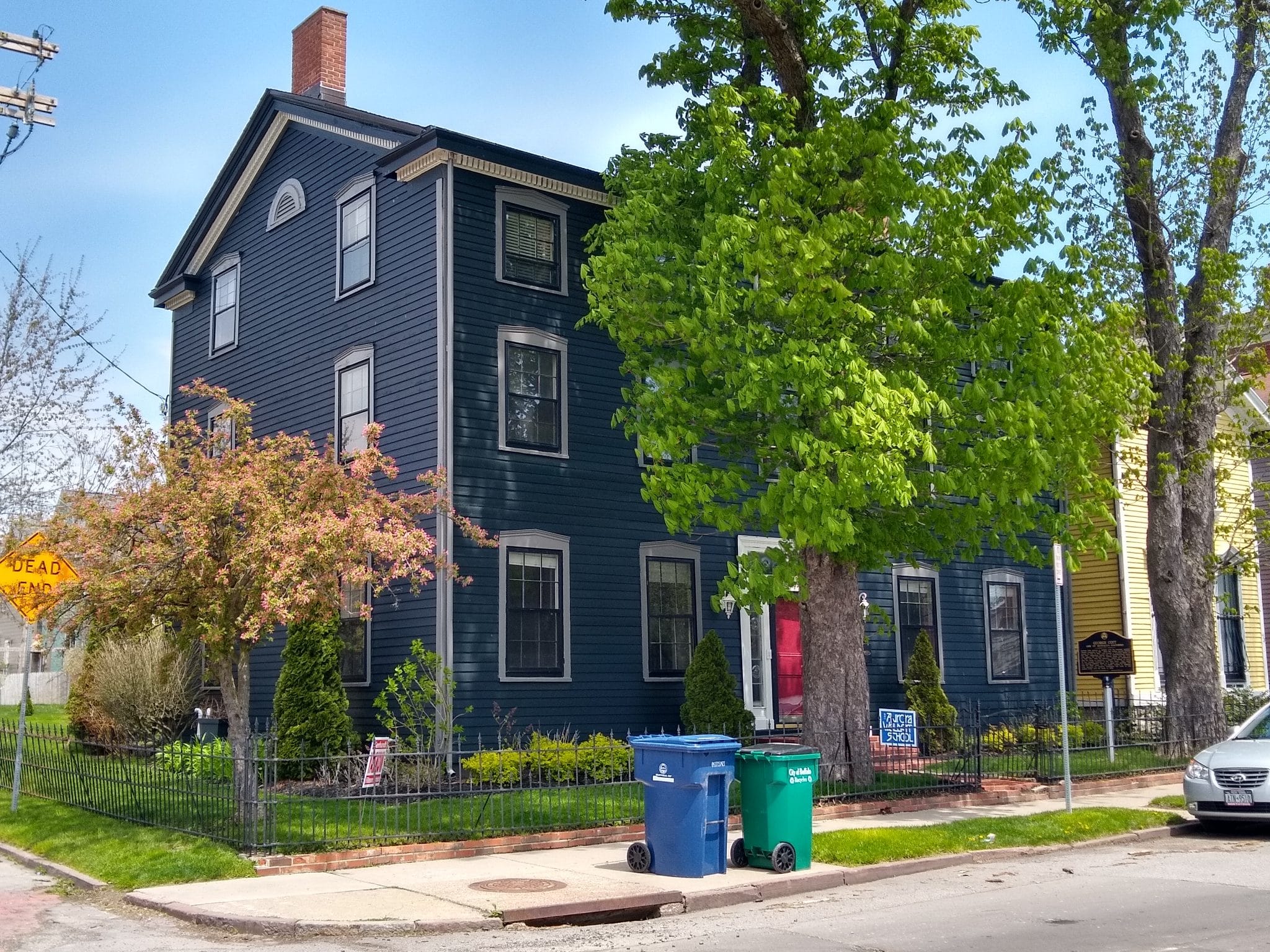 Coit House: Buffalo’s Oldest Home, and the Man Who Built It

Buffalo has got some old homes.  But none are older that the unassuming Coit House, located at 412 Virginia Street.  I say unassuming because the history behind it, and the history that must have taken place inside it, is nothing short of incredible. And yet compared with some of the grand mansions in Buffalo, this home seems unassuming.

The house itself is of the Federal style, with at least two additions added by the Coit family.  There is some discrepancy over the actual date the home was built, but in general it is accepted that it was built not long after Buffalo was burned in 1813, during the War of 1812.  The City of Buffalo records show 1818 as the date built, but the historical marker erected outside the home by the Allentown Association states 1815. There is evidence to prove both dates correct.  Most people agree that either way, it is still the oldest residential structure in the city. 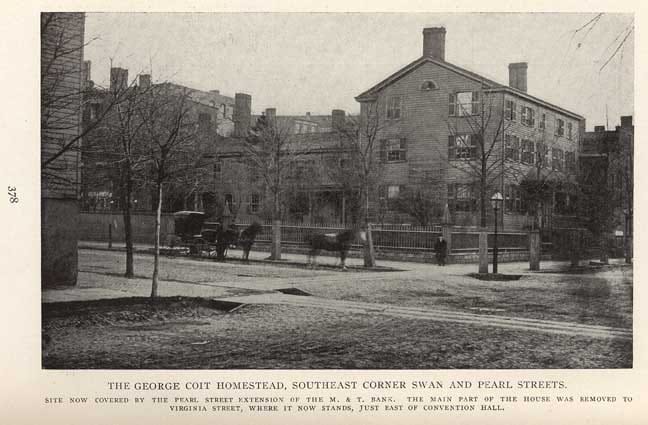 Photo from “The Picture Book of Earlier Buffalo,”  by Frank H. Severance

The house originally stood at the southeast corner of Swan and Pearl Streets.  It’s a great example of Buffalo’s ‘pioneer-era’ residences, and in fact was quite typical of the structures built by the wealthier Buffalonians at the time.  It was built when everything was still done by hand. All the woodwork was hand hewn. Hard to imagine that now. So labor intensive. Very soon thereafter, it would have been built much differently due to fire codes that stated that no new residences could be built of wood, and machining of woodwork became the trend.

As I stated earlier, George Coit, the original owner, added on to the house at least twice, adding a third floor, and extending the home lengthwise.  He also changed the interior somewhat during the years he and his family lived there.  But the home remains largely intact as he left it.  Even though the home has been through several owners who rented the property throughout the years, breaking it up into several apartments, and, eventually putting it back closer to its original design. Some believe that because the house was rented out, a single family didn’t move in and make any major changes to the structure itself to suit their own needs.  This almost certainly would have happened had a single family bought the home to live in during the mid twentieth century.

Let’s talk about George Coit himself.  He is originally from Norwich, Connecticut.  George and his lifelong friend Charles Townsend came to Buffalo in 1811, where they immediately rose to the forefront of the community.  You see, they arrived with 20 tons of provisions, some of the first people to do so.

In 1812, they bought a piece of property on Swan Street, between Main and Pearl Streets.  They opened a drug store in an existing building on that sight.  It would be the first of many joint business ventures the two undertook in the fledgling community of Buffalo, NY.

In 1813, they lost the store when the village was burned during the War of 1812.  But they had managed to escape with some of their goods the day before the fire, and returned to rebuild.

George married and had eight children with Charles’ sister, Hanna. Coit and Townsend were such good friends, the two named their firstborn sons after each other. Coit built a house for his young family at the corner of Swan and Pearl Streets. Coit House.

Coit and Townsend continued in business together.

Seemingly against all odds, and after most of the city’s investors backed out, George Coit and Charles Townsend worked with Oliver Forward and later Samuel Wilkeson to build the Buffalo Harbor, eventually winning the battle for the terminus of the Erie Canal to be located in Buffalo.  Which as we all know, resulted in increased business in shipping (which Coit and Townsend immediately went into together) and eventually railroads, grain processing, motor vehicles, aerospace and all the supporting businesses that go along with those giants. This effectively catapulted Buffalo to one of the largest and most prosperous cities in the country.

Without the Buffalo Harbor, none of that would have happened.

Even when Buffalo’s industrial core moved north from the canal to Swan Street and beyond, and most prominent families were moving north of the city center, George Coit stayed at the corner of Swan and Pearl Streets in his somewhat humble home considering his wealth, with his family.  Hannah had passed away with the birth of their eighth child in 1835. George went on to marry twice more before passing away himself in 1865.

To say that George Coit was an important Buffalonian is an understatement to be sure.  Through it all he remained an unassuming, humble man. Buried at his request in Forest Lawn, overlooking Delaware Avenue in one of the largest plots available,  purchased by Coit himself for his family, with only a simple marble marker placed on his own grave.

In 1867, the home was moved to its present resting place on Virginia Street. 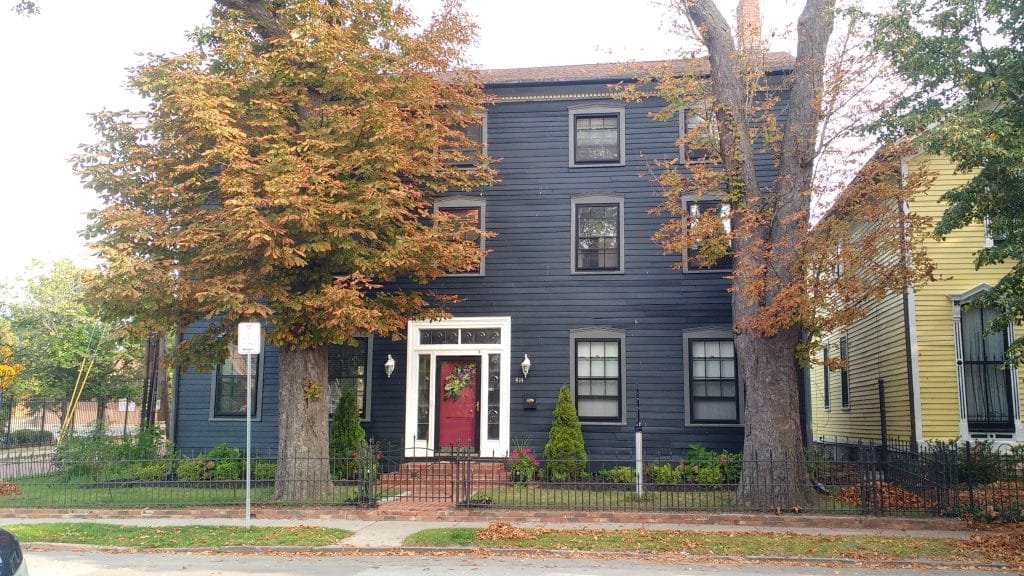 Next time you take a stroll through Allentown, wander over to number 412 Virginia,  and take a moment to imagine the meetings of our city founders that undoubtedly went on in this house.  The entertaining of great Buffalonians. Not to mention the births and sadly, the deaths of Coit family members, including George Coit himself.  Contemplate the man who not only built a home for his growing family, but helped to shape the city we call home. 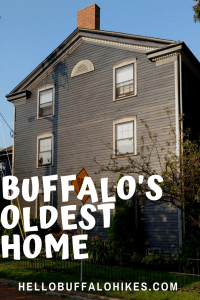