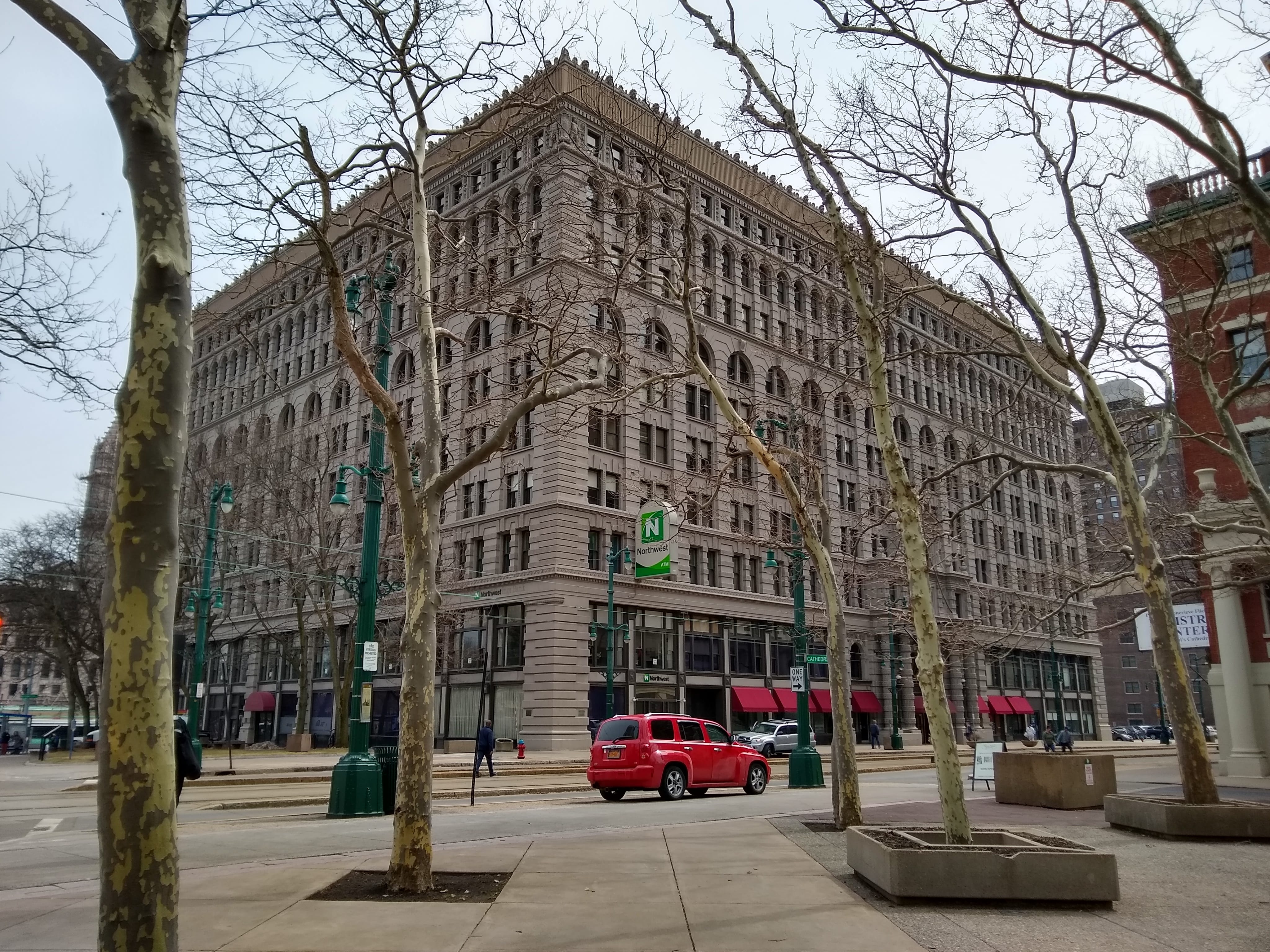 The Ellicott Square Building & Its Namesake

As long as I can remember the Ellicott Square Building has always just been there.  Over the years, I’ve eaten lunch here.  I’ve shopped here. I’ve paid my monthly parking fees here.  I’ve even passed through the building in order to warm up on my way to or from someplace close by. What I mean is, I knew it was beautiful, but I was always too busy to really take notice.

To do that, we’ll start with its namesake.  It was named for Joseph Ellicott, who was an agent for the Holland Land Company, who owned all of Western New York at one time.  In 1804 Ellicott laid out the streets of Buffalo. While doing so, he purchased the piece of property that the Ellicott Square Building stands on. The plot was originally much larger and spanned from Swan Street to Eagle Street (now South Division), and from Main Street all the way out to Jefferson Avenue. 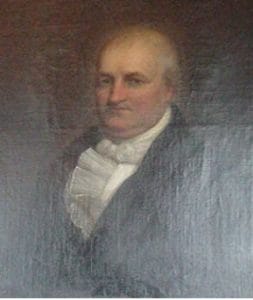 The original property itself had a half moon shape that jutted out into Main Street.  Ellicott had planned to build his family estate on the property, with the mansion sitting in the half moon.  But that plan never came to fruition, and he never developed the property. 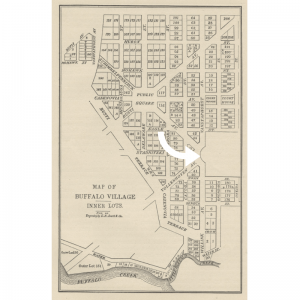 Map of Buffalo Village showing part of Ellicott’s original 100 acres.   Map from “Discovering Buffalo, One Street at a Time: Can’t You Hear the Whistle Blowing on Exchange Street?”

Ellicott divided the rest of Buffalo into lots and sold them at a fair price, with interest, to homesteaders, businessmen and investors alike.  Ellicott was a fair man, and he was reportedly lenient with people who had trouble paying their mortgages, and at times accepted goods for payment when necessary.

It could be said of Ellicott that he foresaw the success that Buffalo would one day enjoy, and he worked hard to contribute to that success.  He in fact, was one of the first supporters of the building of the Erie Canal along with such local leaders as  George Coit  and Charles Townsend, among others.

On a side note, the city and the highway commissioners later decided that Main Street needed to be re-routed to cut straight through that half moon section of Ellicott’s land.  He responded by changing his will, so that the 100 acre plot that was to be donated to the city for a park, would remain with his family members. Had that not happened, the Ellicott Square Building most certainly would not have been built.

Joseph Ellicott passed away in 1826.  He never married or had children, but the rest of his family members inherited the property.

Fast forward almost 70 years, to 1895.  Ellicott’s family members and their heirs still own part of that original 100 acre property. Namely, the part that the Ellicott Square Building sits on today.  At that time, it was already a thriving city block, known as “Ellicott Square”. 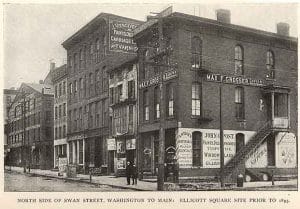 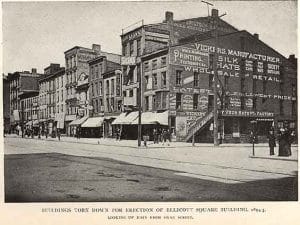 Buildings on the thriving “Ellicott Square” before the Ellicott Square Building was built in 1895-96.   Both Photos from Picture Book of Earlier Buffalo, Severance, Frank H.

The Ellicott Company (Joseph’s family & their heirs) wanted to erect an office   building that would span the entire block.  They commissioned the Daniel H. Burnham Company, specifically Charles Atwood as the architect to do the job. The result was the Ellicott Square Building, which opened in May of 1896. 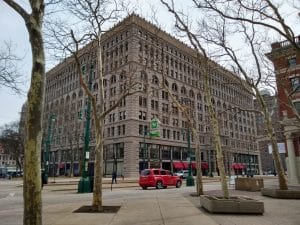 The razing of buildings aside, which was commonplace in Buffalo at the time, you can understand the vision they had in designing the Ellicott Square Building.  They looked at it as merging all the existing buildings into one cohesive, and very efficient, working building.

When completed it was the largest office building in the world.  It indeed spans the entire city block.  It is 10 stories of steel frame construction with the capacity to support 10 more, had 60 offices, 16 counting rooms and 40 retail spaces.

The exterior is terra cotta, granite, iron and brick facade.  The elaborate cornice was removed in 1971 when it began to crumble.  The building was painted a uniform grey at that time, as the building materials had not worn to the same color.  There are still medusa heads lining the roof of the entire building. 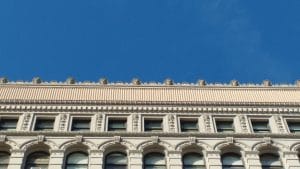 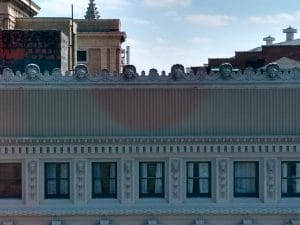 The Main Street side and the Washington Street side are mirror images. Minerva, the Roman Goddess of wisdom & war, and Mercury, the Roman god of travel & commerce appear above the elaborate entrances on both of those sides of the building. 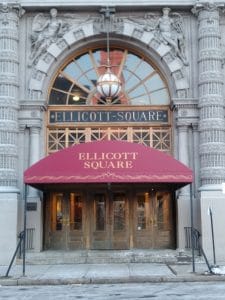 The interior is nothing short of magnificent.  The building is referred to as a square doughnut design because the first two floors are open to an incredible skylight, which admittedly needs work both inside and out. The courtyard underneath the skylight is beautiful with elegant staircases on either end leading to the second story retail spaces and offices above. 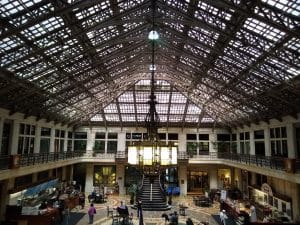 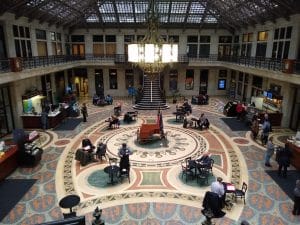 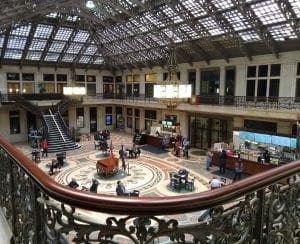 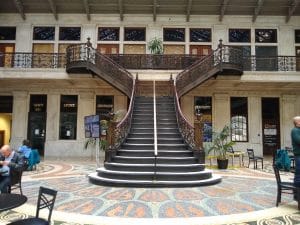 The elaborate elevator doors were added in 1926 and the panels show the history of Buffalo, the top four panels depicting pre-industrial Buffalo, and the bottom four show a more modern industrial Buffalo.  The almost unbelievable mosaic floor was added in 1930, created from 23 million individual pieces of Italian marble. It was designed by Winthrop Kent & James A. Johnson, and includes compass points in the center of the court, with depictions of sun symbols from civilizations around the globe spanning out to the four corners. 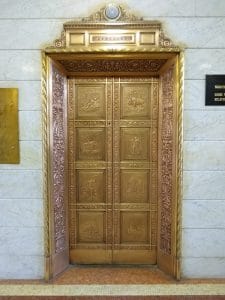 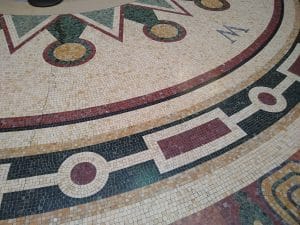 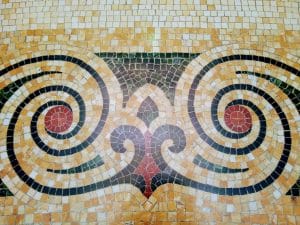 The Ellicott Square Building was billed at the time as the place you could get two days worth of work done in one day.  You see, the idea of having so many retail shops in one office building, referred to now as mixed use, was a very new idea in 1896.  It was a time when most office workers went home for their noontime meal. Or left in the afternoon for a haircut and a shave. Or to pick up that special something for that special someone.  All that took time away from their work.   In the Ellicott Square Building, all of those places were now contained within the same space.

Ellsworth Statler (of the famed Statler Hotel chain) had a restaurant in the building.  He advertised heavily and brought people in to the 500 seat restaurant by placing $5 gold coins in five random bowls of ice cream each day. He contributed to the changing dynamic of downtown Buffalo by keeping people downtown during the lunchtime hour. His restaurant operated in the building until 1940.

I should add here that the reason I am writing about the Ellicott Square Building is by the suggestion of my Aunt.   She worked in the building in the early 1970’s and fondly remembers her time there working in such beautiful surroundings.  She remembers being very conscious of the quality of the building materials used to make it last as long as it has. She also fondly remembers eating at Brinkworth’s restaurant in the southwest corner of the lobby.  Apparently their soups and their open faced Reuben sandwiches were as memorable as the surroundings.

Restaurants were only a part of what was going on in the building in 1896.  Brothers Mitchell and Moe Mark opened the world’s first dedicated movie theater in the Ellicott Square Building in October of that year. Previous to this theater, movies were only shown in traveling shows in lecture halls and vaudeville theaters. This was the first cinema designed as a moving picture theater.  It was reportedly very opulent, with a white & gold color scheme, was carpeted in rich velvet and featured elaborately carved woodwork. People who paid the fee, which in the beginning was 3 cents, would be shown a series of short clips that were roughly one minute long.  In the first year alone, Mitchell Mark stated that 200,000 people came through its doors. 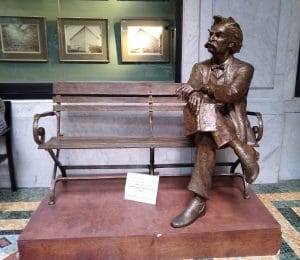 Statue of Mark Twain (aka Samuel Clemens, who lived in Buffalo for a short time) in the courtyard.

While inside the building now, with my eyes wide open, I feel the rich history here.  I feel the Italian tile floor beneath my feet, the beautifully worn marble on the stairs, the intricate wrought iron work on the railings, the huge skylight, the brass elevator doors…and the energy.  The place is bustling. But there are people sitting at the tables, relaxing, taking it all in as well.

They are enjoying lunch at one of four food stands (delicious food I might add!).  There is a barber shop (it’s considered cool to go to a barber shop these days), doctors, lawyers, a dentist, a gym, real estate companies, a bank, several shops, NYS offices, and the list goes on and on.

Ironically, the present owner of the building is the Ellicott Development Company, which is owned by Carl Paladino, who is no relation to Joseph Ellicott or his heirs. 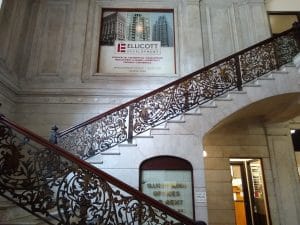 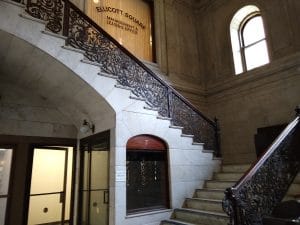 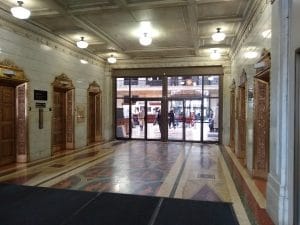 It’s pretty cool that today, almost 125 years later, this building is still incredible and still being used for the same basic vision the Ellicott Company had when they first built it.  A mixed use office building with retail space to serve the people who work in the building and the surrounding downtown area.   My aunt with her story of working in the building, made me think about how many people have passed through the revolving doors at the entrances and have spent time enjoying the wonders that are the Ellicott Square Building.   Aunt Judi, let’s go to lunch there together soon!

Check it out next time you’re downtown, maybe grab a bite to eat on your lunch hour, or do a little shopping, or get a haircut, or…