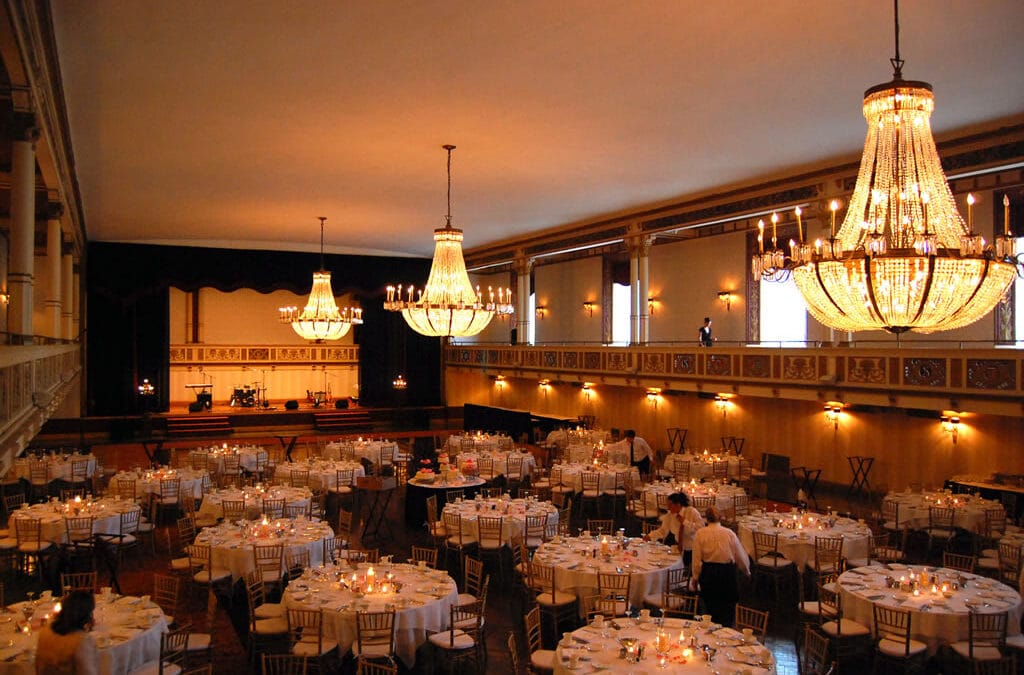 About a year ago now, I had a conversation with my grandson, Miles, about my work. He’s 12. We were scrolling through some of my posts, and he asked if I had written about the Statler Hotel. It was apparently his favorite building in Buffalo. I admit to being surprised. When I asked him why, he said it was because he learned about the Statler when he was in first grade. And that, to him, it seems amazing to own a huge hotel like the Statler. The subject came up with him again recently, and, well, here we are.

But there is more than one story to be told when writing about the Statler Hotel in Buffalo. Because there were two Statler Hotels in Buffalo. And in order to tell those stories, I have to tell you a bit about Ellsworth Statler, the man behind the building of one of America’s first hotel chains. So, this will be three stories in one.

Before we discuss the hotels, let’s talk about Ellsworth Milton Statler. He was a very interesting man indeed.

He was born in Somerset County, Pennsylvania. When he was young his family moved to Ohio, just across the Ohio River from Wheeling, West Virginia. At the age of 9 he went to work tending furnace fires at a glass factory. Statler began his career in hotels at the age of 13 as a bellboy for $6/month, board and tips. At 15 he was promoted to head bellman. Ellsworth set about learning bookkeeping and by 19 he was made hotel manager. A hotel manager at 19! Talk about a go getter. Can you imagine?

Not the type to let grass grow under his feet, Statler leased the hotel’s billiard room and made it profitable with the help from his younger brother who had become an expert at the game. Ellsworth arranged for tournaments where his brother, Osceola, would win time and again. People began to come from miles around to challenge the young pool shark.

Eventually, Statler used the profits from the billiard room to purchase a bowling alley. There, he doubled the four lanes to 8, and added a billiard room of his own. He organized a city wide (Wheeling, WV) bowling tournament with a grand prize of $300 to the winning team. It was a hit, and bowling quickly became one of Wheeling’s favorite pastimes. He set his mother and sister up making and serving meat pies and sandwiches at a white linen type restaurant in town as well.

By the 1890’s, Ellsworth’s brother Osceola was managing the billiard room. His brother Bill was in charge of the bowling alley, and his mother and sister, Alabama, were successfully running the restaurant. All of this netted Ellsworth a neat $10,000 a year. That would be just over $280,000 today. Not bad for a man of about 30 years old.

But Ellsworth had a dream. He wanted to open a hotel. A big one.

As it happened, Statler had occasion to pass through Buffalo on his way home from a fishing trip in Canada. While here he noticed the construction of the Ellicott Square Building. He heard the building’s owners were searching for a tenant to run a full service restaurant inside the building. Ellsworth saw the potential and jumped at the chance. You see, Buffalo was growing to be one of the largest cities in America at the time.

Ellsworth saw it as a stepping stone to that hotel he wanted. So, in 1896, Ellsworth moved to Buffalo and opened the Statler Restaurant in the Ellicott Square Building. Technically Statler #2, but we’re only talking hotels today. The restaurant was a huge success.

For the Pan American Exposition in 1901, Ellsworth built and ran a hotel very near the grounds of the Expo. The temporary wooden structure had just over 2,000 rooms. He was one of the few in Buffalo who netted a profit on the Exposition, albeit a small one. He did the same thing at the 1904 St. Louis World’s fair, but this time profited to the tune of roughly $360,000 (about $10 million today).

Neither of these hotels were permanent. When Buffalo hosted the Pan American Exposition, almost all of the structures were designed to be easily disassembled. That way, the land could be returned to its original state. We now know that an awful lot of that land was never returned to its previous state, but, that was the plan at the time. So a temporary hotel was seen by Statler as a way to invest, learn about building a hotel, and make some money along the way. And he most likely hoped to parlay the profits into his own dream of a permanent hotel.

Statler had a clear vision for what he thought a hotel should be.

It’s important at this point to note that hotels at the time were quite different than they are today. Even the best hotels had shared bathroom facilities. Guests were charged extra for hot water. A typical room was furnished with a bed, a straight back chair and a hook on the door to hang clothes. Some owners only considered their hotels at capacity if every double bed had two people booked into them, and would at times book strangers into the same double bed. Can you imagine?

But you see where I’m going here. More thought was given to profits than to the comfort of the guests.

Statler wanted to make his guests comfortable. It was his belief that a regular Joe needed the same things as a traveling prince did in a hotel room. And he planned to give it to them at an affordable price.

With his profits from the temporary hotels, Ellsworth Statler built The Buffalo Statler hotel on the southeast corner of Washington and Swan. Now the site of the edge of our ball diamond. This was 1907.

Surprised? Did you think I was going to say he built the hotel on Niagara Square? Stick with me on this one. We’ll get to that.

Seeking an edge on competing hotels, Statler designed what is called the ‘Statler plumbing shaft’. It allowed for bathrooms to be built back to back, enabling each hotel room to have its own bathroom facilities. This was unheard of at the time, but is commonplace today. He advertised with the slogan ‘A room and a bath for a dollar and a half’. This was affordable at the time. And food was included!

A Note About Statler’s Hotels

Now, the Buffalo Statler was not considered a luxury hotel by any means. By design. But they were comfortable. Statler also impressed upon his staff that the number one rule of working in his hotel was service. Above all else, give good service to every guest no matter what.

Well, guess what? It worked. The Buffalo Statler was wildly popular. And why not? Everyone wants to be treated well. Especially when you think of how difficult travel must have been at the time. To stay at a hotel where you were treated properly must have been a great comfort to weary travelers.

Up until now all hotel owners cared about was the bottom line. Profits. Statler revolutionized the way hotels were run, as it turns out, across America. Because as we all know, Statler didn’t stop with one hotel. He went on to build other hotels in other cities, all with the same philosophy. Some of which are still being operated today. His chain of hotels is reputedly the first of its kind in America.

But he also came back to Buffalo, as you well know.

What’s Next? Buffalo Statler #3 of Course

In 1923, Statler built another hotel in Buffalo. He changed the name of the original Statler (above) to the Buffalo Hotel, and called this one the Hotel Statler. This is the building on Niagara Square that we all know.

This hotel had everything you could want in a hotel for its day. A ballroom, a lounge, four dining rooms, a tea room, a swimming pool, a turkish bath, and a barbershop. Multiple presidents stayed here. Anyone who was anyone, if they came to Buffalo, they stayed at the Statler. It was Buffalo’s most elaborate luxury hotel at the time, and remained “the” place to stay and lavishly entertain in Buffalo for decades to come.

But Ellsworth Statler would not live to see those decades. He passed away in 1928 at the age of 64.

As a result, his second wife, Alice, carried on with Statler Hotel Company until 1954, when she sold out to Hilton Hotels for a cool $111 million. To that date, it was the largest hotel merger and also the largest private real estate transaction in history.

An Uncertain Future for #3

Shortly thereafter, the hotel began its long, slow transition to offices. The hotel itself closed completely in 1982, but the offices, lounge and banquet halls remained open. The name was changed to The Statler Towers. After a failed attempt by Bashar Issa to renovate the building into a hotel and condos, the building went into bankruptcy. In 2011, Buffalo real estate developer Mark Croce purchased the building. He rebranded the building as Statler City and immediately began renovations. It was a huge job, and progress was slow going. Banquet facilities opened, but not until 2016. But boy are they beautiful!

Sadly, Croce did not live to see his dream for the Statler completed. He was killed in a helicopter crash on January 10, 2020. It is not clear what will happen to the Statler building at this point in time.

In the news today, Buffalo developer Douglas Jemal has an agreement in place to purchase the Statler City. This is his third acquisition downtown. He is in the process of redeveloping Seneca One Tower to mixed reviews, and is awaiting approval for his plans for the former Buffalo Police Headquarters on the southwest corner of Church Street at Niagara.

Time will tell how Jemal’s vision for the Statler Building looks. In the meantime, I remain hopeful.

Ellsworth Statler was really the father of the modern hotel industry. Through his many innovations, hotels are run completely different now. He was the first to offer bathrooms with bathtubs in every hotel room with both hot and cold water at no extra charge. The first to offer telephones and radios in every room. Desks with electric lamps, outfitted with stationery and pens for guests use. And many more… We take it for granted, but these were all new and innovative at the time he implemented them.

If you think about it, it all boiled down to service for the guests. Which was always Statler’s priority. By all accounts, in all my research, he also treated his staff well. He understood that if he respected them, paid them well, and treated them well, they would want to do well for the guests. And that, in my humble opinion, was the genius behind Ellsworth Milton Statler. You see, he never got too big for his britches. I once read that no matter how wealthy he got, he still always wore $20 suits and $4 shoes. That is a man I would have liked to have known.

I hope to one day see his legacy live on in Buffalo, so that I can show it to Miles.