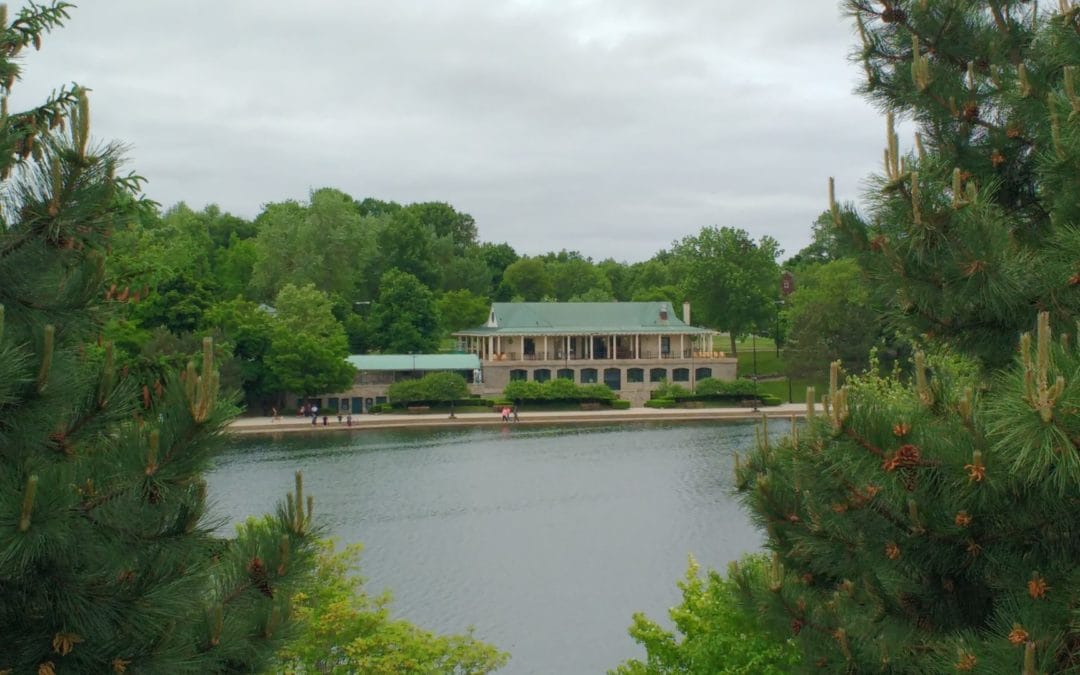 Delaware Park was designed for the city of Buffalo in 1868 by Frederick Law Olmsted and Calvert Vaux. In the mid 1800’s Buffalo was growing by leaps and bounds and some of the movers and shakers wanted a park that rivaled New York City’s Central Park. It too was designed by Olmsted. So he was brought to Buffalo to give us our own ‘Central Park’.

Shortly after he arrived, Olmsted was given a tour of the city. He felt the design of our streets was conducive to a park system instead of just one central park. He and Vaux convinced city leaders to put in the system. And boy, am I glad they did. It was to become the most ambitious park system in our country, with Delaware Park (originally called simply ‘The Park’) as it’s crowned jewel.

There are two buildings in the park that are still readily accessible to the general public, and I’d like to take a look at both of these today.

Let’s begin on the water side of the park with Marcy Casino. And let’s start before Marcy Casino was built. Originally, Calvert Vaux designed a boathouse in 1874 that was located where Marcy Casino now stands. That is, on the south side of Hoyt Lake east of Lincoln Parkway. The boathouse was a very popular spot for Buffalonians in summer and in winter. Remember, this was when skating was allowed on the lake in the winter months. So the boathouse was used all year round. Just look at that design, it must have been a sight to see! And an exceptionally pretty place to relax and enjoy the view.

Oh, to be able to time travel. I’d definitely put myself there on a beautiful summer afternoon in say, 1890.

Unfortunately, the Boathouse burned down in 1900. Seriously, Buffalo lost so many beautiful buildings to fire. This is another one.

The Pan American Exposition was set to take place in 1901, and Delaware Park was to play a big part in the festivities. So Buffalo’s most prolific architect, E.B. Green, was brought in to design another building to replace the former Boathouse. True to form, Green designed a beautiful building. The Casino proved to be just as popular as the original Boathouse.

In 1961, for whatever reason, the entire interior of the building was ‘modernized’. It no longer reflected the style of either E.B. Green or Calvert Vaux. I will never understand how these decisions get made. In any case, in 1990 it was returned, not to the original design, but to reflect the original style of the building. For this, I am grateful.

William Marcy served as the Delaware District City Councilman from 1978 – 1983. The building was renamed for him, both for his devotion to Buffalo and to the casino itself.

I have always loved the look of Marcy Casino. There’s a good reason E.B. Green was one of Buffalo’s most successful architects. Pure talent.

If you visit, don’t forget to check out Delaware Park’s Rose Garden, a gorgeous little gem, just south of Marcy Casino. Take a stroll down Shakespeare Hill, directly east of the Rose Garden. Continue on the path around Hoyt Lake. You can’t get lost, except in your own thoughts. It’s a great place for that.

Nowadays, there is a restaurant inside the casino called The Terrace. If you haven’t been there, you should check it out. From the terrace, you can enjoy one of the best views in Buffalo. Sit outside, close your eyes and daydream about being in the original Boathouse, in 1890.

The Parkside Lodge in Delaware Park

The other building that is readily accessible to the public in Delaware Park is the Parkside Lodge. This building is on the east side of the park, with an address on Parkside Avenue. The Lodge was not a part of Frederick Law Olmsted’s original plan for the park. But a golf course in the middle of the meadow wasn’t either. We could discuss the golf course pros and cons at length, but not today. Today we’ll discuss the golf course only as it relates to the Parkside Lodge.

Before the Lodge was built, the golf course was put in, and was well used from the beginning. And in 1912, the lawn bowling greens were put in. That’s the area surrounded by wrought iron fencing just to the south of the Lodge. You see, apparently lawn bowling was a big thing shortly after the turn of the 20th century. In 1909, Buffalo had formed a lawn bowling league, and they played in Delaware Park. In fact, not long after the greens were completed, the International Lawn Bowling Association held it’s first tournament in the park. Interesting.

Sometimes, ‘interesting’ is what I say when I can scarcely believe something. I’ve never really thought of Buffalo as a lawn bowling kind of town. Come on now, you were thinking it too. Hey, I’m a firm believer in “don’t knock it till you try it” so maybe I’ll give it a try. You never know, I may bring it back!

A “Shelter” is Built

In 1913, it was clear the lawn bowling greens and the golf course needed a shelter to support their activities. The building we now know as the Parkside Lodge was built in 1914, and is a really nice example of Arts and Crafts design in architecture. I happen to love arts and crafts design. And I think Olmsted would approve too. (Not of the golf course. But, not today.)

Before I get into the lodge itself, let’s talk about the quarry that used to be in the park. Yes, you heard that right. There used to be a quarry in Delaware Park. As a matter of fact, some of the original buildings in the park were built with stone from this quarry. It was close to Parkside Avenue, between the parking lot closest to the 198 and the basketball courts. Olmsted created a ‘quarry garden’ and worked it into his plan for the park. The first time I saw a photo of the quarry garden, I had that feeling like I missed out on something. It’s the type of thing that you can’t really imagine without actually seeing it. And like all amazing things, photos I’m sure don’t do it justice. Here’s one anyway.

In these days of social distancing, we can still head over to Delaware Park for a walk, or a bike ride. Walk around Ring Road and take a look at the Parkside Lodge as you pass by. Better yet, walk over and take a closer look now that you know all about it! On a side note, the real name of Ring Road is actually Meadow Drive. (!)

When you do, notice that in front of the Lodge there are two ‘bridges’ that appear in the grass along the path. I’ve read these were originally bridges over the quarry, and when the quarry was filled in, they were left to add interest to the winding pathway in the grass. More recently I’ve read they were added after the quarry was filled in. Whichever it is, I find them to be charming in that setting. They add to the overall feel of the place.

And that is the feel of a time gone by, filled with tons of historic charm. With the dark woodwork and big fireplace. You can almost picture the lawn bowlers and golfers in 1914 enjoying drinks on the patio after a match. Both men and women, by the way. Women had the freedom to enjoy both in 1914 Buffalo. That’s the upside. The downside is that it was mostly the upper echelon who were able to enjoy both of those games in Delaware Park. We can be glad that’s changed, if only somewhat. I fear that golf will always be a sport of the privileged class. But lawn bowling on the other hand…that we could bring back.

Marcy Casino on the west side of the park, and the Parkside Lodge on the east side, are both two Buffalo treasures hiding in plain sight. Go see them on one of your quarantine walks. You’ll be glad you did. Helpful hint: Park on the Ring Road side of the park and walk Nottingham Terrace to cross the pedestrian bridge over the 198 and go see Marcy Casino. Then proceed around Hoyt Lake and head back to Ring Road to see the Parkside Lodge. Might take you a couple of hours if you take your time, but it’ll be beautiful, and you’ll sleep like a baby that night.