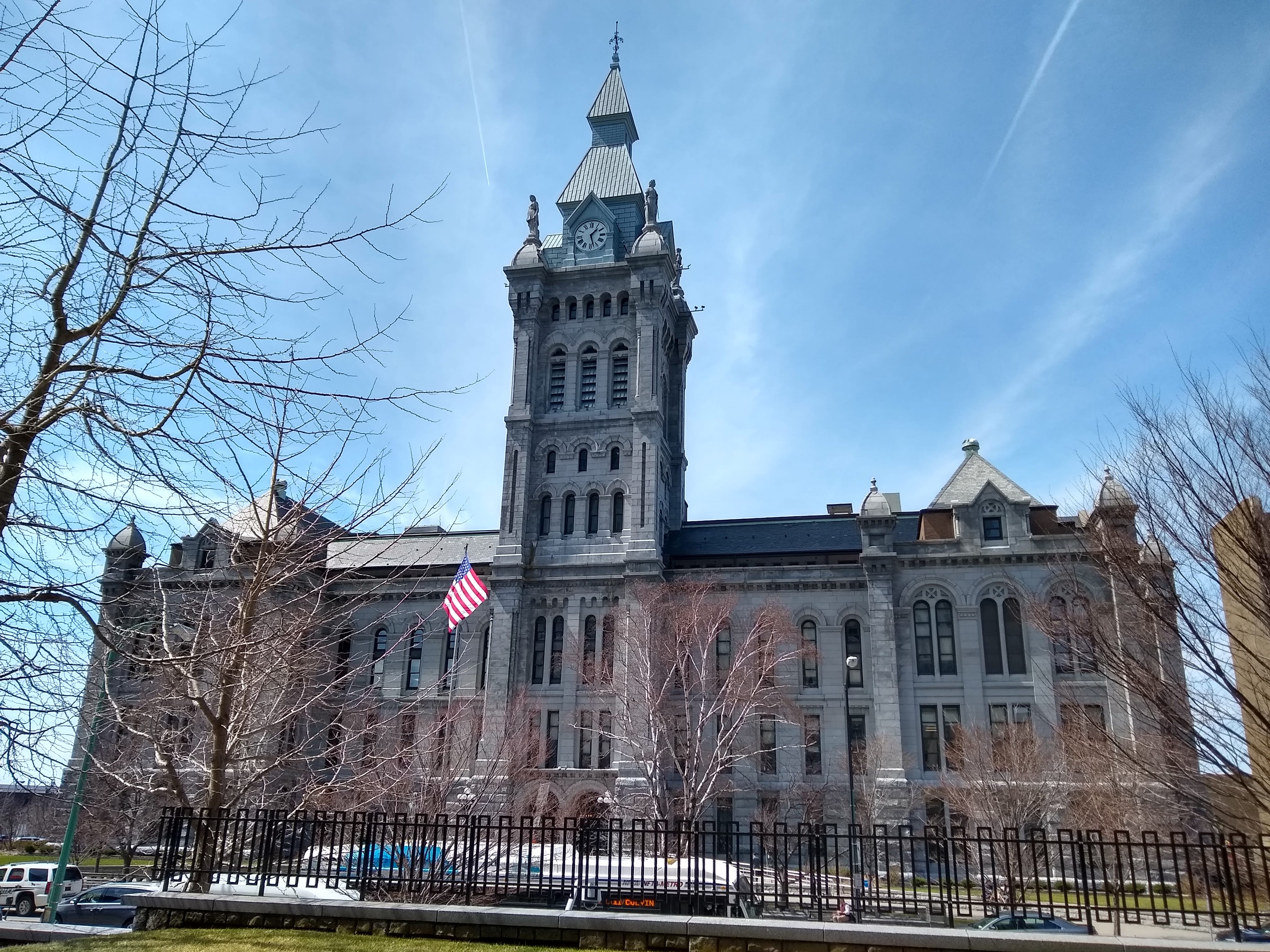 Several years ago I worked in the Seneca One Tower (then the HSBC Building).   One lunch hour I walked over to city hall for a tour with my sister, who had her office there at the time. On the way I passed by the Old County Hall.   The last time I even noticed this building was when I had Erie County jury duty roughly a month after 9/11/2001.   While waiting to be called for selection, there was a bomb threat and we had to evacuate the building.   Probably why I never noticed the incredible architecture the building holds.   And since then, I’ve learned a lot of the equally incredible history of the building as well.

The story of this building begins in Buffalo’s earliest days.

It was built on the site of Franklin Square Cemetery, which was one of Buffalo’s first burial grounds.   The cemetery operated from 1804-1836, and primarily held the war of 1812 dead, but civilians were buried there as well.

It was also on this site on December 10, 1813, that Colonel Cyrenius Chapin surrendered the village of Buffalo to the British. The British rejected his authority to do so, and proceeded to burn the entire village, leaving only four remaining structures. They did this in retaliation for when American forces burned the British settlement at Newark (now Niagara on the Lake) in Canada.

The property at the northwest corner of Franklin and Church was purchased by the city in 1851 from Hiram E. Howard. The land was used for the Mayor’s office and other city offices until shortly before the City and County Building was completed in 1876. 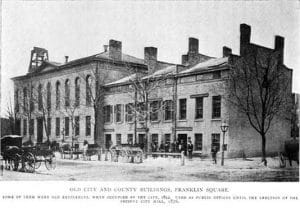 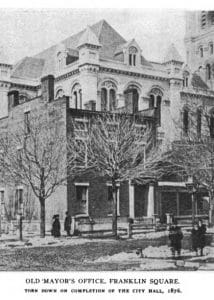 The bodies from the adjacent burial ground were moved to Forest Lawn Cemetery in 1852.

In 1857, Seth Grosvenor left the city $40,000 to be used for a library. The property was strongly, yet unsuccessfully, proposed for the library. Had that proposal been successful, I very possibly would not be writing this post.

The building was a joint effort of the City of Buffalo and Erie County to house all the government offices under one roof.    It was built between 1871-1876. 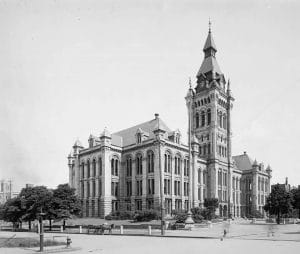 The architect was Andrew Jackson Warner, who was arguably Rochester’s most famous architect. He was also the supervising architect for the Buffalo Psychiatric Center, now The Richardson Olmsted Complex.

Warner described the style as Norman, referring to Romanesque architecture in England. It is generally described as High Victorian Romanesque or simply Norman Romanesque. The style is evidenced here by the use of rounded arches in the windows and entrances, and the use of piers instead of columns. 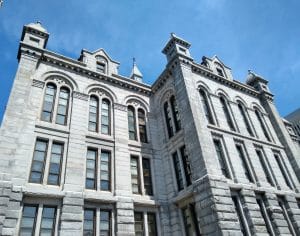 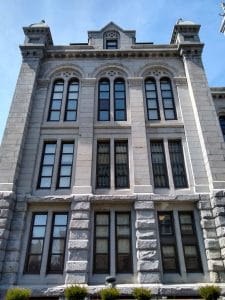 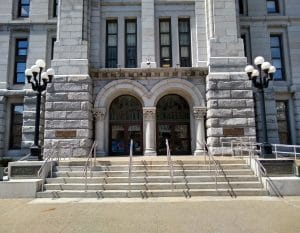 The center of the building is dominated by the 270 foot tall clock tower. The clock itself was backlit by reflected gas light, which was lit each night by the clock mechanism itself. This was quite possibly the first use of an automatic pilot light. The tower reportedly became a destination for evening walks and carriage rides. You can imagine that seeing a clock tower lit up at night was a sight to see in 1876, especially 270 feet in the air! Think about it, when it gets dark today, we have so many lights that stay on. It never really gets too dark. In 1876, when the sun went down, it got dark. The clock tower must have been a real beacon in the night! 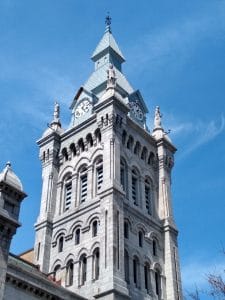 Resting on the tower are four, 16 foot tall, stylized female figures, each carved from 30 ton blocks of granite.   Each is slightly different, representing Agriculture, the Mechanical Arts, Justice and Commerce respectively.   They were sculpted at Clark Island, Maine, by an Italian immigrant, Giovanni F. Sala. 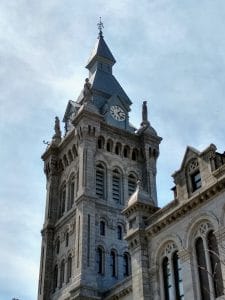 Interesting little tidbit about the sculptures.   In 1974 they were removed to repair their pedestals.   On the day Agriculture was scheduled to be hoisted back up to its spot, a crack in her base was noticed requiring additional repair time.   The team went ahead and put Commerce into the southeast corner, the spot where Agriculture belonged, because the placement of the crane that day necessitated it.   When Agriculture was properly repaired, she was placed in Commerce’s spot.   When the error was noticed, the public works commissioner at the time, Edward Umiker was very upset, but it was eventually decided that it wasn’t worth the time and money to switch them back.   There they will apparently stay. 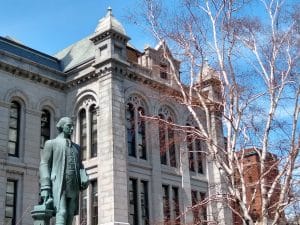 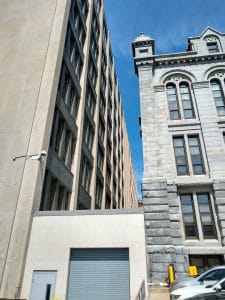 In 1882 Grover Cleveland became the mayor of Buffalo.   He had his offices in the building, before moving on to become Governor of New York State and eventually the President of the United States.

In 1891, a tunnel was built connecting the Erie County Jail on Delaware Avenue and County Hall, providing safe and simple prisoner passage to the courts.   The tunnel is still in use today.

President William McKinley lay in state in the building after being tragically assassinated at the Pan American Exposition here in Buffalo in 1901. To commemorate this, there is a bronze plaque in the floor of the lobby where his body lay, and an American flag stands watch where the spot is cordoned off by ropes.

Also, McKinley’s assassin, Leon Czolgosz, was tried in this building. It seems likely that Czolgosz walked that tunnel between the Erie County Jail and the County Building. His trial was reportedly very quick, not more than a day or two, and he was also sentenced to death in the building. 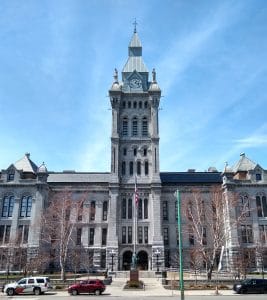 In 1932, both the city and the county offices had outgrown the building, and the City of Buffalo offices moved into their new (at the time) and now current home on Niagara Square.

The Old County Hall Building is an official Buffalo Landmark and was added to the National Register of Historic Places in 1976.

It is still functioning as a County building to this day, housing Erie County Courts and Records. If you live in Erie County, and get called for County Jury duty this is where you’ll go. If you do, don’t make the same mistake I did.   Take a moment to take in your surroundings, and really look at the treasure that is Buffalo’s Old County Hall.   Check it out on Franklin Street at Church.

Hope you enjoyed my story of   The Old County Hall.   Subscribe here and never miss a post!