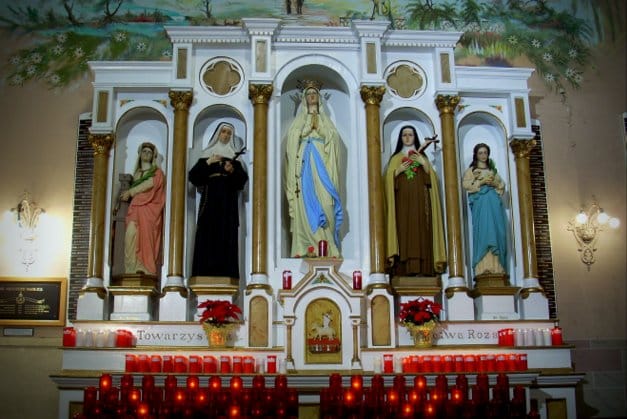 Thank you for joining us for another “church visit” in my series about the Holy Thursday Tradition of Visiting Seven Churches. If you missed my introduction post explaining all about the tradition and my interest in it, you can access it here. I’ll list the links to the other posts in this series at the end of this article.

In the introduction post on Thursday, I mentioned that visiting the seven churches is an old family tradition for me and St. Adalbert’s is one we always visited back in the day. Which explains why I’ve included it here.

St. Adalbert’s was the second church built in Old Polonia in Buffalo, St. Stan’s being the first. This was during the same time that St. Stanislaus was growing by leaps and bounds. Remember that St. Stan’s eventually had 20,000 members!

There is some evidence that there were factions of St. Stan’s congregation who were not big fans of the longtime pastor, Rev. John (Jan) Pitass. St. Adalbert’s website mentions it; St. Stan’s does not, although they do mention the building and opening of St. Adalbert’s. Whether it’s true or not, the fact remains that many parishioners in the area were unhappy with the crowded conditions of St. Stan’s. Not to mention that many parishioners had to travel upwards of two miles to attend mass. Not so easy for people who were forced to walk. Especially in winter.

Trouble from the Beginning

From the beginning though, parishioners of St. Adalbert’s were known for their infighting. Their early history is fraught with discord over land ownership, specifically whether the diocese owned the property or whether the parishioners did. They didn’t like that their first pastor, Rev. Anthony Klawiter, was first an associate at St. Stan’s, and therefore they assumed he was under the thumb of Fr. John Pitass, which of course they took exception to. And, they fought among themselves over all sorts of matters.

Nevertheless, the congregants themselves built the first wooden building on the site, referred to as ‘The Little Chapel’ and it served as both church and schoolhouse. While building the chapel, the parishioners realized it needed to be larger. As a result, they acquired more land and began a combination building even before they celebrated their first mass in the Little Chapel. This was in September, 1886. The newer, larger church was dedicated in April 24, 1887.

Fr. Klawiter had a master plan for the church. He acquired even more land and hoped to build a home for the elderly as well as a park. But in 1889 a fire which destroyed the church resulted in the abandonment of that plan. It is said that the relationship between Klawiter and the congregation had gotten even worse, and he left St. Adalbert’s at that time.

A Succession of Pastors

St. Adalbert’s went through a succession of pastors over the next several years, but managed to build the church we know today. It was dedicated in July of 1891. No small feat amidst the infighting that continued to take place among the parishioners.

Jozef Mazur, a local artisan painter, decorated the interior of the church.

In March of 1895, the Rev. Thomas Flaczek arrived as new pastor. A faction of the congregation greeted him by removing all the doors and windows of the rectory. In March! Can you imagine? Flaczek retreated to St. Stan’s where he directed the affairs of the church until July of that same year, when that faction broke away from St. Adalbert’s, the diocese and the Pope by starting their own church, Holy Mother of the Rosary Polish National Church.

Finally the congregation and Fr. Fraczek settled into a peaceful existence. A school to accommodate 1000 students was built, as was a new rectory. In 1907, Pope Pius X elevated St. Adalbert’s to the rank of minor basilica. There is not much information out there about why the Pope made his decision to do this, but there is no dispute that he did it, as the letters are on display in the church museum. It was the first church given this distinction in the country. Another Buffalo first. Cool.

The Decline of St. Adalbert’s

At this point, I’m sure you know what’s coming. After the Second World War, the declining populations of mid-size cities like Buffalo is well documented. Once overcrowded church pews sat largely empty on Sundays. Between 2005 and 2011, the diocese either closed or merged over 100 Catholic churches. St. Adalbert’s was among the mergers. They were to close and merge with St. John Kanty Church on Broadway.

The congregation appealed directly to the Vatican. It took four years, but Pope Benedict made the decision that the congregation would merge with St. John Kanty, but the church would remain in the diocese as an oratory. My understanding of an oratory is that it’s a place which is kept for special occasions such as weddings, funerals, or special masses. This is where it stands today.

According to their website, the last mass to be held at St. Adalbert’s was Christmas Eve, 2019. I’m am quite sure they would have been open for Holy Thursday visits if not a mass of the last supper, and for the Triduum, had all the churches not been closed due to the coronavirus. Which everyone reading this knows all too well.

When the school closed in 1985, the Felician Sister’s who ran it, embarked upon a new form of pastoral care – The St. Adalbert’s Response to Love Ministry, which serves the entire neighborhood.

In 2016, the parish rectory was transformed into the Mother Teresa Home. It is a refuge for pregnant women and is run by the Diocesan Office of Pro-Life Activities.

Since I was a little girl, I have always loved the icon pictured below. Note the crossed keys towards the top. It signifies the church as a basilica.

The church itself makes me feel warm and welcome. Which is how I feel about St. Adalbert’s overall. I was very surprised to learn about the early infighting that took place here. Although I did know about the founding of the Polish National church in Buffalo. I have a great uncle who was disowned for marrying a girl who was a Polish National. I never met him. So, all the infighting is believable to me. Stubbornness runs deep in some people.

Stop at St. Adalbert’s on a special occasion when you can. It’s located at 212 Stanislaus Street in Old Polonia, in Buffalo.

So, I think tomorrow we’ll visit St. John Kanty to see where all the good people of St. Adalbert’s ended up.

Read the Other Posts in this Series