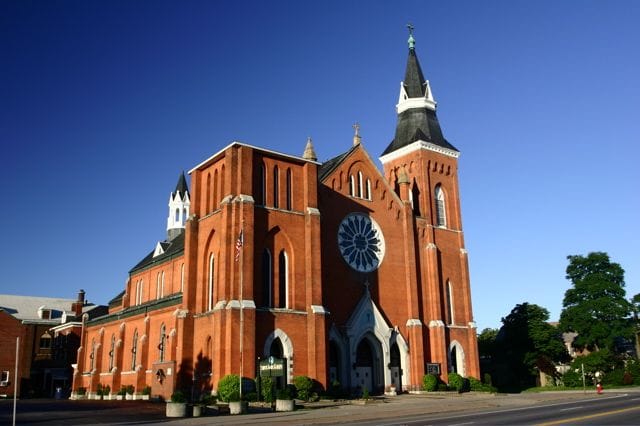 Welcome to the fourth of seven “church visits” in my series about the Holy Thursday Tradition of Visiting Seven Churches. If you missed my introduction post explaining all about the tradition and my interest in it, you can access it here. I’ll list the links to the individual church posts at the end of this article.

Our fourth virtual visit is to St. John Kanty Church, and this church also has its roots in the heart of Old Polonia in Buffalo.

It is in fact another church whose congregants were originally parishioners of St. Stan’s. Again, when the railroads cut through the east side it became dangerous for parishioners to travel from the outer reaches of the parish to St. Stan’s. The diocese acquired a parcel of land at the corner of Broadway and Swinburne, and St. John Kanty was born.

Now, there is some discrepancy as to who served as St. John Kanty’s first pastor. A history of the parish by James Napora reports the first pastor as Fr. Adalbert Sulek, who was an associate at St. Stan’s. Napora goes on to say that Fr. Sulek oversaw the building of the church, and when it was completed, he turned his attention to the building of a school.

The St. John Kanty website states that the first pastor was Fr. Thomas Flaczek (later of St. Adalbert’s Basilica) from 1892 – 1895. I found an article in the Am-Pol Eagle by Gregory Witul which explains that Fr. Sulek was assigned to St. John Kanty, but that he was transferred to a parish in Dunkirk during the construction of the church.

I don’t think I’m going to be able to solve this mystery during this series. But I am intrigued, and will probably spend way too much time trying to figure it out later on. I welcome any information you may have. Please feel free to contact me at the email address listed above.

By 1910 however, the poverty in the area was showing it’s effects. It was well known that the neighborhood was practically out of control with crime. As many as 15 active gangs of railroad thieves operated in the area. They fought each other for supremacy, but were known to band together against the police in gun fights! So many local boys from this neighborhood were sent to the Elmira State Reformatory, that it became known among locals as the East Buffalo Prep School.

Enter Fr. Gartska. Once in awhile, when I am writing the history of a building, in this case a parish, a person shows up in the history and sort of takes over the story. For St. John Kanty Parish, that person is Fr. Andrew S. Gartska.

Having heard about the state of the neighborhood before he arrived, Fr. Gartska immediately planned a parish lawn fete. It was a wild success socially, but unfortunately, he lost money on the event, because all the people who volunteered to work it stole all the money! Can you imagine?

The next thing he did was hold regular dances in the school hall and charged a nominal fee. This was in an attempt to keep the teenagers out of the local gin mills and pool halls. It worked. To a point. When Fr. Gartska heard that many young girls were still going to the bars instead of the dances, he set out to find out why. It quickly became apparent the girls were embarrassed by their clothing, and it wasn’t so obvious in the dimly lit bars. Fr. Gartska immediately hired a dressmaker to give free sewing lessons in the school hall. Girls, and women, came in droves to learn. And the young girls began attending the church dances.

The local bar owners came to complain to Fr. Gartska about losing customers due to the church dances. Instead of arguing about teenagers hanging out in gin mills, he commiserated with them about business and what a struggle it is. He asked for advice on running the parish. Then he asked them to help him form a Businessmen’s Committee. Flattered, they obliged.

What to do about the Gangs?

Next, Fr. Gartska took on the gangs. He arranged with the railroads to use their yards as a playground. He invited the leaders of the gangs to represent the neighborhood in a city wide league. Perhaps looking at it as a way to rule the entire city, they agreed, and they took the city championship that first year. But not before Fr. Gartska had the boys in church every Sunday morning praying for a win that afternoon. He also held team meetings on Saturday nights in the school hall. The boys naturally joined the girls for the dances after the meetings.

There were 40 some clubs and committees active at St. John Kanty’s during Fr. Gartska’s days at the church. These included adult education classes in english, local craftsmen taught their trades to young men, and cooking classes for the women, and many more. Perhaps it is from those cooking classes that the infamous Pierogi Sales originated?

It all seems a little too good to be true. But that’s the story of Fr. Andrew Garstka. There’s more information about him on the St. John Kanty website, in an article written by Stephen V. Feeley, in The Commonweal, at this link. When you have time, read it. He was certainly an interesting man. His story brings to mind the movie Going My Way with Bing Crosby. Think I’ll look that movie up and watch it tonight.

Buffalo churches seem fraught with fires back in the day. It’s not my imagination right? Maybe it has to do with the candles?

In 1948, there was a minor fire in the church, and repairs were made. But in 1955, a major fire badly damaged the inside of the building. Ten stained glass windows were lost. The sanctuary was almost a total loss, but the sculpture by Frank Pedevilla of the last supper survived. It now hangs at the choir loft at the rear of the church.

Restoration was undertaken and a new sanctuary was built. It is somewhat less opulent, but elegant and beautiful just the same. Jozef Mazur, a local artist who painted murals at St. Stan’s and St. Adalbert’s, was engaged again to paint murals at St. John Kanty. He also created three stained glass windows here to replace some of the windows that were lost in the fire.

Adapting to the Changing Neighborhood

St. John Kanty adapted well to the changing times. As more parishioners moved out of the neighborhood, new ministries were created just as Fr. Gartska would have done.

The school merged with five other East Side schools in 1990 to form Kolbe Catholic Regional School. It was not located at St. John Kanty’s Parish. The Felician Sisters who partially staffed the school from the beginning, embarked upon ministering in a total parish life experience, instead of the traditional teacher role. The school building was renovated to accommodate a senior citizens community center. The Mother Angela Dining Room was established to feed the poor of the neighborhood.

The parish of St. Adalbert’s Basilica was merged with St. John Kanty Parish Community in 2011, but it is unclear how many of their congregants formally joined St. John Kanty’s parish.

And the pierogi sales. St. John Kanty is well known today as the Pierogi parish. We Buffalonians mean no disrespect to the parish and the hard work of all that minister there. But we are a food city, and we LOVE our ethnic foods. Pierogies are definitely a favorite among Buffalo foodies.

In researching this story, I learned a lot. I never knew my fraternal grandmother lived in St. John Kanty Parish when she was growing up. Born in 1917, my grandmother was quite likely one of the girls who benefited from the free sewing lessons instituted by Fr. Gartska. She probably learned her crocheting skills there too. I know my grandparents met at a church dance, and now I picture the meeting taking place at St. John Kanty, but I cannot say for sure. My Grandfather grew up in Queen of the Most Holy Rosary Parish, which was was very close by, so it’s also possible that it could have been there.

Growing up in that neighborhood might account for their toughness though. They were both tough people. Lived through a lot. At the same time, my Grandfather loved to tease us and he always kept us laughing. And my tough Grandmother also loved simple, pretty things like really dainty jewelry and crocheted doilies.

Also, while speaking to my father about the history of the gangs in the area, it was clear that at least some still existed in the late 1940’s & 50’s. He mentioned that when he walked to his grandmother’s house on Rother Street from Northampton, he would walk the long way around to Sobieski Street to avoid the Rother Street Gang, who operated between Sycamore and Walden. Interesting.

I am sorry to admit that I have never attended mass at St. John Kanty, although I have visited many times on Holy Thursday. I guess it never made it into our Lenten ‘mass mobs’ I mentioned in the Introduction Post. Going to put that on my ever growing list of things to do when the lock down ends.

Speaking of the end of this crisis, when it’s over, visit St. John Kanty at 101 Swinburne Street at the corner of Broadway. It’s a beautiful church steeped in the history of the early immigrants of our city. Visit their website for information about their pierogi sales, and mass times.