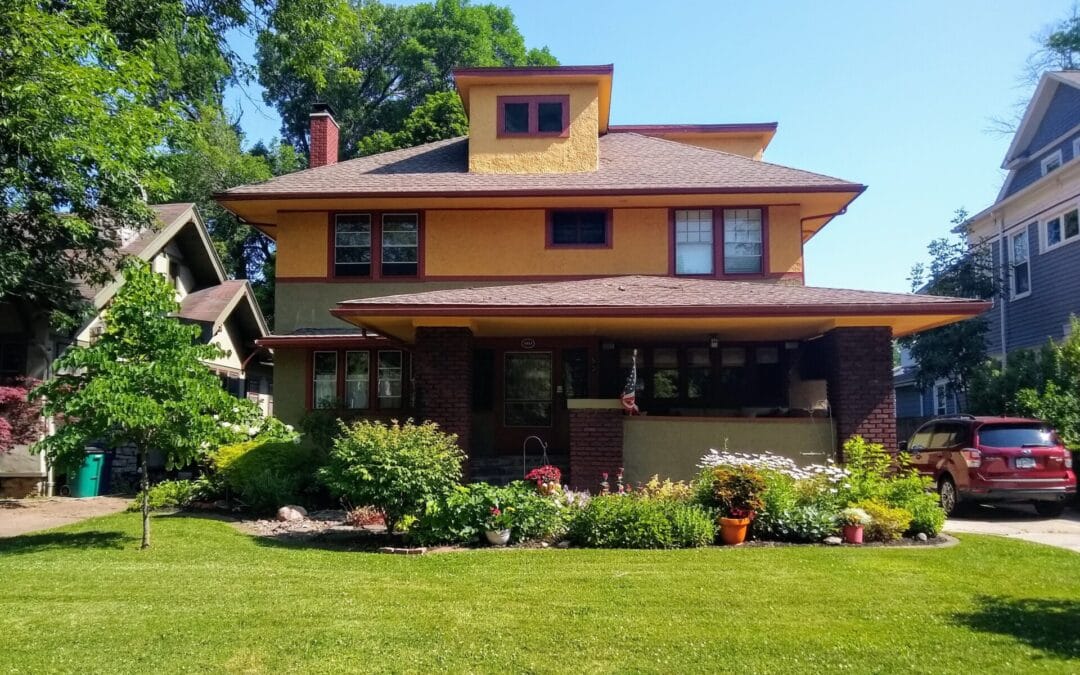 Like a lot of Buffalonians, I spend a good amount of time in Delaware Park. It’s easy to get to and I enjoy the beauty of it. About twenty years ago or so, I headed over to the park for the Corporate Challenge, a 3.5-mile road race that begins and ends at the meadow side of the park. Coming directly from work, I searched for parking and ended up on Tillinghast Place. It was my first encounter with the street. On the way to the park, I didn’t even notice the beautiful homes as I hurried to make it to the start line in time. It wasn’t until a few hours later, while I was leaving, that I noticed them. Wow. I made a mental note to find out more about these gorgeous homes.

I have the best of intentions. Really, I do. It had to be five years later before I looked into anything on Tillinghast. Why is it we spend so much time not doing the things we want to do? I guess life just gets in the way sometimes.

Recently though, I read a short article about Sears Homes. Yes, Sears sold homes through their catalog! I admit that when I read it, I was blown away! We’ve all heard of kit homes. I just never realized that they were being sold via the Sears catalog in the early 1900s!

Sears began selling kit homes in 1908 and continued until 1940. They offered many different styles and a variety of amenities to go with each home. They could be as simple as three-room houses with no plumbing or heating, commonly built as summer cottages, to large, grand homes with french doors, elaborate bathrooms, and many bedrooms. Most kits had a price range instead of a set price. The customer was able to customize flooring materials, kitchen cabinets and hardware, bathroom fixtures, as well as the building materials themselves (ie stone, cedar shingles, brick, etc.).

Sears offered the very latest in home trends as well, including central heating when it first became available. For some buyers, these homes would offer their first experience with indoor plumbing. When drywall was a new product, Sears offered that too, as an option. It made construction easier and less expensive than hiring a skilled plasterer. But if you wanted plaster, Sears would figure out exactly what you’d need, and ship the materials necessary along with the rest of the house. The homes were very customizable.

Tillinghast Place has four Sears homes, and I wanted to see them up close.

Meeting Some Neighbors on Tillinghast Place

At the very first house I stopped to admire, I ran into a woman pulling a few weeds and generally ‘checking the place out’ like homeowners often do. I commented on the beauty of her gorgeous colonial home. She was very friendly and we got to talking about the home and the neighborhood in general. Having lived on Tillinghast for 40 some years, she knows the street quite well.

I told her I was writing a post for my blog and that I was interested in seeing the Sears homes. She hadn’t heard of them. I told her a bit about them, explained that there were four of them on the street, and mentioned a couple of house numbers. Just then, I looked across the street right at a Sears home. She immediately motioned for me to follow her, and we walked over to it. We were talking for a minute about them and the neighborhood when, by chance, the homeowner came out to walk his dogs.

The two neighbors knew each other and we got into a conversation about the Sears homes. This homeowner is very happy with his. He reports that it’s very well built. The limestone was from a nearby quarry, but the rest of the house was shipped from Sears. Here’s a photo (below) where you can see more of the home, and how it’s built. Very solidly I must say. Note how the limestone pillars go right to the ground. Makes for a good, solid porch. And looks great too!

I love the look of this house. The homeowner has done a fantastic job with the landscaping and upkeep. And, he seems like a genuinely nice guy, who quite obviously loves where he lives.

Our little group of three went our separate ways after discussing a few other homes on the street, and some neighbors as well. It seems that most neighbors know each other on a social level in addition to waving when passing each other on the street. I love that in a neighborhood. It makes for a real sense of community and a feeling of belonging.

Here are some more photos of the other Sears Homes. You can see the similarities, but also the differences. Ribbon windows on the front dormers on two, none on one. One appears to be the same layout, but in reverse with no side dormer. These would have been to the buyer’s customizations. Note the stone pathway leading away from the porch in the lower photo. Nice touch.

All three are well built and beautifully maintained.

Wright also designed several other homes in the area as well. 57 Tillinghast is one of them. It was designed and built in 1908 for Walter V. Davidson, who, like Darwin Martin, was a Larkin Company executive. The similarities between the two homes are evident. Both are examples of Wrights’ prairie style, but the Martin house is more lavish in both its building materials and size. I’ve always heard Isabelle Martin, Darwin’s wife, never cared for the Martin House because of the lack of natural light.

This is not at all an issue at the Davidson home on Tillinghast. The addition of clerestory windows and that incredible bay window on the east side of the house allow for plenty of natural light. Below is a photo I found on Wikipedia of the living room at number 57. No problem with light here.

I admit that when I had that conversation with the two neighbors earlier in my walk, I said that I thought the inside of this home was more impressive than the outside. Well, I take it back. I must have forgotten what it looked like from the outside. The home is stunning. Inside and out. Absolutely stunning. There’s no other way to describe it.

What Else is on Tillinghast?

A lot. There are Craftsman Bungalows, Colonials, Tudors, and Victorians. Here are some of my favorites.

I Should Also Mention…

There is a new build on Tillinghast that has stirred up controversy on the street, and in both design and preservation circles across the city. In 2016 there was a fire at 29 Tillinghast Place. The owners ended up demolishing the home and rebuilding.

There have been reports that there was a lot of debate among the neighbors, and indeed all over the city, about whether demolition was necessary to replace the 1908 prairie style home. The neighbors I spoke to happen to be okay with the new design. We didn’t discuss whether the demo was necessary. The homeowners at number 29 stated in their demolition application that work was done for several months to bring the home back to its pre-fire state, but continual issues caused their insurance company to finally deem the building a total loss.

The new home, pictured below, is completely different from any other house on the street. In my humble opinion, it would fit better on Nottingham Terrace or Lincoln Parkway in terms of both scale and design. I’d also like to see more attention shown to the landscaping. The way it is now, it appears to have been an afterthought.

Look, none of us know for sure what is in the hearts of these homeowners. And everyone has their own opinion on design. Some are educated opinions. Some, like mine, are just a matter of what is pleasing to the eye. But, like it or not, this home is part of the neighborhood. And will be for a long time to come.

Never one to end on a controversial note, I’m going to share a few more shots from my walk. There is so much to see on this street!

I certainly lucked out on this walk. I met up with three residents who were very friendly and also very willing to discuss the architecture, the street itself, and the neighbors. Sometimes, I run into one person who’ll chat a little bit, but these people were friendly. What a neighbor should be. They also know a lot about the other homes on the block, and they know their neighbors. And they also showed a healthy amount of pride in their neighborhood. I like all of that.

This wasn’t a newfound “Oh, I recently met that guy and he seems really nice.” This was more like, “There was a family in that house with six or seven kids, and one of the sons and his wife just bought the house from his parents” type of thing. Everybody knows everybody. People who know each other tend to help each other. That’s a good thing.

I enjoyed getting to know Tillinghast Place better. I fell in love with it all over again during this latest walk. And that Walter V. Davidson house by Frank Lloyd Wright? I think I like it better than the Darwin Martin House. Gah! I’ll get emails about that remark! That’s okay. I never mind getting emails.

Design is a matter of taste. And like I said earlier, some opinions are based on education, some are based on what is pleasing to the eye. Beauty is after all, in the eye of the beholder.

If you’ve never been to Tillinghast Place, take a walk. It’s off of Colvin, just a hop, skip, and a jump from Delaware Park. If you see any neighbors, say hello. You may make a friend.

*Get the book! They make great gifts for family and friends (or yourself!). Click here or on the photo below to purchase.