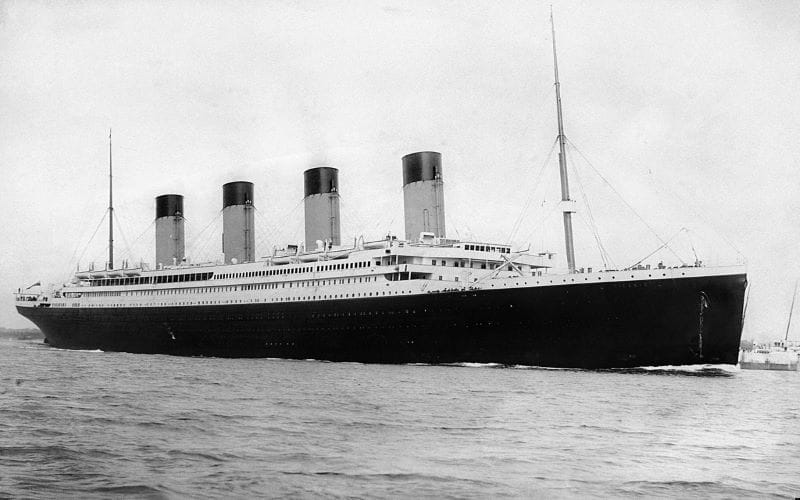 A couple of days ago, I had a quick conversation with our son, Matt, about what to write about next on the blog. He mentioned that I might want to write about the Titanic disaster since the anniversary (April 14-15) was coming up. We laughed and that was the end of it.

Until today. I got to thinking.

Roughly 30 years ago, while visiting his grandparents, our then 4 year old son Matt, picked up a picture book about the greatest disasters of the 20th century. He was particularly enamored with the story of the Titanic. Ever since that day, everything pertaining to the Titanic has been of particular interest to him. And whenever any family member sees anything about the Titanic, we send it on to Matt.

One subject I don’t remember ever discussing though, was whether there were any Buffalonians on the Titanic when it sank. I had heard that there was a Buffalo architect on board, but that’s pretty much it.

So Were there any Buffalonians on Board the Titanic?

As a matter of fact there were two. Well, technically one resident of the city of Buffalo, and one resident of Kenmore, a Buffalo suburb. But really, we’re all Buffalonians, aren’t we? Both have interesting background stories. And both of those stories have the same ending.

The two couldn’t have been more different. But they both ended up in Southhampton, England, at the same time, and both boarded the Titanic bound for Buffalo, where they both called home.

Here are their stories.

Edward Kent was born in Maine in 1854. His parents, Henry Sr. and Harriet Kent, moved to Buffalo in the late 1860’s, where Henry was co-owner of Flint & Kent, an upscale department store, located in the 500 block of Main Street. The Kents were a very wealthy family, and were prominent members of Buffalo society. Which at the time, was substantial.

Edward graduated from Yale University and studied architecture in Paris. He worked in Syracuse until 1884 when he returned to Buffalo to live and work. He designed such notable buildings here as Temple Beth Zion on Delaware Avenue, later lost to a fire, the Unitarian Universalist Church of Buffalo on the northeast corner of Elmwood and West Ferry, and, one of my personal favorites, Chemical No. 5 Firehouse at 166 Cleveland Avenue in Buffalo.

Kent was a confirmed bachelor, and lived at the elite Buffalo Club on Delaware Avenue. He traveled to France and Egypt as part of a two month vacation in the winter of 1912. He actually extended the trip in order to return home aboard the Titanic on it’s maiden voyage. Kent was known to have mingled with other first class passengers aboard the ship, in particular Helen Churchill Candee and Archibald Gracie, both survivors of the disaster.

Kent was likely asleep in one of the first class cabins when the ship hit the iceberg. Shortly after, he was on deck, and by all accounts Kent assisted in the loading of the lifeboats. Helen Churchill Candee encountered him here as she was getting into one. She handed him a miniature portrait of her mother and a silver flask, and asked him to keep them safe.

Sadly Kent went down with the ship. His body was one of those recovered. He was eventually laid to rest in Forest Lawn Cemetery, here in Buffalo.

Henry Sutehall Jr. was born in 1886 in Middlesex, England. His family moved to Buffalo in 1895, via the ship Paris out of Southampton. So, 1912 wasn’t the first time Henry headed to New York City from Southampton. The family settled in Kenmore, on Lasalle Avenue. Henry Sutehall Sr. was a decorative plasterer by trade and worked on many of Buffalo’s finer buildings, including the Unitarian Universalist Church, designed by none other than Mr. Edward Kent. I guess there have never been more than three degrees of separation here in Buffalo.

Sutehall’s mother ran a store at the corner of Delaware and Mang Avenues. She sold everything from cigars to confections, to school supplies, to ice cream. Unusual at the time for a woman to run this type of business when her husband had a separate career. Interesting.

Henry Jr. worked at E. E. Denniston’s in Buffalo as a ‘trimmer’, installing and repairing upholstery in carriages and automobiles. Remember that the Pierce Arrow and the Thomas Flyer were being manufactured here in Buffalo at that time. It was at this job that Henry met Howard Irwin and the two became close friends.

The Trip of a Lifetime

The two young men left Buffalo in January of 1910 to embark upon a trip around the world. According to letters, they spent the first year making their way across the U.S., working as trimmers, and sometimes musicians. Sutehall played the violin and Irwin was learning the clarinet. When they reached San Francisco, they left for Australia. It was here that Henry wrote to family members that he had fallen in love with a girl, had gotten engaged, and planned to return to Australia when the trip was over, to marry her.

Irwin too had found love along the way in the form of a traveling musician named Pearl.

The trip continued with Sutehall and Irwin splitting up and coming back together at least twice before meeting up again in England. Sutehall reportedly arrived in England first in order to spend a bit of time visiting with extended family who still lived in England, while waiting for the Titanic to depart Southampton.

It is thought that Irwin left in a hurry on an earlier voyage home, having received word that Pearl had become ill. (She passed away from pneumonia in October, 1911.) Sutehall was left to gather Irwin’s steamer trunk, as well as his own belongings and bring everything back to Buffalo.

Henry held a third class ticket aboard Titanic. His accommodations would have been quite different than Kent’s. He would have shared a bunk cabin with three other men. When the ship hit the iceberg at 11:40pm on April 14, Sutehall was likely awakened by the sound of it. Even if he had understood the gravity of the situation, he had no chance of getting into one of the lifeboats. He may have made it out of third class when the gates to steerage were finally unlocked at 2am on April 15, but by then all the boats were gone.

Henry Sutehall Jr. perished that night in the sinking. If his body was among those found, it was never identified.

I should mention that Howard Irwin’s steamer trunk was found in the 1990’s during salvage trips to the Titanic, which was located in 1985. There were letters and a diary in his trunk which Henry carried with him onto the ship. They were recovered and restored. Those letters and diary are how we know part of Henry’s story. Those belongings are also among some of the Titanic displays that have traveled the world. They are, in a way, another Buffalo connection.

What began as an offhand remark by my son Matt, has turned into a day of interesting research about two very different Buffalonians. One born to money and privilege, a creator of some of Buffalo’s great architecture, and a first class passenger on the ill fated Titanic. The other born to working class parents, a musician and tradesman, worked his way around the world, and a third class passenger on the same ship.

Both suffered the same fate in the end.

Today, take a moment to remember the lives lost on the Titanic, and the lives saved. How about that girl in Australia, who may or may not have ever heard that her fiancé was among the lost that day? And finally, think about the laws that were changed because of the way the Titanic disaster was dealt with that day.

Find out more about the Titanic disaster at Encyclopedia Titanica.