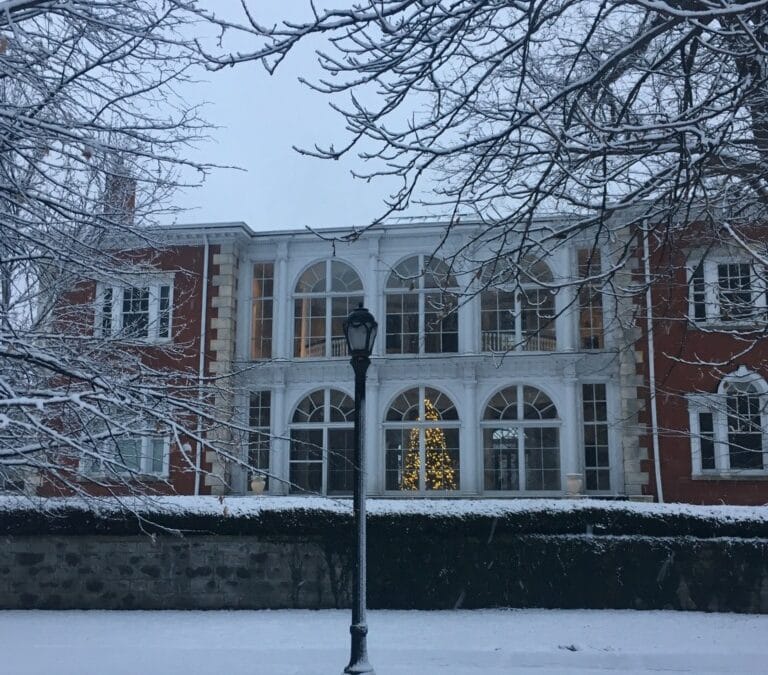 What’s So Great About the Birge Mansion?

The Birge Mansion was built in 1897, and is a Georgian Revival style beauty. It was built for George Birge who wanted the home be modeled after a villa he had seen on the Riviera. It was designed by the prestigious architectural firm of Little and Browne of Boston, Mass. The center of the building holds two tiers of three arched windows each, supported by Tuscan columns. The lower windows hold several doors which open to a grand terrace, which induces some of those daydreams I’ve spoken of in other posts. These dreams include formal parties where elegantly dressed movers and shakers of Buffalo society move gracefully from the ballroom to the terrace outside for a breath of fresh evening air and a chat with other guests.

But, alas, time travel is still not yet possible, and I remain firmly in the present.

George Birge was born in Buffalo in 1849. Upon his graduation from Cornell University, he entered the wallpaper business of his father, Martin Birge, founded in 1834. He was soon admitted as a partner in the firm, where he stayed until 1890 when it was sold to the National Wallpaper Company.

In an unusual move, the original owners bought back the business in 1900, creating M. H. Birge & Sons Company. George was named President. The company was well known for it’s 12-color process of wallpaper production.

On a side note, the M. H. Birge and Sons Company hired a young Charles Burchfield to design wallpaper early on in his career. He would go on to become a nationally known painter lauded for his passionate nature scenes and cityscapes. The largest collection of his paintings are in the Burchfield Penney Art Center here in Buffalo.

Back to George. Like so many businessmen, George had his hand in several pots during this period. He was a Director and Executive Committee member of the Pan American Exposition held here in Buffalo in 1901. He was also one of the founding members of the Pierce Arrow company, serving as its president from 1908-1916.

George married Carrie Humphrey. The couple had three children, Humphrey, Marion (married to Thomas B. Lockwood) and Allithea (married to architect George Cary). The family entertained often in the home they called “The Circle House” for it’s position on Symphony Circle. George passed away in 1918. The family lived in the house until 1938.

Times Change for the Birge Mansion

The Sisters of Divine Child Convent purchased the mansion in 1938. It became an Elk’s Hall in 1957. By the mid 1970’s, the building had fallen into disrepair and was boarded up. It became a flop house. The homeless moved in. There are stories of campfires in the fountain, inside the building! Can you imagine?

Thankfully, a group of investors purchased the building in 1982, and the mansion underwent an initial renovation. Eventually, it came into the hands of the Buffalo Philharmonic Orchestra.

In 2004 the law firm of Spadafora & Verrastro purchased the mansion. The firm began renovations almost immediately. The plaster caps on all the columns were redone. The original balustrade with its mahogany handrails was successfully replicated. The restoration of the magnificent windows and doors leading to the terrace was completed. The work was well done and looks beautiful.

They also replaced the tile floors in the loggia, which is the room with all the windows and glass doors, with hardwood. In my humble opinion, there could have been an effort to replace tile with tile in this space. There are knowledgeable craftsmen who know how to replicate historic flooring. If this wasn’t feasible for whatever reason, at the very least the new hardwood should match the mahogany color of that amazing handrail, and should be in keeping with the period of the house. This is not a criticism, just an opinion. Like I said before, the place looks beautiful.

Symphony Property Management bought the mansion in 2016, and have thus far painted, replaced some of the carpets and finished the fourth floor. I’m told they don’t have any immediate plans for further restoration, other than continuing to improve and restore this historic home. A labor of love, if you will.

For all the efforts thus far, the place still needs work. Which I am sure the current owners are well aware.

Although the reception room on the first floor still has original Birge wallpaper (it’s gorgeous), the original fireplace has been replaced, or covered over. It would be nice to see it restored to the original design. The ceiling was updated at some point with plaster work. It makes an already low ceiling seem even more so. It could be removed as it was not original. But not if the wallpaper would sustain damage during the work.

The original floors just inside the door appear to be in decent shape. If you look closely, you’ll see that this work was done before tiles came in sheets. You can see that each tile was laid individually. If you look closely, they don’t appear to have been done perfectly. Perhaps the house ‘settled’ causing the look we see here. I would hope that is the case. Either way, I love this floor. It has character.

There is a room to the right of the entry hall on the first floor that also needs restoration. I can’t for the life of me imagine what it was originally, and it doesn’t appear that there are any surviving photos. It can and should, however, be done in such a way that both meets the needs of the current use (offices), and is in keeping with the history of the mansion.

The third floor as well requires some attention. And there are these two cool offices five or six steps up from the second floor, but not actually on the third floor, that look out over the open loggia. They’re amazing, but could use a little bit of attention. Love old homes for just these sort of spots!

This certainly seems to be the case with the Birge Mansion. Built during our heyday, it became one of the social centers of Buffalo society. Looking at some of the older photos, it’s easy to see why. What a gorgeous place to spend time. Especially that terrace! During the city’s hard times, we nearly lost the this place.

I know I’m not alone when I express sincere gratitude that this mansion still stands, and is still being used and loved today. Because I have been through the building and have spoken to my friend who works there, I have every reason to believe that the work will be done tastefully and with respect to the original vision for the home. The people who are using the Birge Mansion today appreciate it for what it is. A true Buffalo treasure.

What more could we ask for? When you’re out and about near Symphony Circle, pay special attention to the Birge Mansion at number 2. This is one to watch. And while you’re there, take a moment to daydream a little about the way it used to be.

Check out this music video filmed in the mansion, by Mad Dukez & Fresh Kils – “Sookie Sookie” Love it!