Last week , my cousin offered me a pretty cool opportunity.   She offered to turn the tables and take me on a tour of the building where she works.   Since I’m always up for a tour of just about any building, I jumped at the chance.

Her building is the Fidelity Trust Building, now known as Swan Tower.   I’ve walked by it literally hundreds of times, and I admit I had no real expectations going in.

We set it up for this past Wednesday and as I parked I realized I had a clear view of the building.  I stepped out of my car and immediately snapped a few photos.   I had never really looked closely at it, but I thought, “it’s nice”.

As I approached, I looked at it with fresh eyes, I noticed for the first time the attention to detail.  I should have known. The architects were Green & Wicks, a very talented, prolific architectural firm here in Buffalo.  One of the best.   My eye was drawn up to the protruding cornice, the egg & dart and the dentil moldings, the ionic columns.  The list of architectural details is long and I won’t bore you with it.   Instead I’ll share my photos.

My cousin met me in the lobby of 290 Main.   There are two addresses, 284 & 290, but she took me right back outside to begin the tour.  She explained that the corner used to be known as ‘The Weed Block’ before this building was built, named for Weed & Company Hardware, located within the block.  Below is a photo of the Weed Block Building that used to be on the site of the Fidelity Building. 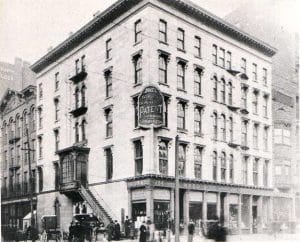 Side note regarding the Weed Block Building.  It was apparently a mix use boarding house and office building. Grover Cleveland moved into ‘room F’ of the Weed Block Building in 1873.   His law firm Cleveland and Bissell (at the time) moved in to the same building the following year.   Cleveland never owned a home during the nearly three decades that he lived in Buffalo.   He instead lived in several boarding houses.   This was one of them. 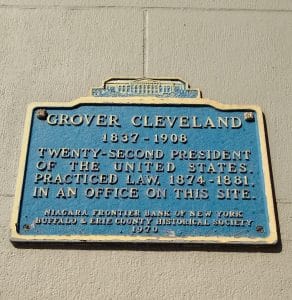 Wikipedia also reports that Millard Fillmore practiced law out of the Weed Block Building as well.

We entered the Fidelity Trust Building through big brass doors and then a revolving door at 284 Main.  Both sets of doors are beautiful I might add. 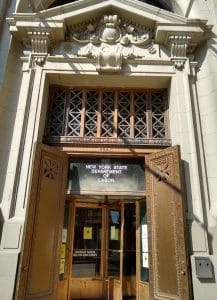 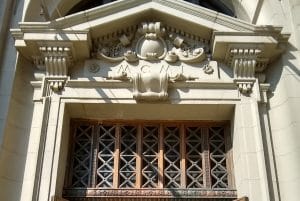 Now I know why we went back outside. To re-enter through 284.

Upon entering, I instantly became a tourist in my own city.  I’m pretty sure my mouth was open as I took it all in. I almost forgot to breathe I was so blown away.   So unexpected!   If it wasn’t for the modern cubicles I would have thought I had stepped back in time. The ceilings are nothing short of magnificent. And the columns.  Seriously. 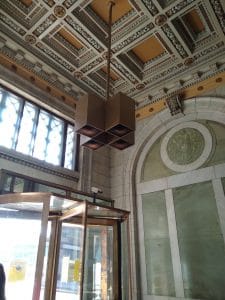 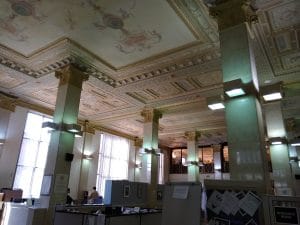 There are still some remnants of the bank for which this building was built.  For example, the brass bars, or cage if you will, in the photo below most likely enclosed the internal vaults, and the heavy brass doors that were undoubtedly there for security. 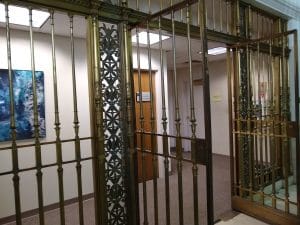 The mezzanine level is just as beautiful.   We visited every floor.   Some were more interesting than others, but I did notice that the decoration stopped above the mezzanine  floor.   Which was typical in a building of this sort.   There were smaller details in the upper floors, but the ornate ceiling designs were mostly on the first and the mezzanine floor, the somewhat open ‘second’ floor, which overlooks the first floor. 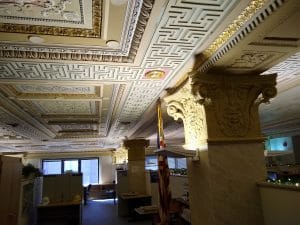 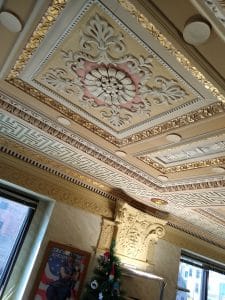 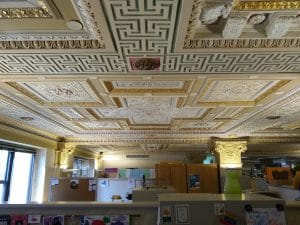 The exception was a conference room on the true second floor above the mezzanine level, which seems like the real second floor. Confusing?   It is when you’re inside. 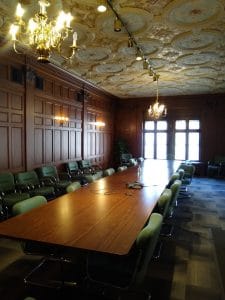 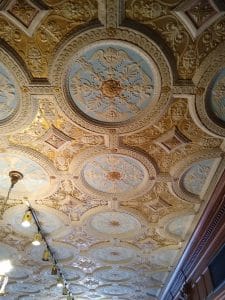 It feels like the buildings on this block sort of wrap around each other, and it’s tough to figure out when you’re inside.   Some are joined on the inside, some are not, and we found that they do not meet in the center.   There is a courtyard of sorts in the center.   From this view below, you’re hard pressed to figure out which building is which. 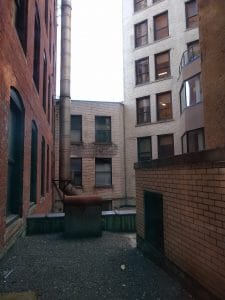 Let’s change gears over to a short version of the story of Fidelity Trust.

In May of 1893, well known Buffalonian John Albright, along with George V. Forman, John Satterfield and Franklin Locke, founded the Fidelity Trust Company.

The Fidelity Trust Building was completed in 1909. 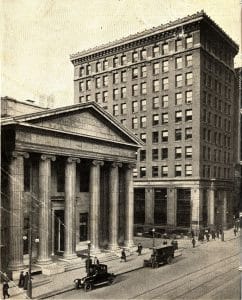 Photo from “Views of Old-Time Buffalo”, p. 32.   Shows the former M & T Bank in the left forefront, and The Fidelity Trust Building to the right.   This is the M & T Bank Building whose marble ruins are at Wilkeson Point.

The two banks came together to form Manufacturers and Traders Trust Company, or M & T, which has maintained a strong presence in Buffalo to this day, although they no longer have a location in the Fidelity Building.

In 1926 the western three story addition was added to the Fidelity Building, and interestingly enough was designed by E.B Green & Sons, William Wicks having passed.

The Ellicott Development Company acquired the building 1989, and they have referred to it as Swan Tower ever since.  They completely renovated the building including the meticulous restoration of those amazing hand painted ceilings.   So glad they did!

What a treat this building turned out to be!   Thanks for the tour Cousin Barb!   Just goes to show that you can’t and shouldn’t judge a book by it’s cover.   Check out The Fidelity Trust Building (Swan Tower) at the Northwest corner of Main and Swan Streets.  If you run into Barb, tell her I said hello! 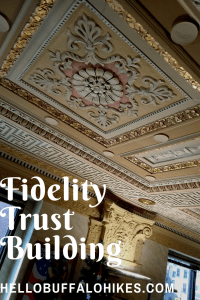