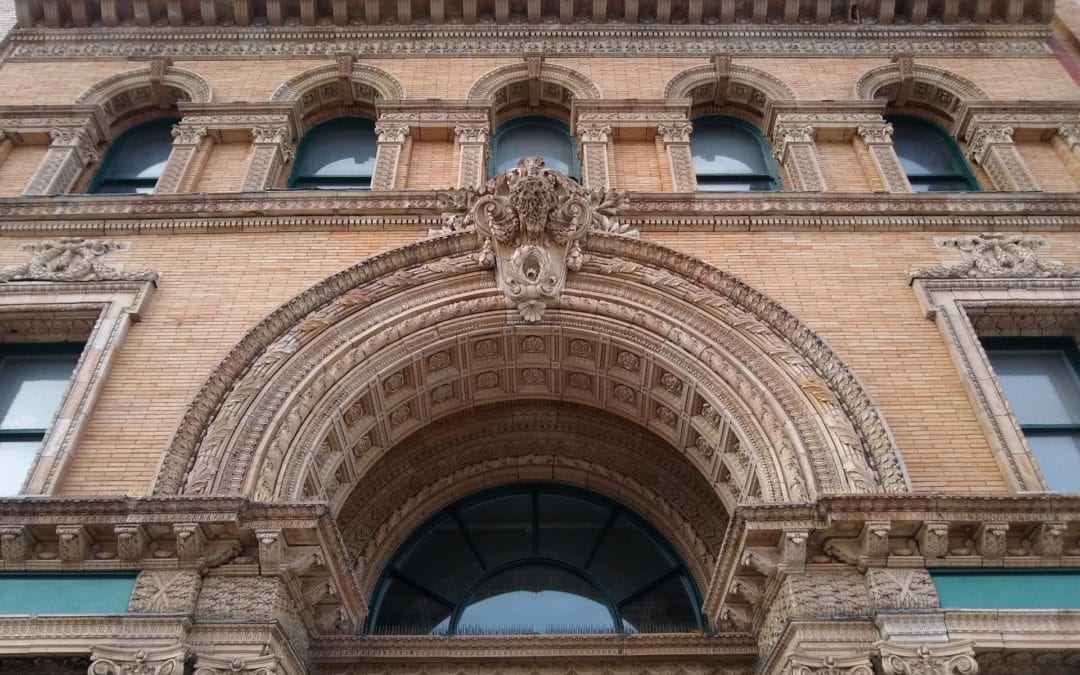 My First Foray into Urban Hiking

I clearly remember the first time I saw the Market Arcade building on Main Street in Buffalo.  My Father and I went for a long walk in Allentown. It seemed like we stopped to chat with everyone we met along the way. One man who had a narrow flower garden along one side of his driveway was particularly interesting.  He and my father spoke about how rich his soil was, about composting and coffee grounds. They were agreeing about how healthy the soil was, when the young man picked some of it up and tasted it. The soil. He ate it! My father just laughed and we continued on our way.  Funny, the things you remember.

That same day we drove over to Main Street, got out and walked up one side of the street and back down the other.  I saw Shea’s for the first time that day. Also Fountain Plaza, the Goldome Bank Building (Buffalo Savings Bank at the time), the Electric Tower and everything in between.

On the way back to the car, we stopped in front of the Market Arcade.  I don’t remember what my father had to say about it, but I was struck by the ornamentation all over the building.  I thought it was probably the prettiest thing I had ever seen. That’s really saying something, because I had just seen that magnificent gold roof on top of that other building!

I fell in love with my hometown that day. Can you imagine? It was the early 70’s! Buffalo was well into it’s decline. Nevertheless, I fell hard. The buildings and the people won me over.

The Market Arcade was built in 1892, and it was designed by the architectural firm of E.B. Green & William Wicks, who are arguably the most prolific architects Buffalo has seen to date. The Arcade is three floors of shops and offices connected by a long narrow atrium, which is covered with frosted glass, giving the interior both protection from the elements, while providing soft, even light that helps to create the comfortable vibe within.

Like the Ellicott Square Building, both the Main Street and Washington Street facades are identical. They feature columns, arches, intricate ornamentation, and bison heads, celebrating the neo-classical architecture that was so popular in the country at the time.

The Arcade is Buffalo’s only historic indoor shopping space. It was built for G.B. Marshall, who suggested that the building be modeled after the Burlington Arcade in London, which was designed to connect to it’s surrounding neighborhood. That way it maintains close ties with the street life around it. Having two identical entrances, both on busy streets, Buffalo’s Market Arcade followed suit.

Although I’ve always used the Market Arcade in this way, entering from one street, taking care of business, and leaving through the other door to continue my errands, I never realized it was designed to do just that. On the Main Street side there were and are numerous businesses, offices and apartments, and on the Washington Street Side there used to be the Washington Market, also known as the Chippewa Market, when the Arcade was built. The many people passing through one entrance to get to the other had to be attractive to the small businesses renting space in the building. It meant for a lot of foot traffic.

The Washington Market property (which was well-known back in the early 1900’s as the largest market west of the Hudson River) was sold by the city in 1965 to be used as a parking lot for the Buffalo Savings Bank. Remember that gold dome I mentioned earlier? That’s the one.

Seeing the photo below, and knowing my desire for time travel, I wish I could step back in time to do some shopping at the Washington Market. Just for one day…

Here’s an interesting Buffalo tidbit. A young Common Council member opposed the sale of the market to the bank. He was quoted in an article in the Buffalo Evening News on February 24, 1965, saying, “I can’t see where we’re going to get any real value out of a bank parking lot.” His name was none other than Jimmy Griffin, who went on to become mayor of Buffalo, serving 16 years.

After the sale, foot traffic decreased greatly, and tenants began to leave the Market Arcade. Buffalo was declining as a whole by then as well, which I’m sure did not help the matter. Hence, in the 1970’s the building was shuttered. So the sale of the Washington Market contributed to the loss of at least two Buffalo institutions. Say what you want about Jimmy Griffin, but he was certainly right about this one.

The Comeback of the Market Arcade

Eventually, the city acquired the Arcade in a bankruptcy hearing, and by the mid 80’s a restoration was underway. It was completed in 1995.

Use of the Arcade slowly but surely increased. In 2013 the city put the building up for sale. It was purchased by Sinatra & Co. Realty in 2014 for $1.4 million. And while they have done a good job with the interior of the building, in my opinion, the exterior could use some attention. It appears to need a good cleaning at the very least. It’s too beautiful a facade to let it go.

In 2015, Sinatra also acquired the adjoining building and turned the first floor into the Expo Market, an upscale but affordable downtown food court, including a full service bar. Every time I go in, it seems to be doing well. The restaurants here offer a wide variety of foods. And the food is impressive. Certainly there is something for everyone. In a way, the Expo represents the eclectic food scene for which Buffalo is becoming well known.

The memories of the day my father and I took that walk are etched in my mind.  It was the beginning of my lifelong love affair with urban hiking, and with Buffalo itself. It was also quite possibly the day I developed my tendency to speak with people I meet on the street!

So, next time you need to get some shopping done, or just feel like taking a walk, head over to the Market Arcade on either Main or Washington Streets near Chippewa. Peruse through the interesting galleries, shops and businesses that make their homes here. Next, grab a bite and a beer at the Expo Market in the adjoining space. Afterwards, take in a movie at the still new AMC Market Arcade 8, next door to the Expo. Seriously, it’ll make for an interesting day.

And because all of the businesses here are locally owned, you’ll be helping to build a strong community. But you already know that.

And don’t forget to chat with the people you meet. After all, this is Buffalo, and we’re a friendly city. You never know, you may make a lifelong memory for yourself, or for someone else!