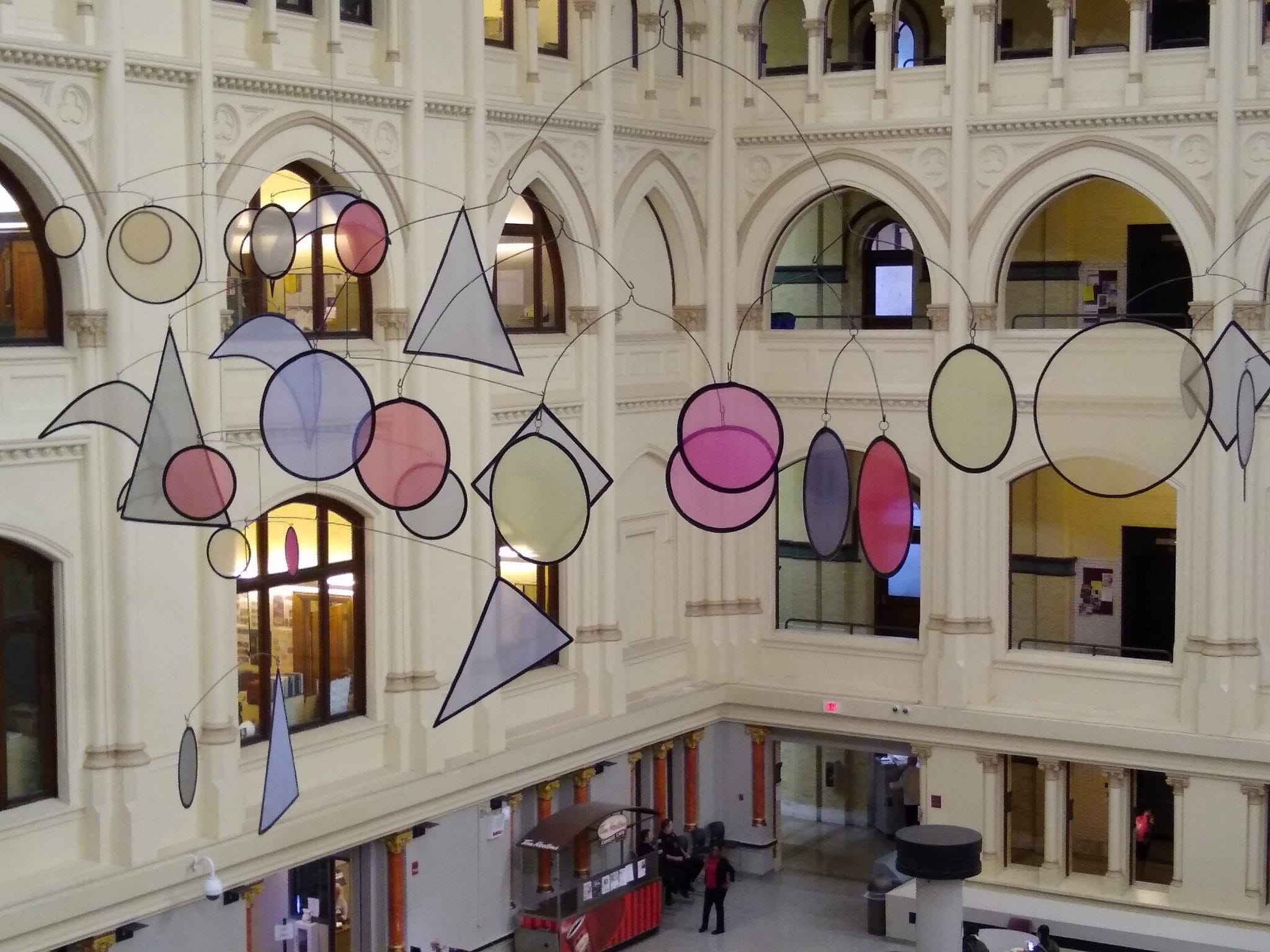 Thomas Jefferson appointed Erastus Granger as the first Postmaster General of Buffalo when we were just a small village.  Buffalo’s first post office opened in 1804, the same year Joseph Ellicott laid out the unique radial streets design of the city of Buffalo.

Granger set up shop at a desk in Crow’s Tavern, located at the southwest corner of what is now Exchange and Washington Streets.   Remember that at this time a tavern was more than just a place to grab a drink and a quick bite. To a small frontier town, the tavern was the place to get the latest news or pick up much needed items for frontier life.   The tavern even acted as a polling place at times and in this case, it was a post office as well.   We didn’t have a dedicated building for our post office until 1837, when a building was purchased at the corner of Washington and Seneca Streets.

Between 1804 and 1890 Buffalo grew by leaps and bounds.    The opening of the Erie Canal brought incredible amounts of commerce to the city. And there were plenty of entrepreneurs in Buffalo who capitalized on the opportunities that came our way in the forms of shipping, grain processing and trade, brewing, railroads, and eventually automobiles and aeronautics.  Not to mention the smaller industries that supported all of those giants. Our population soared from just over 1,500 in 1810 to over 255,000 in 1890. That’s an enormous amount of growth in a relatively short period of time.

By 1890 we were ready for a larger post office, and it was also decided that Buffalo needed a federal building here in the city.  Jeremiah O’Rourke, who was a federal architect, made the initial design for the building.

Before it was even built however, our post office caused quite a stir among architects in the U.S. at the time.  The Tarnsey Act, which went into effect in 1893, required an architectural competition for any major federal project.  The act was seen as a way for private architects to have a shot at large federal contracts.   Our post office was the first building to begin construction after the act became law, although it was already in the works beforehand.

Private architects were up in arms at having lost the chance to compete for a project of this magnitude. The federal government asserted that O’Rourke’s plan was submitted and had been approved prior to the enacting of the law, and therefore the building of the Post Office moved forward as planned.

They broke ground in 1894 amid the controversy.  Daniel Burnham, president of the American Institute of Architects at the time, reportedly called the plans for the building “inferior and unworthy”, and maintained that stance even after it was built.  Some say his opinion was clouded by the fact that private architects were not allowed to bid on the project. What do you think?   Inferior?   Unworthy? 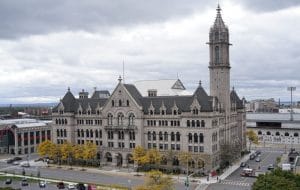 In 1897 William Aiken and James Knox Taylor (both government architects as well) came on to the project and helped see it to completion.

The style of the building can be described as Victorian Gothic/Richardsonian Romanesque, and it was built with Pink Maine Granite.  Look closely in person and you’ll notice the pink hue. There are 400 windows, and the roof is Spanish green tile laid in concrete.  The tower rises 244 feet above the street. Hand carved gargoyles, pinnacles, finials, animal heads and eagles are on each of the facades.  Note the bison heads that are included on the facade, obviously a nod to our fair city. 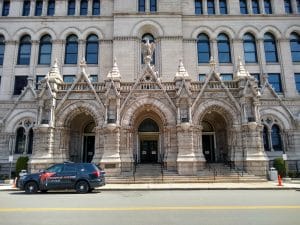 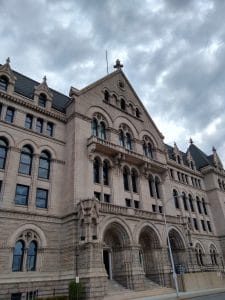 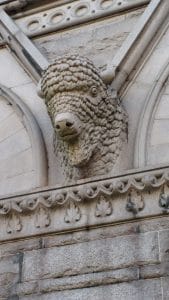 When I stand outside the main entrance on Ellicott Street, to me it looks like a federal building.  A very grand federal building. Maybe it’s that eagle standing watch over the doors, I don’t know, but what I see is grand. I know I definitely do not see inferior or unworthy. 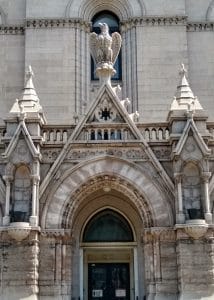 And the inside.  Wow.   I could not have been more surprised the first time I walked in. One of those times you instantly become a tourist in your own city.

There is  a six story atrium.  The immense skylight was originally intended to allow light onto the mail sorting floor directly underneath.  The hallways on the first floor form a Gothic colonnade with clustered marble columns. The effect has me awestruck every time I see it. There are holes in the arches for light bulbs to aid with lighting.  Everywhere I look there is evidence of the effort put in during this time period to light up a building. The massive atrium with its skylight, the arched open hallways on the upper floors which are reminiscent of a Venetian Palazzo, the glazed white tiles on the walls designed to reflect light, the large windows above the office doors.  So much care was put into this effort at the turn of the 20th century.   It’s something we take for granted now, the ability to cast light whenever and wherever we choose. 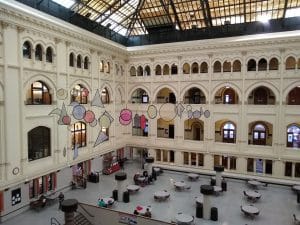 The terrazzo and marble floors are impressive, and are charmingly worn in front of the mail windows just inside the main entrance.  Once can almost imagine people coming and going to drop off and pick up mail during the building’s heyday, standing in front of the windows conducting their business.  Across the way there are handsome wooden desks used, I’m sure, for addressing mail and the like. Running my hand along them, the wood is worn smooth from all the years of use, and the floor is similarly worn in front of these as well.  This of course, causes me to daydream about all the people who’ve stood here before me.   Have I mentioned how these old buildings cause daydreams? 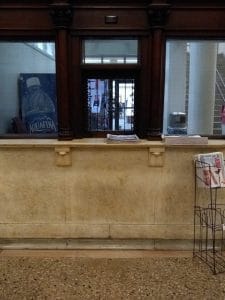 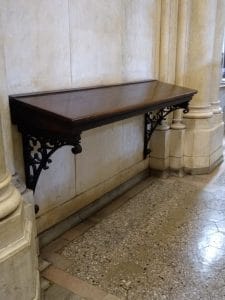 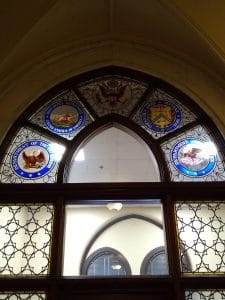 Slowly over the years the different branches of the government moved out of the building to other buildings in the city, or out of Buffalo altogether.   The last to go, the Post Office, left in 1963 to move to a more modern facility on William Street.  The building sat empty for some 15 years.

Enter Joan Bozer & Minnie Gillette, members of the Erie County Legislature.  (It is notable that Minnie Gillette was the first African American to be elected to this office.)  The two women worked together to propose that Erie Community College’s City Campus be moved from its location on Ellicott Street in the Masten District to the Old Post Office Building right in the heart of downtown. 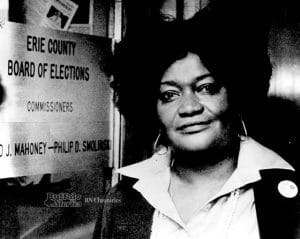 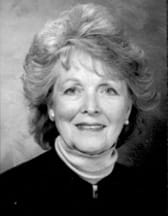 The two women worked tirelessly to ensure that this treasure did not fall victim to the (at the time) rampant demolition of historic buildings in Buffalo. There were many who wanted the building demolished as an ‘eyesore’.   Can you imagine?

“Indeed, in a 1969 letter urging Rep. Thaddeus Dulski to tear down the structure, former Erie County Democratic Chairman Peter Crotty ”“ a politician of sweeping influence ”“ called the post office “a mongrel structure of no authentic period, dungeon-like in its aspect, repellent to the visitor and lacking in the convenience suitable for habitation.”  The building, Crotty argued, was “a monstrous pile of death-like stone.”” *

Wow.  Tell us what you really think Mr. Crotty.

The argument continued into the 1970’s, while Gillette and Bozer formulated their plan to bring ECC students into an historic building in the heart of the city. 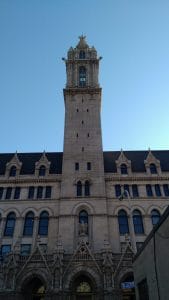 As Gillette and Bozer persevered, they enlisted the help of former Legislature and State Senator Mary Lou Rath in the struggle to save the building.   After a long battle, when the final vote came in 1978, in favor of saving the building and renovating it for Erie Community College City Campus, it was a pivotal moment in Buffalo’s preservation movement.  Along with the saving of the Guaranty Building just a couple of years earlier, some feel that it was at this point that the city turned a corner, from demolition to preservation.

The renovation was done by Cannon Design (who also restored the Guaranty Building) and is perhaps one of the best examples of adaptive reuse in the city.  It’s functional, respectful of the original design, and beautiful all at the same time!   I’ll let the photos speak for themselves. 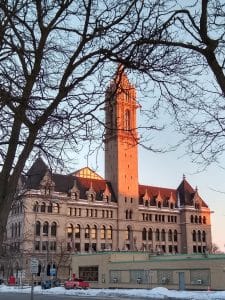 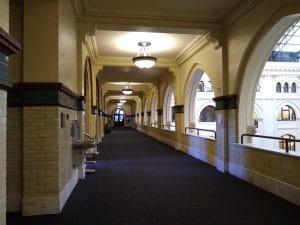 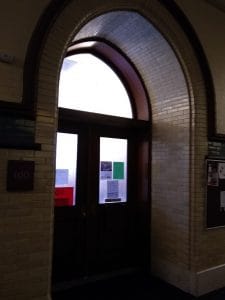 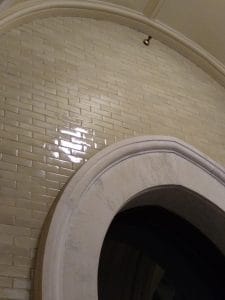 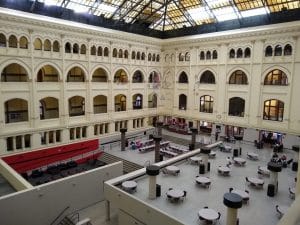 I for one am grateful that Joan Bozer and Minnie Gillette were successful in their struggle to save this treasure and that they persevered when the cards were stacked against them.   Especially as I sit at a table in the open courtyard of the Old Post Office, now Erie Community College City Campus, sipping a cup of tea, and basking in the sunlight that is streaming through the enormous skylight.  I look up at the courtyard itself and for a brief moment, I feel as if I’m in an outdoor cafe in Italy.   A very brief moment, because the building itself is full of students coming and going, grabbing a quick bite between classes, studying for exams, meeting up with friends.  Planning their futures.

I wonder if the students realize how close they came to never seeing the inside of such an American treasure right here in their own city.

If you have a chance, stop by to see this awe-inspiring building, both the outside, and in.   It’s on the corner of Swan and Ellicott Streets. There are a few ½ hour free parking spots on Swan Street across from the building (on the ball park side).  Go on in and take a look at the way our federal government used to build their buildings. You’ll be delighted with what you see!