Two Buildings Nobody Talks About 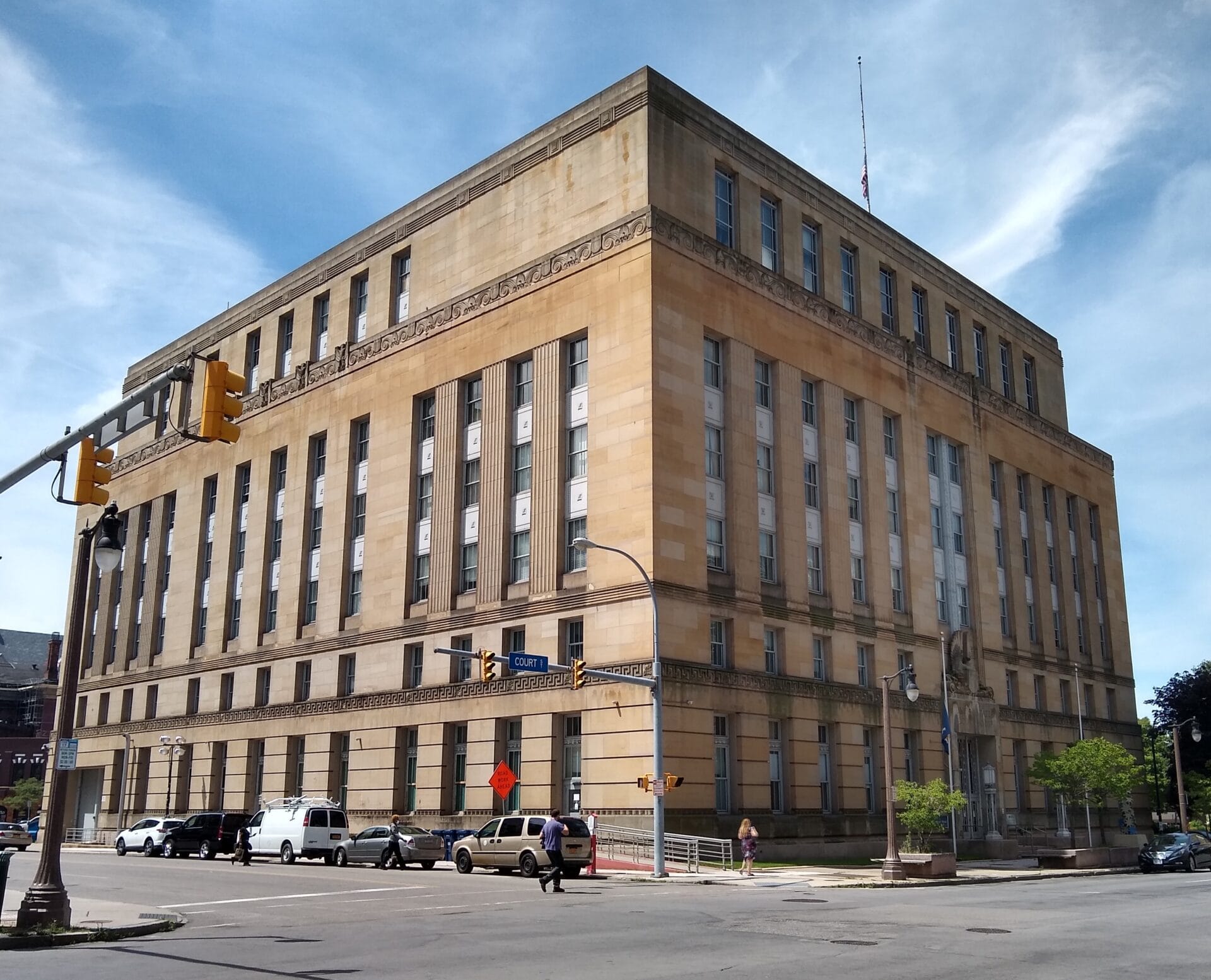 You’re in Niagara Square, downtown Buffalo. You’re with friends from out of town, showing them around. What are you looking at? My guess is it’s not the Michael J. Dillon U.S. Courthouse or the Walter J. Mahoney State Office Building. Am I right?

You know I am. You’re looking at those ‘other’ buildings. And why not? They’re gorgeous!

It’s just that these three buildings get all the credit for being the big draws in Niagara Square. And they are all great. Even the 2011 Robert H. Jackson U.S. Courthouse; it’s beautiful! I’ll admit when they first announced it was being built, I was skeptical. I mean, you can’t blame me, Niagara Square goes way back in Buffalo’s history. Back to 1804. It’s where Joseph Ellicott began when he set out to design our city streets. But this new build fits in nicely here. And of course, the Statler and City Hall have always been welcome in our streetscape.

But there I go, ignoring the two buildings I’m here to talk about. It’s easy to do. In Buffalo, we’re surrounded by such great architecture, that it’s easy to get hung up on all the greats and forget about the others that are exceptional in their own right.

Let’s start with the Buffalo State Office Building. It’s opposite city hall, on the north side of Court Street. It’s on the site of Buffalo’s first Central High School, which was built in 1854. That’ll give you an idea of what this neighborhood was like back in the 1850s. It was a good mix of industry and residences. Enough residences to warrant the school anyway.

By 1914 the industry had taken over enough that the school merged into the Hutchinson building on South Elmwood Avenue, and the school became Hutchinson Central School.

Incidentally, in 1918 during the Spanish Flu pandemic, the Central High School Building was put to use as Buffalo’s pandemic hospital. It was open to flu victims from October until December that year. From September when Buffalonians first started getting sick, until the end of the year over 2,500 people in Buffalo lost their lives to the Spanish Flu. Many of them in the building pictured above.

Back to the Building

The Central High School Building was torn down in 1926 to make way for Buffalo’s State Office Building. The building is a Neoclassical Monumental design, but it’s got some cool art deco details. It was built between 1928-1932. The architects were E.B. Green & Sons, with Albert Hopkins. In 1930 the cornerstone was laid by then Governor Franklin Roosevelt.

In 1982, the name was changed to the Walter J. Mahoney State Office Building. Walter Mahoney was a local state legislator, a Canisius College and UB School of Law graduate. He served for almost 30 years in the State Senate, before becoming a NYS State Supreme Court Judge.

Note from the photos below the use of owls, to signify wisdom and the reliefs of the seals of both the city of Buffalo and the State of New York. And the bison of course. Love, love, love this entryway.

And all of that is just the outside. Enter the building and this is some of what you will be treated to! There are murals all over the ceilings, but are so faded (faint?) that they don’t photograph well.

The Walter J. Mahoney NYS Office Building is, and will remain one of my favorites in the downtown core.

Moving across the street to a building that compliments the NYS Office Building very well, is the Michael J. Dillon United States Courthouse.

This building was built in 1936 as part of the New Deal Emergency Relief and Construction Act of 1932. In a nutshell, the bill authorized the construction of federal buildings across the U.S. in order to put construction workers back to work. It also recognized the impact of the depression on architects, and in some cases, local architects were used for federal buildings.

This is one of those cases. Bley and Lyman worked with E.B. Green and Sons on this building. It’s a perfect complement to the Walter Mahoney building across the street. Then-President Franklin Roosevelt dedicated this courthouse in October of 1936.

This building is the same style as the State Building, Neoclassical Monumental with Art Deco ornamentation. This one, however, is pentagonal in shape, to accommodate the odd-shaped lot, due to Ellicott’s radial street design. It also has more ornamentation. I absolutely love the art deco touches on this building.

The courthouse was re-named in 1987 in honor of Michael J. Dillon, who served as a longtime IRS agent who was murdered in the line of duty.

And now, it’s Buffalo’s new public safety complex, housing both Police and Fire Headquarters. The city acquired the building in 2016, renovations were made and both organizations were completely moved in by November 2018.

The building represents everything the people using them should be, strong, solid, fair. Let’s hope it’s used well in the future.

When I’m out on my urban hikes, I like to look at things I wouldn’t notice if I were in a car, or even on a bike. I’ve admired these buildings for so long now, and I sometimes wonder if other people see them the way I do. I see the intersection of Niagara Square at Court Street as one of the most architecturally cohesive spots in the city. The perfect complement to Niagara Square itself.

Sitting right at the apex of one of Buffalo’s most recognized views, these two buildings largely get ignored. Probably because when you’re looking at that coveted view, the two are on either side of you as you gaze out at the famed McKinley Monument and City Hall.

And the reason these two buildings complement each other so well is thanks to E.B. Green. I like to think he knew exactly what he was doing on that corner. City Hall and the State Building were recently completed when the courthouse was being built. The McKinley Monument was already there, and knowing that everyone would be looking at City Hall, Green designed these buildings to be understated, but fantastic just the same. And the Art Deco ornamentation on them is hard to beat, and a lot of it is similar and even matches on both buildings. I cannot say enough about the ornamentation!

Next time you find yourself near Niagara Square, take a moment to look at these two buildings nobody talks about. Seriously, you’ll be glad you did!

Oh, and p.s. – Scenes from the movie “Marshall” were filmed in the Michael J. Dillon U.S. Courthouse!

*All photos in this post are mine unless otherwise noted.